It won't cost the e-commerce giant much extra to offer the sensor and camera-based systems to retailing rivals that it's already put on the defensive.

It's official. Not content to use the underlying tech powering Amazon Go convenience stores just for its own purposes, Amazon.com (AMZN 1.78%) is now offering its "Just Walk Out" cashierless technology as a standalone product to other retailers. The company made the long-expected move on Monday, by virtue of explaining the tech on its new website.

This next step prompted a number of responses from investors, analysts, and technology privacy hawks concerned the company may now have yet another way to collect consumer data. But by and large, most agree Amazon's Just Walk Out product is a low-risk, high-potential offering that plugs the company into what could be a $50 billion market. 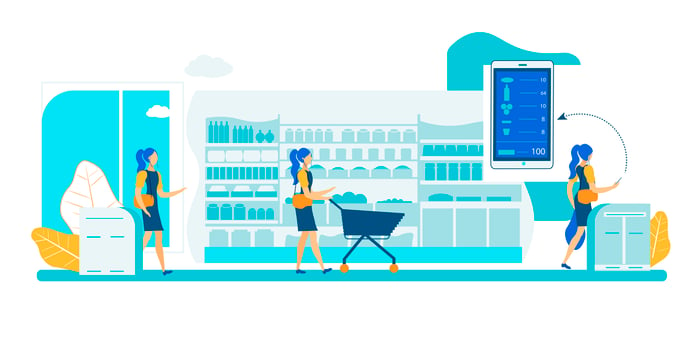 That addressable market figure was offered up by Loup Ventures, and it's in reference to how much retailers could regularly spend on such tech once cashierless technology reaches full stride. Take that total with a grain of salt though, as nobody really knows just how much stores are ready to spend on cashierless options. This is all uncharted territory.

But, in a world where retailers collectively spend on the order of $100 billion per year on point-of-sale (POS) terminals per year, that $50 billion estimate is hardly outrageous. At least it's not out of line if retailers actually want to deliver a completely interaction-free shopping option in the name of speed and convenience. Not everyone believes they do.

Retail Market Insights director Dave Bruno is one of those skeptics. He commented at a recent virtual roundtable hosted by RetailWire:

"Do I see widespread adoption of 'Just Walk Out' technology -- from Amazon or anyone else? Not in the near future, for most categories. It's so expensive to implement, and while the benefits to all retailers -- specifically the detailed data the technology delivers -- are not insignificant, I am still not convinced that the value proposition to shoppers is as powerful in most retail categories."

Bruno wasn't alone in his concern about the sheer cost (which remains unclear) of Amazon's Just Walk Out technology, and the benefit it offers to many types of retailing outside of convenience stores. Other industry experts noted that some shopping experiences still require personal salesmanship.

An idea that's already been legitimized

Still, the prevailing opinion is that Amazon is onto something, even if it doesn't know exactly what -- or the true depth of interest in Just Walk Out. Customer service expert Shep Hyken, Chief Amazement Officer for Shepard Presentations, commented at RetailWire's same digital roundtable "Early adopters of Amazon's technology will reap the benefit of the customers craving convenience. And, like any other technology, we'll see competitors coming in that will level the playing field."

Those competitors are actually already on the playing field, for the record. Convenience store chain 7-Eleven began experimenting with cashierless stores shortly after Amazon did back in 2018. Walmart tinkered with the idea, and although it ultimately canceled its Scan & Go experiment without moving forward,  cashierless options remain on its radar. Microsoft and Kroger are also working together on, among other things, cashierless options.

Were Amazon alone in its R&D and now making a full-blown launch of the service to third parties, it might be something to shrug off. To see so many other companies toying with the same tech though -- even if behind Amazon -- it's clear the premise isn't merely someone's misguided pet project.

A slow but compelling burn

Undoubtedly, Amazon faces a steep learning curve, chock full of worries from retailers that the e-commerce giant also has an ulterior motive -- that is, collecting data from another retailer's customers to poach those shoppers. At the very least, Amazon will have access to a shopper's credit card data, purchase history, and email address. Moreover, even if potential partners could completely trust Amazon, those partners also still face a learning curve of their own, not to mention what's presumed to be a high cost.

Time builds trust though, and it proves the value of a product that will likely become cheaper as time passes. That makes Just Walk Out a compelling growth prospect for Amazon.

It'll be slow going, particularly early on, but this is technology the company has already developed for itself. It costs practically nothing extra to make it available to others, nor does offering it to other retailers pose a great threat to Amazon's market share.

In other words, there's not a lot of financial risk in addressing what probably is a market worth something on the order of $50 billion. Better it takes the lead than let another do so, if only to establish a presence as a new kind of middleman.