The stock market was in turmoil Thursday, and investors severely punished Boeing and Disney.

It was another day of panic on Thursday as steep declines in the major stock indexes tripped a brief trading halt to start the day. The Dow Jones Industrial Average (^DJI 0.00%) was down 7.9% at 11:05 a.m. EDT. The index is now down nearly 27% from its peak, which was hit just weeks ago.

The novel coronavirus outbreak that originated in China was declared a pandemic on Wednesday by the World Health Organization. The virus is rapidly spreading in the U.S., prompting drastic actions to slow its spread. Various universities and school districts have cancelled classes or moved them online, mass gatherings have been banned in some cities and events have been cancelled, the NBA has suspended its season after a player tested positive, and the U.S. initiated a Europe travel ban.

The economic fallout from the pandemic is unknown, and that uncertainty is crushing the Dow. A global recession may be inevitable as economies grind to a halt in an effort to contain the virus.

Individual stocks are getting hammered for exposure to the crisis. Boeing (BA 5.64%) tumbled as demand for travel on airlines dries up, and Disney (DIS 3.69%) was down after an analyst warned about the impact to its parks business. 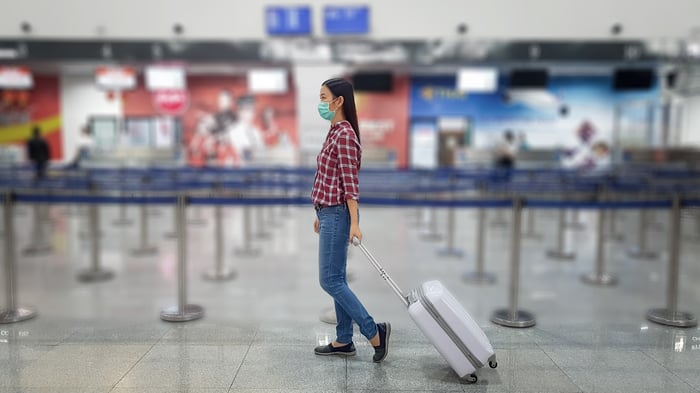 Investors are quickly souring on airplane manufacturer Boeing. The stock crashed nearly 12% Thursday morning as a combination of the 737 Max crisis and the novel coronavirus pandemic weighed on shares.

On Wednesday, Reuters reported that Boeing planned to fix a potentially dangerous wiring flaw with its 737 Max planes. The move comes after Boeing had previously proposed not changing the wiring to the FAA. Boeing does not believe the fix will push back the expected timeline for returning the planes to the air.

The 737 Max news wasn't the only thing hitting Boeing shares. Also on Wednesday, Bloomberg reported the company planned on drawing down its entire $13.8 billion bank loan due to market turmoil. Demand for air travel is slumping as the novel coronavirus pandemic escalates, which could deal a blow in the near term to demand for Boeing's commercial jets.

While shares of Boeing were only modestly punished during much of the 737 Max crisis, the stock is now crashing hard. Shares are down nearly 60% from their 52-week high including Thursday's plunge.

Disney's parks could be hit hard

One of Disney's core businesses could take a huge hit as the novel coronavirus spreads across the United States. Even if Disney manages to keep its parks open, a severe drop in airline travel could crush demand. Shares of Disney were down nearly 11% Thursday morning.

Analysts at Imperial Capital see the coming disruption in the parks business as reason to slash their price target on Disney stock. Imperial lowered its target from $144 to $118. Imperial analyst David Miller estimates that 85% of visitor volume to Disney's Orlando resort is from out-of-state or out-of-country travelers. Nearly all that visitor volume could vanish for a while as the pandemic runs its course.

Including Thursday's rout, Disney stock is now down around 37% from its 52-week high.