Please ensure Javascript is enabled for purposes of website accessibility
Log In Help Join The Motley Fool
Free Article Join Over 1 Million Premium Members And Get More In-Depth Stock Guidance and Research
By Daniel B. Kline - Mar 13, 2020 at 11:39AM

The clothing company was profitable (sort of).

Gap (GPS -6.04%) reported adjusted diluted earnings per share of $0.58 for the fourth quarter of 2019 and $1.97 for the full year. The company made money from its operations but took an "impairment charge of $296 million related to the store assets and operating lease assets of the company's flagship stores," according to its earnings release.

If you add that charge in, the retailer lost $0.49 per share in Q4 and reported full-year earnings of $0.93 per share. The company said the impairment charge was due to the declining value and importance of flagship stores.

"The majority of the impairment charge [is] related to the operating lease assets of the Times Square locations, due to the negative contribution of the individual stores, length of the leases, and the significant decline in the market rents," the company said. 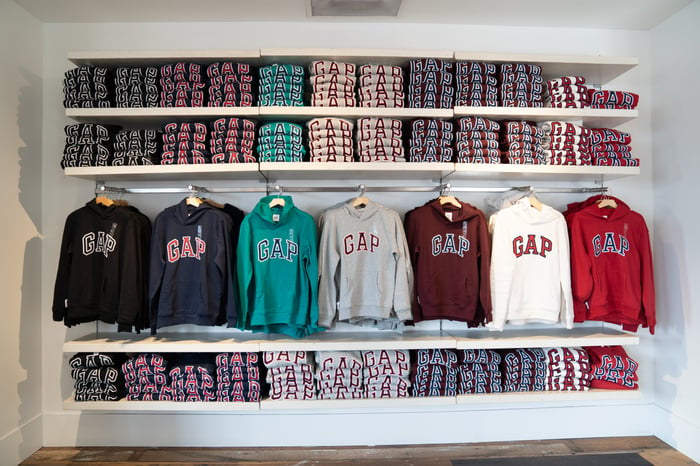 Gap had an OK quarter but has a long way to go. Image source: Gap.

Gap has a new CFO

Old Navy CEO Sonia Syngal takes over the entire company on March 23. She will be joined by her Old Navy CFO Katrina O'Connell who will become Gap CFO. O'Connell's predecessor, Teri List-Stoll will stay with the company for "several months" to help with the transition.

"Katrina brings more than two decades of Gap, Inc. experience, across both brands and functions," said incoming Syngal in the earnings release. "Her command of finance, portfolio management and strategy, coupled with her strong operating capabilities from her time leading inventory management, make her uniquely qualified to take on this role."

A time of uncertainty

The new management team takes over the troubled company with the added wrinkle of having to deal with coronavirus disruptions. That will certainly negatively impact at least the next quarter and will make it hard for investors to judge their efforts for at least a few quarters.