The President asked that state and local healthcare authorities to do everything in their power to fight the virus.

President Donald Trump announced that he has officially declared a state of national emergency over the continued COVID-19 outbreaks taking place across the country. In a much-anticipated news conference on Friday afternoon, the President said the declaration would make it easier for state and local health authorities to react to further COVID-19 cases.

Trump also asked hospitals around the country to activate emergency plans and set up emergency centers for COVID-19 patients effective immediately. He also reiterated the importance of improving America's testing capabilities, and that his administration was working closely with public lab companies like LabCorp (LH 1.71%) and Quest Diagnostics (DGX 0.84%) and the private sector in this regard. 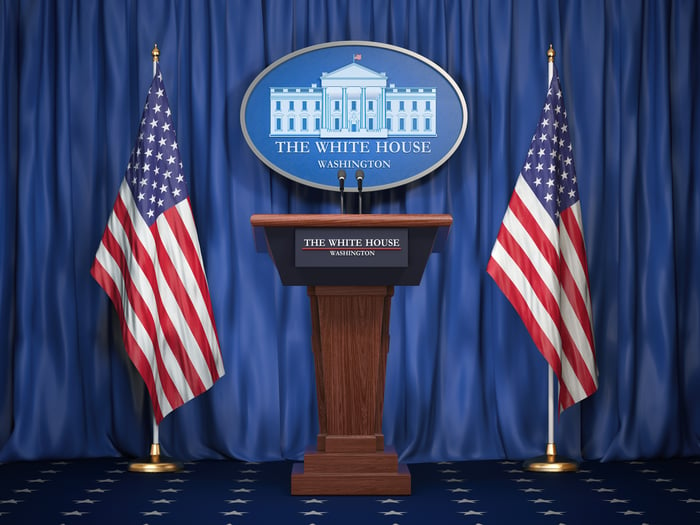 By declaring a national emergency, the President can invoke various disaster programs (including the Stafford Act) that could free up at least $50 billion in extra funding for states. At the same time, an emergency declaration also allows states to request the federal government to cover 75% of the costs involved in paying emergency workers, medical supplies, vaccinations, tests, and other healthcare expenses.

At present, there have been over 132,500 confirmed COVID-19 cases around the world, with the global death count sitting just under 5,000. Currently, the U.S. around 1,250 confirmed infections.

Trump mentioned several companies by name during his statement, including Roche (RHHBY 1.09%) and Google. He also emphasized the importance of telehealth services and the role they will play moving forward in fighting this virus. Shares of Teladoc (TDOC -2.08%) shot up 8.8% immediately following the President's comments.