Please ensure Javascript is enabled for purposes of website accessibility
Log In Help Join The Motley Fool
Free Article Join Over 1 Million Premium Members And Get More In-Depth Stock Guidance and Research
By Rich Duprey - Mar 14, 2020 at 10:00AM

The distiller may be missing out on one of the biggest growth stories in alcoholic beverages.

Jack Daniel's is the largest American whiskey brand in the world and the fourth-biggest spirits brand, but its owner Brown-Forman (BF.A -1.56%)(BF.B 0.69%) is leaving profits on the table.

Although brand extensions like its honey- and recently introduced apple-flavored whiskies enjoy strong underlying sales growth, and a lineup of ready-to-drink (RTD) cocktails helped push net sales to 3% gains last quarter, Brown-Forman is missing out by not having a Jack Daniel's-branded hard seltzer. 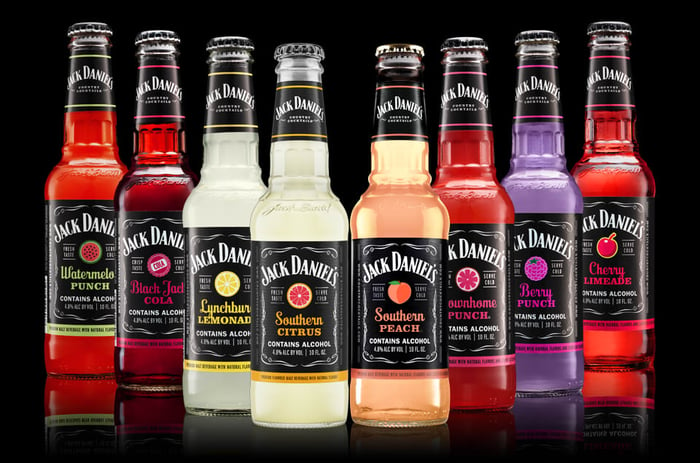 The bubbly beverage's popularity is no secret as the "summer of seltzer" last year turned into the fall, winter, and likely spring of seltzer, too.

Hard seltzer sales are growing at triple-digit rates and are expected to keep expanding at such elevated levels for the foreseeable future. While they have been siphoning drinkers away from beer and wine at an alarming rate -- wine suffered its first drop in sales in 25 years -- spirits have so far been immune from seltzer's effects.

Still, that was only slightly better than craft beer, which, despite the funk it's been in, still managed to see consumption increase 4%. Even low- and no-alcohol beer did better with a 6.6% rise.

At the same time, carbonated RTD spirit beverages are also taking off, with IWSR noting "carbonation has emerged as a new frontier for mixologists and ready-to-drink (or 'RTD') innovators." It points out that traditional sparkling drinks like highballs are seeing a resurgence, while still drinks such as margaritas are springing to life again.

It's also noteworthy that while wine sales overall were down, sparkling wine actually grew in 2019, up 4% year over year.

Because Jack Daniel's own RTD drinks are one of its strongest segments, posting 7% underlying growth over the first nine months of Brown-Forman's fiscal year, breaking into the seltzer market should be a relatively easy task for the distiller. Jack Daniel's sprightly cocktails come in a variety of flavors, including watermelon punch, lemonade, and cherry limeade, among others, suggesting a flavorful seltzer would fit readily into the mix.

Just scratching the surface of potential

Although Mark Anthony Brands White Claw and Boston Beer's Truly dominate the segment with an 80% share or so of the market, there is a tsunami of new options available, particularly from brewers such as Anheuser-Busch InBev, Molson Coors, and Constellation Brands.

It is still a nascent market that analysts see having substantial staying power, particularly because a significant number of markets remain untapped as yet.

Hard seltzer exploded in the U.S. in large part because of the refreshing, effervescent flavors mixed in a timely manner with consumer perceptions that the drinks are a healthier alternative to beer and other heavier beverages. Many believe it can find similar traction in foreign markets because of similar trends witnessed there as well.

Now is the time to act

The wide name recognition Jack Daniel's enjoys would make a branded hard seltzer an easier sell than one of the many new entrants trying to break into the market, and though whiskey is the distiller's mainstay, it also produces tequila, vodka, and wine.

In a market where hard seltzer still has legs, it would be a complementary addition to the portfolio, and Brown-Forman shouldn't be sitting on the sidelines.