Shares of both these top LNG startups have had a horrible 2020. Which is more likely to turn things around?

If you think the oil markets are rough thanks to coronavirus fears and the Saudi Arabia-Russia price war, take a look at the liquefied natural gas (LNG) market. A warm winter, coupled with oversupply and the omnipresent coronavirus concerns, have sent prices reeling.

That's spelled bad news for LNG hopefuls NextDecade (NEXT 3.95%) and Tellurian (TELL 7.24%). As of March 11, these would-be LNG exporters have seen their share prices fall by 68.2% and 87% year to date, respectively. That could mean these stocks are bargains...or about to go bust.

Let's take a closer look at these industry up-and-comers to see which looks like the better buy right now. 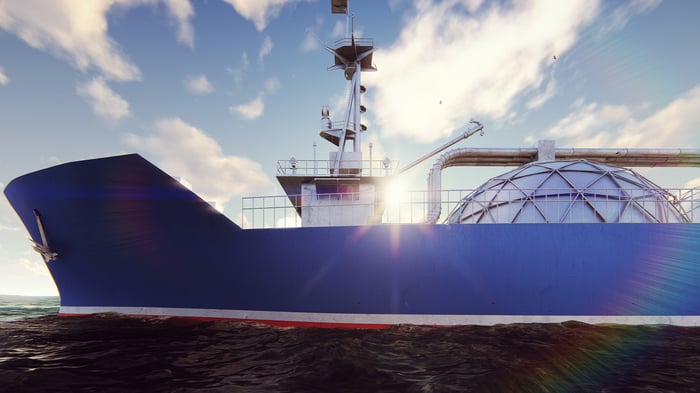 The companies have similar plans. Each hopes to build an LNG export terminal on the Gulf Coast, and a gas pipeline to supply that terminal with cheap natural gas. Tellurian's project (pipeline and terminal) is called "Driftwood," slated to be built in Louisiana, while NextDecade's terminal is named "Rio Grande," and would be located outside Brownsville, at the southern tip of Texas.

One more similarity between the companies: both had planned to have reached a final investment decision (FID) on their terminal projects and started construction by now. But they've been bogged down by delays. Now, both companies are trying to secure enough commitments for their projects' capacity to move forward with an FID.

Tellurian has announced it needs to secure commitments for 10.5 million metric tons per annum (mtpa) to move forward with Driftwood. NextDecade has been more circumspect, but according to a company representative, NextDecade can move forward with as few as two "trains" of production capacity at Rio Grande, or approximately 11 mtpa. Under current market conditions, NextDecade would need to secure capacity for the vast majority of those two trains, or about 10 mtpa, before making an FID.

What it's gonna take

So, how close are they to the elusive FID? Well, each company has secured a definite investment from an oil major: NextDecade has a commitment from a Royal Dutch Shell subsidiary to purchase 2 mtpa of Rio Grande LNG, while Tellurian has signed a contract with French oil major Total for 1.5 million mtpa of LNG from Driftwood.

In September, Tellurian announced a memorandum of understanding (MOU) with Indian LNG importer Petronet for another 5 mtpa. That's now up in the air after the companies extended the deadline on a final commitment from March 2020 to May 2020. Adding insult to injury, Petronet revealed in December 2019 that it was also in talks with NextDecade about potentially buying Rio Grande LNG as well.

In other words, in terms of firm commitments (which, investors know, are the only ones that really count), NextDecade is slightly closer to its goal than Tellurian. If the Petronet deal goes through as outlined in the MOU, though, Tellurian would be much closer than NextDecade (at least, as far as we know now). But Petronet could jilt Tellurian for NextDecade, too, which would upend the equation.

Making things even more complicated, the clock is ticking.

Tellurian -- now short on cash -- has been forced to take some drastic steps to keep the lights on while it courts potential project partners. The company cut almost 40% of its staff in an effort to preserve capital. It's also undergone a management reshuffle.

While both companies are burning cash, Tellurian's financial situation looks more precarious. According to its most recent 10-K filing, the company only had $64.6 million of cash on hand at the end of 2019, but it had burned through $115.1 million in cash during the year. The company also has $136.7 million in long-term debt on its books, some of which is scheduled to come due in May 2020. Tellurian is working to extend that deadline.

Tellurian has limited options for raising further cash. With shares currently trading for less than $1, the company would have to issue tens of millions of shares to raise a meaningful amount of capital, which would substantially dilute the value of its 218.8 million existing shares. More debt is likely to be expensive to take on, given the company's current financial situation. Tellurian's best bet is to shore up its Driftwood funding quickly, if it can.

NextDecade, on the other hand, is in a comparatively stable financial position. The company had $15.7 million in cash and $62.2 million in securities on its balance sheet as of Dec. 31, and no debt. It burned through $40.7 million in operating cash flow in 2019, but was able to cover that by issuing new shares, and so finished the year cash flow positive. The recent sale of its Rio Bravo pipeline to Enbridge will provide an immediate $15 million injection of cash when the deal closes, which is slated for this quarter. NextDecade can't wait around forever, of course, to make an FID, but it has a bit more wiggle room than Tellurian.

With a slightly higher amount of committed funding for its signature project, and a superior balance sheet to tide it over until an FID, NextDecade looks like the better buy.

However, we won't know who's actually going to be the winner for at least three years. That's because even if one of these companies secures its funding and makes its FID tomorrow, it will be 2023 -- at the earliest -- before it can begin exporting LNG. And with unforeseen hurdles and project delays to be expected, it's probably going to be 2024 or later before an investment in either company is likely to come to fruition.

Investors should still regard both of these investments as speculative, and should steer clear unless they have a high tolerance for risk.