Please ensure Javascript is enabled for purposes of website accessibility
Log In Help Join The Motley Fool
Free Article Join Over 1 Million Premium Members And Get More In-Depth Stock Guidance and Research
By Aditya Raghunath - Mar 16, 2020 at 11:14AM

The cannabis stock has lost significant market value due to a sequential decline in quarterly sales, mounting losses, and the broader market sell-off.

Shares of Canada-based cannabis company Tilray (TLRY) have moved 90% lower over the past year. Tilray went public at $17 per share in July 2018 and touched a record high of $300 in intra-day trading a couple of months later. The stock is currently trading at a record low of $3.40, which means it has lost a staggering 98% in market value in approximately 18 months.

Most pot stocks in Canada are trading close to 52-week lows because of several issues. They have been affected by lower-than-expected demand, mounting losses, regulatory issues, health worries about vaping, the slow rollout of retail stores in major Canadian provinces, cannibalization from the illegal market, high inventory levels, and more.

In 2020, Tilray shares are down 80%, driven by the broader market sell-off and its less-than-impressive fourth-quarter performance. In the fourth quarter, the company reported sales of $46.9 million, a decline of 8% sequentially. Its net loss fell from $31 million in Q4 of 2018 and $36 million in the third quarter of 2019 to a mind-boggling $219 million in the December quarter of 2019.

Tilray's revenue decline was attributed to a fall in the company's recreational and bulk cannabis segments. It also posted a non-cash impairment charge of $112 million related to its agreement with Authentic Brands Group. 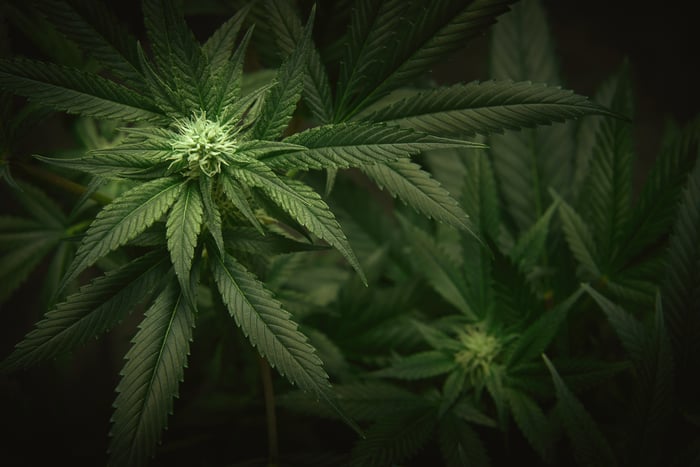 Tilray has managed to build a diversified cannabis business across its core markets that include the global medical space, Canada's adult-use market, and the hemp segment. Medical cannabis accounted for 16% of total sales in 2019, while adult-use products and hemp each accounted for 36% of sales. The other 12% came from bulk product sales.

In the fourth quarter, Tilray's hemp sales accounted for 40% of total sales. This was driven by the company's acquisition of Manitoba Harvest in March 2019, in which Tilray got access to 17,000 retail stores in North America.

Tilray's medical cannabis products are available in 15 countries, and its hemp products are found in 20. It claims to be the only cannabis company to have GMP-certified (good manufacturing practice) cultivation facilities in two countries, Canada and Portugal.

Tilray was also one of the first licensed producers in Canada's adult-use market to launch cannabis 2.0 products, which include vapes and edibles. It launched a joint venture named the Fluent Beverage Company with Anheuser-Busch InBev featuring CBD-infused beverages.

We have seen Canadian marijuana companies affected by a number of structural challenges. This has resulted in precarious cash positions for Tilray and its peers.

Tilray's cash position has fallen drastically -- from $517.6 million in 2018 to $97 million at the end of 2019 -- because of widening losses and acquisitions. Although it signed a $60 million two-year credit facility in 2020, this seems insufficient given the company's high burn rate.

As we have also seen, this month GLJ Research analyst Gordon Johnson has reduced Tilray's price target to $0, driven by the company's asset writedowns, inventory valuation adjustments, and a sequential fall in Q4 sales.

Tilray has invested in key markets to secure raw material supply and leveraged its market position to take advantage of the global shift toward cannabis legalization. Tilray will also stand to benefit from the expanding cannabis 2.0 market, as well as the opening up of new retail stores in Ontario.

However, the company's lack of profitability and low cash balance remains a major concern. This means Tilray stock will remain volatile until it can significantly improve profit margins.

The cannabis industry is still in a nascent stage. It can be compared to the dot-com bubble of the 2000s, which attracted several players with multibillion-dollar valuations. That period saw several companies go bust, and the same can be expected in the high-growth cannabis segment.