There are now more than 1 billion devices running Windows 10, a milestone made possible thanks to the end of support for Windows 7.

Five years after announcing a goal to have more than 1 billion devices running on Windows 10, Microsoft (MSFT 0.71%) has reached that milestone.

The achievement, which comes a few weeks after support for Windows 7 ended, includes PCs, laptops, Xbox One gaming consoles, and HoloLens mixed reality glasses that run on its latest operating system. 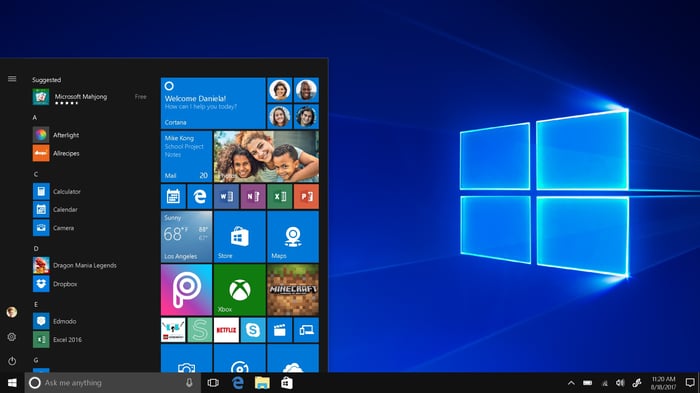 In a blog post, Yusuf Mehdi, corporate vice president, modern life, search & devices at Microsoft, said that, as of Monday, more than one billion people are using Windows 10 across 200 countries. That amounts to about one in every seven people across the globe.

"With 100% of the Fortune 500 now using Windows 10 devices, it has become a critical platform for driving business transformation in the enterprise and beyond," wrote Mehdi. The executive also revealed Microsoft's Windows Insider program in which people are invited to test out beta versions of Windows has more than 17.8 million members.

When Microsoft first rolled out Windows 10 in 2015, it planned to have one billion devices running Windows 10 by 2018. But that was pushed out until 2020 in part because its smartphone business failed to take off. Slow upgrades to Windows 10 as companies and consumers held on to Windows 7 also hurt the adoption rates. But with support for Windows 7 over since January, customers have little choice but to upgrade.

When Microsoft reported fiscal second-quarter earnings it said Windows OEM revenue was up 18% year-over-year. The end of Windows 7 support it also behind the 4.8% growth for the PC market in the fourth quarter of 2019.

The Windows 10 milestone comes as Microsoft is taking its operating system to the next level, creating a version that will support dual-screen devices.