Please ensure Javascript is enabled for purposes of website accessibility
Log In Help Join The Motley Fool
Free Article Join Over 1 Million Premium Members And Get More In-Depth Stock Guidance and Research
By Billy Duberstein - Mar 16, 2020 at 7:45AM

Naspers is in terrific internet-related businesses, and just raised cash at a recent high in January. Now it’s buying back stock on the cheap.

In the current market downdraft, investors may be thinking about what kinds of businesses will benefit from the stay-at-home economy. Those could be companies to put on your watch list right now as the market tries to find its footing.

One interesting candidate is Chinese tech giant Tencent (TCEHY -2.89%). It's known for its vast online video game empire and WeChat, the Chinese social media "super app" that allows its customers to do just about every task in Chinese daily life, from socializing, to playing videos, to paying bills. In addition, Tencent also owns one of the largest streaming video services in China, and its Tencent Pay is one of two dominant payments companies in a vast duopoly with Alibaba. Tencent is also growing its cloud computing division, where it also lags behind Alibaba but is gaining fast.

However, the stock that's looking pretty smart right now isn't Tencent, but rather another company that owns 31% of Tencent: Naspers (NPSNY 3.96%). 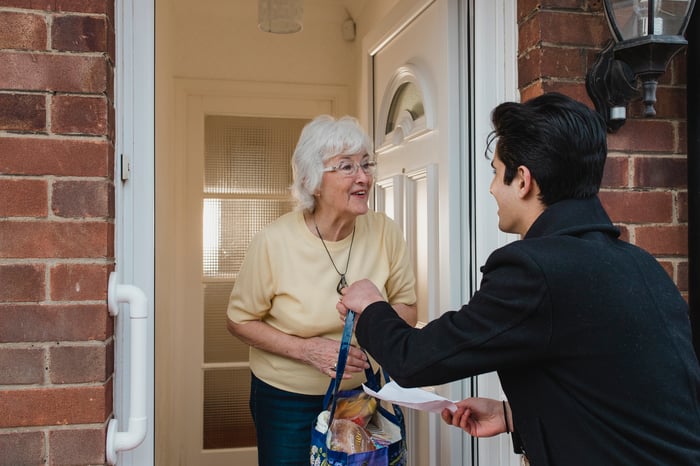 Naspers has made a big bet on food delivery and other internet commerce. Image source: Getty Images.

Naspers has an impressive stay-at-home portfolio

Naspers is a South African media company that, over the past 30 years, has transformed itself into a major international venture-capital type firm. It made perhaps the greatest bet in venture history with a $32 million wager on Tencent back in 2001, a stake now worth some $153 billion.

But due to some of the limitations of being on the Johannesburg stock exchange, Naspers began trading at a discount to the value of its Tencent stake alone, despite owning tens of billions of dollars in other businesses as well. Thus, last summer, it spun off its huge investment in Tencent (along with its other international tech investments) into a separate company called Prosus (PROSY 2.45%). Prosus holds not only Naspers' massive stake in Tencent, but also stakes in a vast array of internet-based companies in emerging markets. Naspers retained a 74% stake in Prosus, and spun off the rest of Prosus to public shareholders.

Naspers' and Prosus' second-biggest bet is in food delivery -- another bet that, despite being an industry known for tough profitability, is looking awfully smart right now. Not only will consumers use more food delivery in the current environment, but the habit of ordering more food for delivery could also gain even more traction in the future as a result. Naspers owns stakes in India's Swiggy, Latin America's iFood, and Germany's Delivery Hero (DLVHF 11.60%). And that's not to mention Tencent's stake in Meituan-Dianping (MPNGF 2.77%), which had a blowout year in 2019, dominating the Chinese food delivery market.

Despite the spinoff last summer, not only did Prosus continue to trade at a discount to just the value of its stake in Tencent, but Naspers even continued to trade at a discount to the value of its stake in Prosus. In that light, Naspers management took action in January that is now looking like a masterstroke of market timing. On Jan. 21, just after coronavirus headlines were coming out of China, Naspers was able to sell 22 million shares (or 1.4% of Prosus) to other investors. That 1.4% may not sound like much, but the sale yielded Naspers about 1.5 billion euros ($1.66 billion). Naspers said that the proceeds would go toward a large repurchase of its shares.

Of course, shares of both companies were trading at higher prices then. 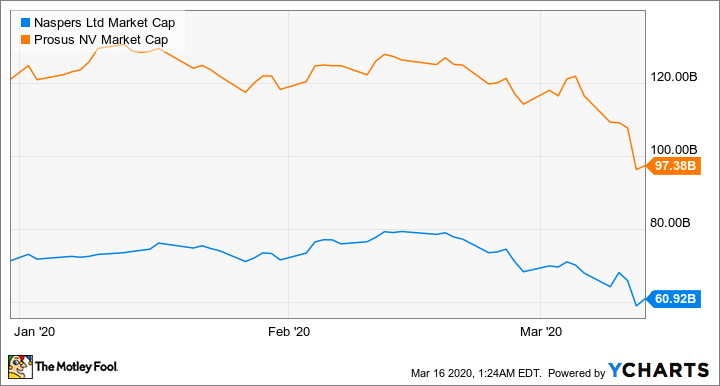 Now that Naspers has the excess $1.7 billion in cash, it could retire 2.8% of its own shares. When compared with a sale of just 1.4% of its stake in Prosus, that's basically a doubling of Naspers' intrinsic value by selling Prosus high, and buying the discounted Naspers shares low.

The sale and repurchase does something else, too

In addition to the value-accretive buyback, by selling its shares in Prosus and buying back its own stock, Naspers is shrinking the asset value of its company -- though by retiring an even greater percentage of its shares, it's a plus for shareholder value. The main reason that Naspers continues to trade at a discount to its asset value is that it's still quite large for the Johannesburg market, despite its recent financial engineering.

But should Naspers be able to continue to sell assets at high prices and buy back discounted shares, the shrinking of the company may give it more "room" to grow on the Johannesburg stock exchange. Yet on a per-share basis, shareholders would still benefit by having even more shares retired.

This all may take quarters or years to play out, and Naspers still owns a hefty 72.5% of Prosus. Naspers management has proved quite adept at financially engineering the closing of the valuation gap thus far. The continued closing of the gap between its asset value and its stock price is one of the more interesting stories to follow in the technology sector today, along with the huge volatility in the market, of course.