With stabilizing sales and a new team of executives, now might be the time for Gap’s long-awaited recovery.

When you hit rock bottom, the only way to go is up. Except you don't always know when you've hit that level and, in retail, you can also go bankrupt.

Gap (GPS -6.04%) has been struggling for a few years, but even its Old Navy brand, which has been carrying the company, saw decreasing comps for the first time in the 2019 third-quarter report released back in November. That meant decreasing comps in every brand (activewear brand Athleta's comps weren't disclosed) and brought Gap into crisis mode. Longtime CEO Art Peck's departure at that time just added to the overall worries.

However, fourth-quarter results released last week were better than the third quarter and no worse year over year. Prior to the release, interim CEO Bob Fisher announced Sonia Syngal, CEO of Old Navy, as the new company leader along with a slew of new executives. It's hoped that the non-disastrous report and new leadership are the opening paragraphs in the next chapter in the company's story. 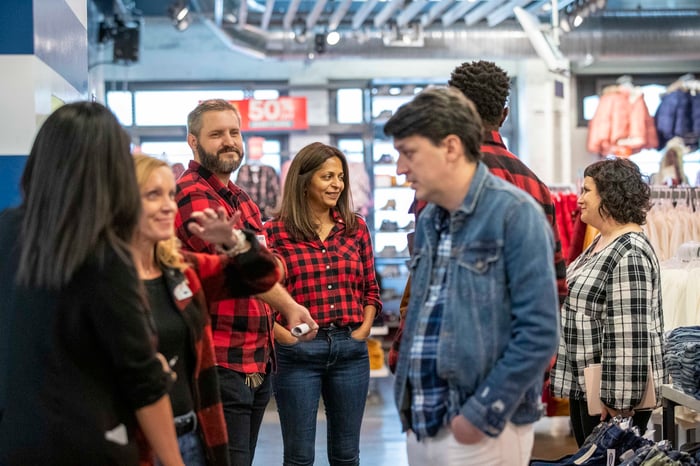 Gap's fourth quarter, which included the holiday season, was definitely better than its third quarter and close to flat year over year. Let's take a look.

Some other fourth-quarter perks were total sales up 1% after decreasing 2% in the third quarter, a 5% increase in total sales at Old Navy, and increases in gross margin and gross profit.

Old Navy showed strength in its women's segment with a positive comp for the first time since the third quarter of 2018, driven by activewear and fleece. Some of the areas in progress for Old Navy that were mentioned on the company's fourth-quarter conference call include:

These objectives are meant to unlock customer value in three distinct ways: segmentation, personalization, and loyalty. This is a solid position from which to execute, and bringing aboard a new management team is a refreshing take on revitalizing operations. The main question that remains is what to do about the Gap brand.

All sorts of reasons have been tossed around for why Gap has been bleeding sales, including the retail apocalypse, being out of touch with customer needs, and having a weak e-commerce program. Incoming CEO Syngal will have her hands full ramping up strategies in all areas of the business to address whichever reason is the real one.

Challenges in the move forward

Fisher admitted that Gap failed in its previous aim to expand margins through improved efficiencies and tighter inventory. The company faced challenges with marketing, including ambiguous brand position, poorly executed marketing messages, and an inconsistent product point of view. The problem is, Gap still doesn't have a lot of clarity on these issues. Syngal said the company knows how to build a brand ... but it has to figure out first what that brand is going to be.

Another challenge is that while Old Navy is the fourth-largest e-commerce apparel retailer in the U.S., Gap's digital options are sub-optimized, as it's not taking advantage of its very strong physical presence to better take advantage of the omnichannel system. Given the success of Old Navy, Syngal certainly has the right skill set to enhance the Gap brand's chances in this area.

While the company is dealing with these foundational matters, novel coronavirus threats loom overhead as well. In that sense, Gap may be better prepared than other apparel retailers, with a hefty cash box of $1.7 billion and strong supplier relationships. Those might carry it through as it embarks on the consumer discretionary company's new journey.