Investors are pricing in a recession.

Shares of Camping World Holdings (CWH -1.92%) traded down 33% on Wednesday despite no company-specific news. Investors are increasingly pricing in a recession, and it is hard to imagine a substantial uptick in RV sales in the middle of a downturn.

Camping World shares have struggled since the company's 2016 IPO, hit hard by an industrywide slowdown in RV sales made worse by an ill-fated decision to buy the Gander Outdoors brand. The shares are now down more than 80% from the IPO price. 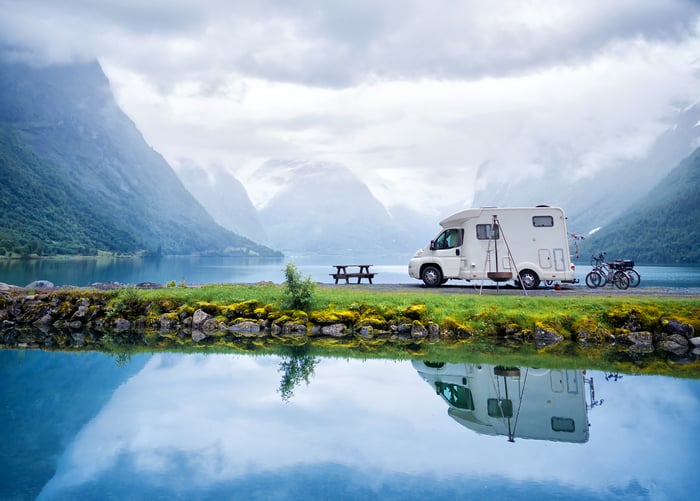 The issue appears to be fears of a recession, as Camping World's best day in recent weeks occurred last Friday after the University of Michigan Consumer Sentiment Index came in better than expected and the White House and Congress seemed to have found common ground on an economic stimulus package.

Days later, that stimulus package is yet to be done, and the headlines out of Washington make it sound like it could take a few more days for any deal to be solidified. That uncertainty is causing markets to crater on Wednesday, and is sending shares of Camping World down toward a new all-time low.

NEW: The Senate won't be able to complete action on the $1 trillion-plus #coronavirus stimulus package before next week and will work through the weekend to try to hammer out a deal with Democrats, two Senate GOP leaders tell CNN.

Camping World came into this crisis in the early stages of a turnaround and with nearly $3 billion in total debt on its balance sheet. What happens from here is anyone's guess, but it seems unlikely the COVID-19 coronavirus will be quickly contained or that the economy will return to business as usual any time soon.

Given the level of uncertainty, and Camping World's difficult road ahead, it is understandable investors are selling out and moving to the sidelines.