Please ensure Javascript is enabled for purposes of website accessibility
Log In Help Join The Motley Fool
Free Article Join Over 1 Million Premium Members And Get More In-Depth Stock Guidance and Research
By Lee Samaha - Mar 19, 2020 at 11:35AM

The IATA continues to downgrade expectation for airline revenue as a consequence of COVID-19.

The wild gyrations in aerospace related stocks must have left many investors puzzled by events, but a quick look at how the International Air Transport Association (IATA) has been adjusting its economic model goes a long way to explaining why. Simply put, the COVID-19 outbreak has worsened so dramatically in such a short space of time that it's becoming very difficult to get a handle on what to expect from companies like Boeing (BA -1.25%) and aerospace suppliers like General Electric (GE -0.03%). 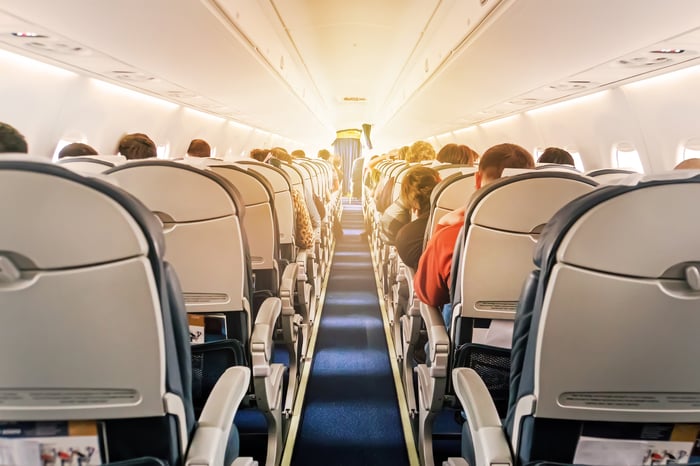 Going back to December, the IATA was forecasting a relatively rosy scenario, with airline revenue passenger kilometers (RPK) set to rise by 4.1% in 2020, leading to a rise in spending on air transport to $908 billion from $873 billion in 2019.

As no one needs reminding, the COVID-19 outbreak has grown since then, but come Feb. 20 there were still hopes that the impact on the aerospace industry would be limited to Asia. Indeed, the IATA gave an initial assessment of the impact and modeled a scenario where RPK would decline 0.6% in 2020 with a $29.3 billion impact on passenger revenue -- with $28 billion of it attributed to Asian airlines.

Fast forward to the latest update, given on March 17. The IATA's latest update declared that the "situation had moved beyond" it's so called "extensive spread" scenario.

What to make of it?

In a nutshell, it's a highly dynamic situation, and if airlines and industry analysts are monitoring the situation on an almost-daily bass then investors should do too. Unfortunately, until the outbreak shows some definitive signs of being contained on a global basis, there's likely to be further pressure on the aerospace industry -- not good news for Boeing and General Electric.