Please ensure Javascript is enabled for purposes of website accessibility
Log In Help Join The Motley Fool
Free Article Join Over 1 Million Premium Members And Get More In-Depth Stock Guidance and Research
By Dan Caplinger - Mar 19, 2020 at 9:35AM

The Pandemic Emergency Purchase Program is intended to prevent a new financial crisis.

It's been an extraordinary week for financial markets. New fears about the economic impacts of the coronavirus outbreak have prompted stock markets around the world to slide precipitously, and many major multinational corporations and small businesses alike face difficult threats to their ability to operate. The situation has been particularly bad in Europe, where the COVID-19 pandemic has hit Italy especially hard and health officials have seen cases across the continent. Banks like Deutsche Bank (DB -3.55%) and Credit Suisse (CS -0.35%) have seen their shares plunge along with those of their U.S. counterparts.

To fight against economic pressure, the European Central Bank announced late yesterday that it would make a dramatic move to provide much-needed funds for businesses in countries in the European Union. The Pandemic Emergency Purchase Program (PEPP) has three main parts that the central bank hopes will shore up the condition of the financial system on the continent. 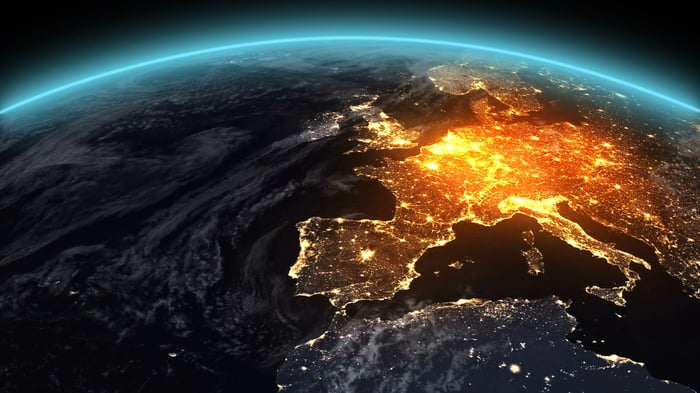 The biggest move that the ECB made was to provide 750 billion euros, worth more than $820 billion at current exchange rates, to make purchases of debt. The central bank has had asset purchase programs in place for a while now, with the intent of providing further economic stimulus even with interest rates set at or below 0%. The purchases will last at least between now and the end of the year, with the option of extending into 2021 if the crisis phase of the COVID-19 pandemic hasn't yet ended by then.

The program will allow the purchase of public sector bonds, corporate debt, and asset-backed securities under the same standards the ECB has used under previous programs. The central bank will retain the flexibility to make purchases over time and in different nations and asset classes to provide support where it's most needed.

The ECB also expanded the assets that it's allowed to purchase under both the PEPP and the existing corporate sector purchase program. Prior to the move, the central bank accepted short-term commercial paper obligations only from financial institutions. The change makes all commercial paper eligible for repurchase regardless of the issuer, as long as the credit quality of the issuer is high enough for it to qualify for the program.

3. Easing of collateral standards to include corporate bank loans

Europe's central bank also chose to broaden the ability of those looking to use its programs for refinancing operations by relaxing its standards on what it accepts for collateral. Established bonds that trade on recognized exchanges have typically been the best collateral, with nonmarketable debt considered less desirable. However, the latest ECB move would expand the definition of acceptable collateral to include loans that banks like Deutsche Bank and Credit Suisse make to corporate sector borrowers. The central bank hopes this will ensure that counterparty risk doesn't preclude participants from taking part in its refinancing programs.

Many European investors wanted swifter action from the ECB, and despite the size of the new operation, the perception in the financial markets was mixed. European stocks initially rose but lost ground during Thursday's trading session as market participants again indicated that monetary policy isn't enough to ease their minds about the crisis.

Central banks have thus far asserted that the COVID-19 pandemic doesn't pose a systemic risk along the lines of what they saw during the financial crisis in 2008 and 2009. Recent action in the bond markets, however, suggests that investors aren't so certain. As economies around the world start to move toward a deep recession, the ECB and its peers across the globe will likely have to keep fighting negative sentiment in order to keep the financial system working as efficiently as possible.