A push to increase the availability of ventilators by repurposing existing manufacturing capacity could reduce demand for ResMed.

After manufacturing companies disclosed that discussions are underway to repurpose idled manufacturing capacity to produce ventilators, ResMed Inc. (RMD -1.54%) shares lost 10.3% of their value on Thursday. 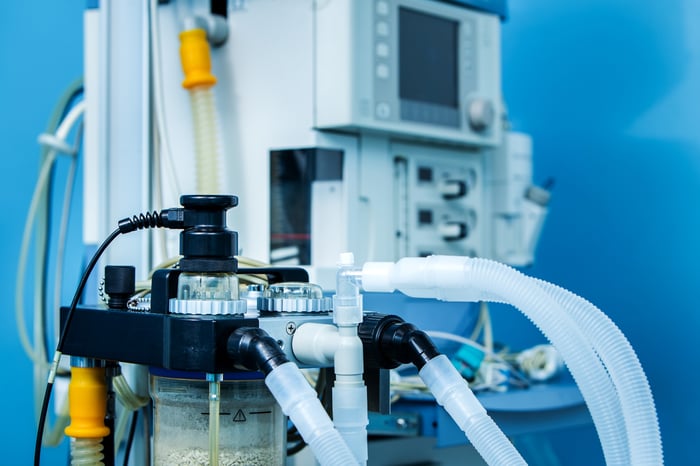 Demand for ventilators to provide oxygen therapy is increasing because COVID-19 can cause life-threatening respiratory illness. So far, 236,420 COVID-19 cases have been diagnosed worldwide, including 11,274 cases in the United States. According to the Centers for Disease Control and Prevention (CDC), over 20% of the 2,449 cases identified in the U.S. between February 12 through March 16, 2020 required hospitalization.

Oxygen therapy is a primary intervention for severely ill patients, so worries that ventilator demand could outstrip existing supply is growing. In response, companies including Ford (F -3.38%) and General Motors (GM -5.05%) have announced they're evaluating their ability to shift manufacturing capacity to the production of ventilators. On Wednesday, both automakers reported they're halting auto production at their North American plants to protect workers.

If capacity doesn't increase, then healthcare providers could be forced to ration the use of existing ventilators, potentially jeopardizing lives. Although more competition poses a headwind to sales, orders for ResMed's non-invasive ventilators should still increase, and its CPAP business shouldn't be affected. If that's the case, then this could be an opportunity to buy shares.