Please ensure Javascript is enabled for purposes of website accessibility
Log In Help Join The Motley Fool
Free Article Join Over 1 Million Premium Members And Get More In-Depth Stock Guidance and Research
By Will Healy - Mar 20, 2020 at 8:45AM

The market sell-off from the coronavirus pandemic has made these stocks high-dividend payers.

Dividend stocks provide many people with a viable option for retirement income. The S&P 500 average dividend stands at approximately 2.4%, exceeding what most bank-related instruments yield in a savings account. Moreover, the return on many dividend stocks dramatically exceeds the S&P 500's average price appreciation. Several dividend-paying companies have increased their payout annually for years, or in some cases, decades.

Furthermore, the sell-off driven by the COVID-19 pandemic has significantly raised dividend yields. The S&P 500 has fallen by nearly 30% from its recent high. Consequently, the average return on dividends, which stood at an estimated 1.78% in February, has risen by almost 35% in less than one month. Those with the courage to buy into a volatile market could earn significant, long-term returns on the payout alone.

Some of these stocks are in a position to benefit from the growing number of baby boomers entering retirement.  This is a large population that could drive revenue growth for certain dividend stocks. To earn some of this dividend income, retirees should consider buying these three stocks.

AbbVie (ABBV 0.83%) finds itself in a transition phase. Since it split from Abbott Laboratories in 2013, Its injectable biologic drug Humira has driven much of its revenue. Investors sold off the stock as Humira patents began to expire across the world. AbbVie traded as high as $125.86 per share in 2018. Thanks in large part to Humira-related selling, it has fallen below the $75 per share range.

However, AbbVie did not rest on its laurels with Humira. Even though Humira's sales have begun to fall, the company has seen a massive surge in growth from its hematologic oncology, or blood cancer, drugs. For 2019, sales of Imbruvica rose by 30.2%. Venclexta saw an increase in revenue for the same period exceeding 100%. 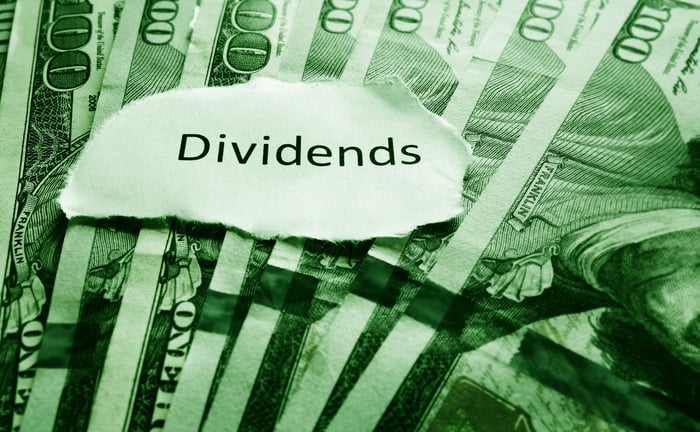 The sales increases should not end there. Evaluate Pharma ranked Upadacitinib, a rheumatoid arthritis treatment, the second most valuable research and development project. Upadacitinib already received Food and Drug Administration approval for rheumatoid arthritis in the U.S. Evaluate Pharma estimates that drug can generate more than $2.5 billion in annual sales by 2024. The rising number of enrollees in the Medicare Part D Drug coverage should help to boost these sales.

Thanks to the recent market decline, AbbVie's stock trades for just over 8.6 times forward earnings. However, analysts forecast earnings to increase by 8.2% this year and 8.7% in fiscal 2021.

The new bear market has left the company with a dividend yield of more than 6.6%. Moreover, thanks to its previous history as part of Abbott, its $4.72 annual payout has been raised for 47 consecutive years. Profit increases appear set to continue, and the payout ratio indicates that AbbVie pays out around 48.8% of profits in the form of dividends meaning the annual payout hikes should continue for the foreseeable future.

The dividend income could also help to fund the retirement of baby boomers. Since it offers a higher-than-average return that rises annually, it could serve as a viable income stream in retirement.

The massive decline in marijuana stocks may make Innovative Industrial Properties (IIPR -1.07%) seem like a strange choice. The fact that the Horizons Life Sciences Index has fallen by about 80% from its 52-week high describes the extent to which marijuana stocks have dropped. As a real estate investment trust (REIT) known as a "marijuana REIT," it may look like a stock to avoid considering the performance of cannabis stocks recently.

However, Grandview Research forecasted a compound annual growth rate (CAGR) for the cannabis industry of 18.7% until 2027. Moreover, with hemp, a form of marijuana, becoming legal in the U.S. in 2018, farmers in all 50 states can grow at least some type of cannabis legally. Further, since the company merely owns and leases property, it does not face the federal schedule 1 drug restrictions hampering most marijuana stocks.

The freedom from schedule 1 restrictions provides a competitive advantage for Innovative Industrial, which owns 35 properties in 15 U.S. states. Its recent growth has been fueled by buying the property of financially troubled marijuana companies and leasing it back to them. This provides the company with assets while giving Innovative Industrial Properties a source of cash flow. Early this year, the company bought and leased back a property in Yellow Springs, Ohio, to Cresco Labs.

This strategy has helped to boost the top and bottom lines as analysts predict profits for Innovative Industrial Properties will increase by 108.4% this year and 24.1% the next. The recent stock sell-off means investors can buy the stock for less than half of what it sold for in July, a move that brought its forward P/E ratio to about 11. This has taken its $4 per share payout to a yield of around 8.6%.

Moreover, considering the 90% minimum payout required of REITs, the payout ratio of about 93.6% is nothing unusual. Much like AbbVie's payout, this dividend offers a possible income stream for retirees. Innovative Industrial may benefit indirectly if more seniors choose to use medical cannabis products. As the marijuana industry continues its expansion, Innovative Industrial Properties and its dividend should grow along with it.

With an estimated 10,000 Americans turning 65 every day, this means a similar number of people are aging into the Medicare system daily. Such a statistic plays into the hands of another REIT stock: Omega Healthcare Investors (OHI 0.75%). An aging population increases the demand for healthcare services, and, by extension, demand for healthcare-related properties. Omega owns 964 skilled nursing and assisted living facilities across 40 U.S. states and the U.K.

Thanks to the current market sell-off, the company has lost more than two-thirds of its value since February. This swoon took its current P/E ratio to about 9.4. Though analysts only forecast 5.8% profit growth for this fiscal year, they expect earnings increases to average 15.8% per year for the next five years.

Not only does Omega Healthcare offer a dividend yield of about 18%, but it has also increased the payout for 10 consecutive years. Understandably, the payout ratio of over 159% might concern some investors. However, this does not mean that 159% of the company's net income is going to dividends. REITs derive the cash to pay their dividends through funds from operations (FFO). Investors have to remember that net income includes deductions. Hence, these companies may bring in significantly more cash than their net income might indicate.

In the case of Omega Healthcare, it earned $0.78 per share of FFO income in the previous quarter. This left the company easily able to cover the $0.67 per share it paid in quarterly dividends. Hence, even with only $0.268 per share of quarterly net income, the REIT can pay a dividend far exceeding that amount. Admittedly, a dividend yield at current levels makes it unclear whether the company will maintain the annual streak of payout hikes. Still, with an increasing customer base and the cash to maintain the payout, Omega Healthcare will likely remain a lucrative dividend investment.