Please ensure Javascript is enabled for purposes of website accessibility
Log In Help Join The Motley Fool
Free Article Join Over 1 Million Premium Members And Get More In-Depth Stock Guidance and Research
By Demitri Kalogeropoulos - Mar 20, 2020 at 9:20AM

The food giant's management team noted a double-digit sales jump in early March that likely surged from there.

General Mills (GIS 0.62%) recently announced several pieces of good news for investors. The consumer foods giant managed to meet its growth targets for the fiscal third quarter, and its short-term outlook was even brighter thanks to surging demand for packaged foods as shoppers dramatically scale back their spending at restaurants in the era of social distancing.

In a conference call with Wall Street analysts, CEO Jeffrey Harmening and his team explained how they are coping with the extra stress on the supply chain while detailing their optimistic outlook for the full fiscal year. Below are a few highlights from that chat. 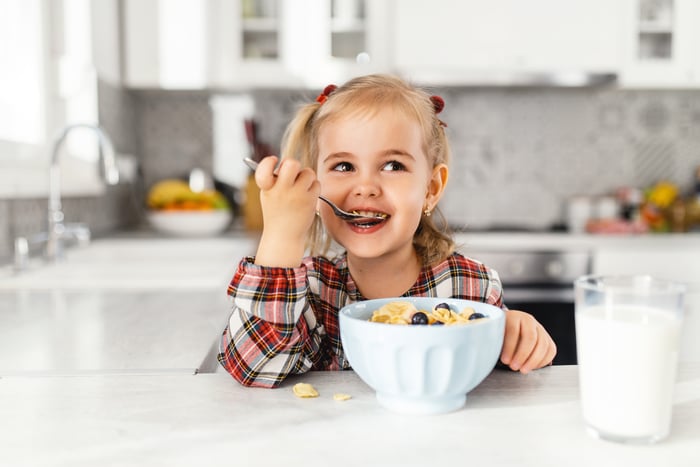 We drove sequential net sales improvement in [snacks and yogurt] in the third quarter, while our cereal results stepped back versus the first-half growth rate.
-- Harmening

General Mills' third-quarter growth trends were roughly the same as investors have seen for over a year. Organic sales inched down in the core U.S. segment due to weak but steady demand in categories like yogurt and cereal. Globally, sales were flat, in part due to a temporary headwind caused by the COVID-19 virus' spread in China.

Customer traffic in that country dived by over 90% at General Mills' ice cream stores in February, a period that coincided with China's most aggressive social distancing. Executives said shopper trends have improved since that time, but that they remain significantly depressed in March, with traffic at Haagen-Dazs ice cream shops still down roughly 60% in recent days.

Our supply chain is operating effectively around the world, and we've been able to service the vast majority of customer demand to date. Our outlook assumes we continue to operate our supply chain with minimal disruption, but this could change if the virus situation worsens materially.
-- Harmening

General Mills has noted a big increase in demand from its retailing partners in supermarkets and convenience stores around the world as shoppers stock up on food and pantry items. That boost has stressed parts of the business but isn't threatening shortages.

Instead, management believes it can satisfy elevated sales volumes in key markets like the U.S., Europe, and Australia at least through early fiscal 2021, when executives think the demand spike might start unwinding.

Our U.S. retail sales results for the week ended March 7 were up low double digits, including pet care, and we anticipate [consumer] takeaway for the week ending March 14 will be many times higher across all channels.
-- Harmening

The major demand boost was obvious in early March, when social-distancing guidelines began promoting more eat-at-home time in the United States. Since then, General Mills has seen sales soar for products across its snack food and breakfast niches. As a result, management is confident that organic sales will rise in fiscal 2020 despite the China sales pressure.

Executives were careful to note that "a great deal of uncertainty" is built into that outlook, which currently assumes only a modest supply chain disruption in the coming weeks before demand starts reverting to normal spending patterns in mid-fiscal 2021.

In the meantime, General Mills is reasonably confident that it will meet the key sales and profitability growth goals that the company outlined over a year ago, even through an unprecedented shift in consumer spending habits.