The stock market remained jittery on Friday morning, although the swings in major market benchmarks were less severe than investors have seen in the past few weeks. Market participants are waiting to see how lawmakers will act to try to lessen the impact of the COVID-19 outbreak on people's finances, but the pressure that the pandemic has put on businesses and households is posing threats to various parts of financial system. As of 11:30 a.m. EDT, the Dow Jones Industrial Average (^DJI 0.00%) was down 69 points to 20,018. The S&P 500 (^GSPC 0.16%) had dropped 19 points to 2,390, although the Nasdaq Composite (^IXIC 0.00%) was up 34 points to 7,184.

Amid all the declines in the market recently, tech companies with solid bases of subscribers have held up extremely well. CrowdStrike Holdings (CRWD 4.33%) is the latest example of that, posting encouraging earnings that suggested it would be able to make it through the coronavirus storm. Similarly, Slack Technologies (WORK) has turned the social distancing we've seen across the globe into a business opportunity, drawing in more customers for its services.

Shares of CrowdStrike Holdings rose 17% Friday morning. The cybersecurity expert released fourth-quarter financial results late Thursday afternoon that confirmed its past growth trajectory, and its projections for the future were more encouraging than many had feared. 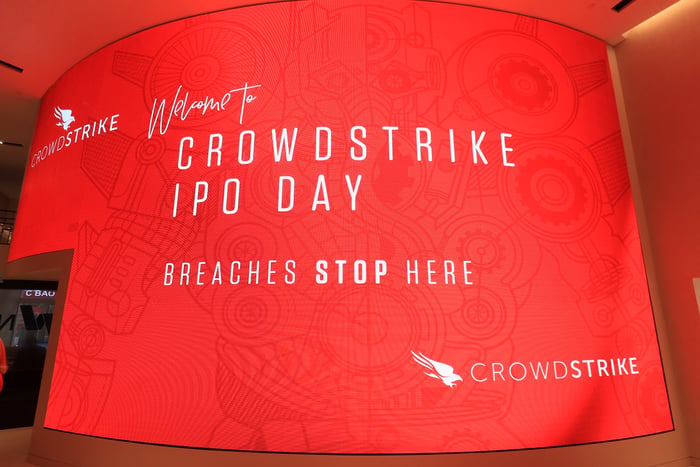 CrowdStrike achieved some key milestones. Annual recurring revenue hit the $600 million mark, jumping more than 90% from year-ago levels. The company still lost money, but adjusted net losses were 86% smaller than they had been in the year-earlier period. CrowdStrike's free cash flow turned solidly positive as well. From a fundamental perspective, CrowdStrike is seeing huge demand. The company added 870 new subscribers to bring its client count to 5,431, more than doubling year over year.

There's also a lot of optimism for CrowdStrike about the coming year. The software-as-a-service company still expects to see adjusted net losses, but they should continue to shrink from recent levels, and it sees revenue rising more than 50%.

CrowdStrike's products are instrumental in helping companies protect themselves from cyberthreats, and enterprise customers need those services just as much regardless of what's happening with the COVID-19 pandemic. Investors got some reassurance that CrowdStrike's long-term prospects still look sound, and that's prompting a nice rise in the stock.

No slack in Slack's demand

Elsewhere, shares of Slack Technologies were up 5%. The provider of workplace-collaboration software has gotten a lot of interest over the past year, but now, the rush of people trying to work from home has drawn even more people into its ecosystem.

Slack disclosed in a regulatory filing with the Securities and Exchange Commission earlier this week that it had added 7,000 new paid customers between the beginning of February and mid-March. That compares with roughly 5,000 new paid customers per quarter during the last half of the fiscal year that ended on Jan. 31, showing the acceleration in interest that Slack has seen.

The news comes as a welcome reversal from concerns that arose after Slack announced its fourth-quarter financial results last week. Some investors haven't been satisfied with the growth rates that the company has posted, with worries that competing products from Microsoft and others might end up drawing business away.

Slack is still losing money, so it'll take some persuasion for shareholders to have confidence that the company is on the right track. Nevertheless, today's move higher shows that investors like what they're seeing from customers jumping aboard Slack's platform during tough times.