Please ensure Javascript is enabled for purposes of website accessibility
Log In Help Join The Motley Fool
Free Article Join Over 1 Million Premium Members And Get More In-Depth Stock Guidance and Research
By Andrew Tseng - Mar 21, 2020 at 11:34AM

The key is offering a great customer value proposition to housebound people.

Very few companies are getting stronger as a result of the coronavirus pandemic, but Amazon (AMZN 1.42%), Netflix (NFLX -0.69%), and Chewy (CHWY 0.28%) are. These companies are only becoming more relevant in our lives as we are increasingly spending our money at home and online. Furthermore, each of these businesses provides its customers with an incredibly good value proposition, which becomes even more important during recessionary conditions.

Amazon doesn't need much of an introduction. It's the world's largest online retailer as well as the global leader in the public cloud computing business. Lately, it's been seeing overwhelming demand as a result of the coronavirus pandemic because more people are housebound and looking to shop online rather than go out to physical retail stores.

In fact, it just announced on Monday that it will be hiring 100,000 more workers in its fulfillment centers and delivery network to meet the extra demand it's seeing. Anytime a company is hiring that aggressively, it means its sales growth is probably going to accelerate. In fact, the last time Amazon said it was hiring 100,000 extra workers was in the run-up to the 2018 holiday season. In other words, Amazon seems to be seeing Christmas-level demand, at least for certain household needs, at the moment. 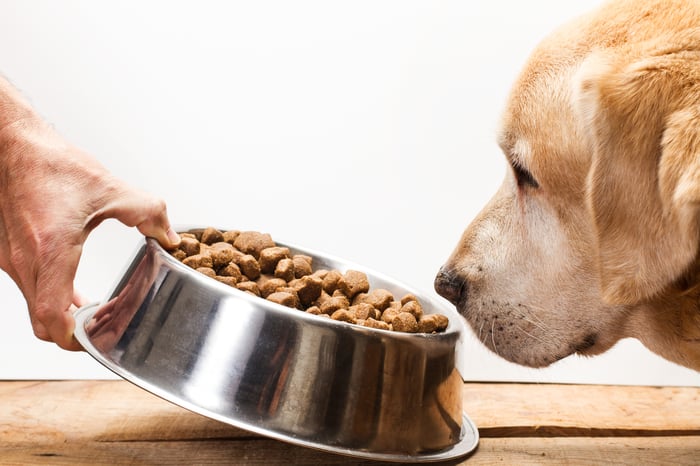 Part of that overwhelming demand is for free Whole Foods grocery delivery that is offered for Prime members. The Whole Foods section of Amazon's site has been warning customers of delivery delays and out-of-stock items. The extra hiring is certainly going to be used at least in part to increase capacity for Whole Foods grocery delivery. That will probably increase the number of customers that turn into repeat shoppers, benefiting the business over the long term as well as the short term.

Netflix is another of the clear winners of the coronavirus pandemic. The more time people are spending at home, the more likely they are to sign up for or maintain a Netflix subscription.

Normally, the average subscriber watches about two hours of video via Netflix per day. It's a good bet that's increasing given that so many people are home, including children not in school. That's key, because in any subscription business that offers unlimited consumption, higher engagement means higher subscriber retention. In other words, the more people use it, the more likely they are to keep it. That should drive churn, or subscriber cancellations, down during a time when new subscriptions should be increasing as well.

While significant job losses are happening, Netflix is a low-ticket item at only $12.99 per month. More importantly, it's an incredible value proposition given the seemingly infinite amount of content on the service and the new content constantly being added. Consumers who need to cut their spending are far more likely to cancel their expensive cable bill than Netflix.

Chewy is talked about less often than Amazon and Netflix, but it is benefiting from this environment just as much. Chewy is the leading online retailer of pet food and supplies in the U.S. Of the entire estimated $56 billion U.S. pet food supplies market, including live animals and OTC medicine, the online component is only about 15% to 20%. But that should be increasing even more in a time when most people are housebound and preferring to minimize trips to retail stores.

For pet owners, dog food, cat food, and cat litter are not discretionary expenses. Demand is consistent and repeatable, because pet owners are not going to let their pets go hungry. Further, more than 70% of Chewy's sales are to customers who have autoship programs. While that doesn't mean more than 70% of sales are on autoship, it does suggest that the majority of Chewy's sales are on autoship. That makes these dependably recurring purchases even more assured.

The food, drug, and mass-market retail channel, which includes grocery and drug stores and big-box retailers, still has almost 50% market share of the category. But today, Chewy has a golden opportunity to steal market share away from that channel as more people are remaining housebound. The best part is that once customers try Chewy, a portion of them will turn into repeat customers after they begin to appreciate Chewy's advantages in product selection, price, and outstanding customer service. As a result, investors should appreciate that Chewy, like Amazon and Netflix, should thrive during this downturn and emerge stronger on the other side.