Please ensure Javascript is enabled for purposes of website accessibility
Log In Help Join The Motley Fool
Free Article Join Over 1 Million Premium Members And Get More In-Depth Stock Guidance and Research
By Lee Samaha - Mar 23, 2020 at 10:04AM

A food company and a beverage can manufacturer could be set to perform relatively better in the current environment.

There's no way to sugarcoat matters. It's looking increasingly likely that the novel coronavirus outbreak is going to have a significant impact on company earnings in 2020.

Initially, the hope was that the impact would be limited to the Asia Pacific region and the first quarter, but the internationalization of the outbreak and its widening scope mean the economy at large is threatened. That said, there are still some individual stocks that might actually do well in this environment, and I think Hormel Foods (HRL 0.94%) and Ball Corp (BLL -1.03%) are well worth a look. Here's why. 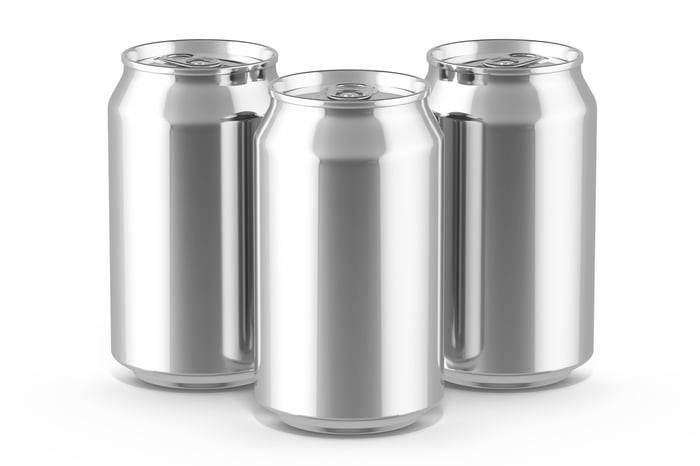 The case for buying the stock in the face of the novel coronavirus crisis is simple and at the same time nuanced. For example, it's hard to see why a food company -- an industry usually regarded as the most stable of consumer staples -- might be attractive in such a scenario. However, there's also the argument that a near-term shift in consumer behavior caused by the coronavirus outbreak -- from dining out to buying groceries -- could crystallize into a longer-term adjustment. That would probably be a net positive for Hormel -- only 31% of its sales go to the U.S. foodservice market, with 62% to U.S. retail and deli stores.

Although the company may not be well known, its food brands, such as Spam, Skippy peanut butter, and a range of meat products are widely distributed across the U.S. Given that Hormel only generates around 17% of sales from non-meat products, the company is essentially a play on the growing demand for protein-based food. Slightly more than half its sales come from pork-related products, with around 20% from turkey-related products.

Risk-averse investors will be pleased to hear that Hormel is a conservatively run company, and also a dividend aristocrat which has increased its dividend for the last 54 consecutive years. As you can see below, it could pay off all of its net long-term debt with just one year's free cash flow, and a payout ratio (dividends divided by earnings) of 46% suggests it can grow its dividend in the future. 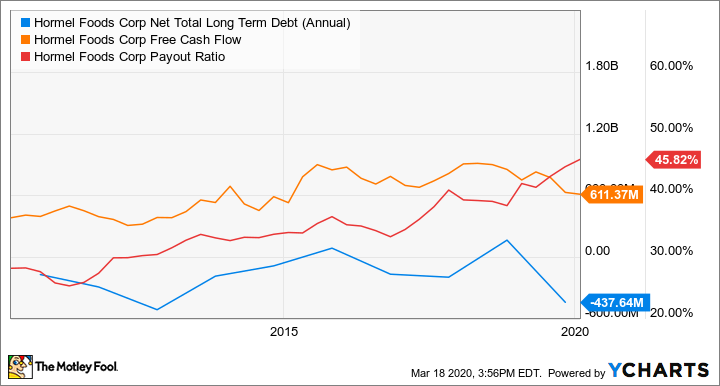 Putting it all together, Hormel looks like a decent stock to invest in for conservative long-term investors, particularly in the current environment.

It would be a mistake to think that the beverage can manufacturer's revenue isn't exposed to cyclical risk. Its significant customers include Coca-Cola and Anheuser-Busch  -- both companies have already served notice that the coronavirus in China hurt their sales in the first quarter, so it's highly likely the internationalization of the outbreak will hurt sales beyond the first quarter too.

However, it's also a mistake not to recognize that it's definitely not the most cyclical industry out there, and Ball Corp also has an opportunity to benefit from lower aluminum prices reducing its costs, ultimately leading to an increase in profit even though revenue falls -- something that happened during the last recession.

In a nutshell, if economic activity is constrained in 2020, then demand for metals like aluminum will fall and it's likely the price will, too -- that's good news for a company with relatively stable end demand like Ball Corp.

Moreover, it's worth noting that the company has a very strong competitive moat -- just five companies manufacture nearly all the metal beverage containers in North America, and Ball is responsible for 42% of the production of recyclable beverage containers in North America. Throw in the point that consumers are increasingly favoring more environmentally friendly aluminum cans over plastic, and the long-term future looks bright for Ball.

Currently trading on less than 20 times analyst estimates for 2020, Ball Corp is an interesting option for investors looking for a stock whose earnings might prove more resilient than most in a slowdown. Similarly, Hormel's combination of excellent balance sheet and free cash flow generation might even lead it to make some opportunistic acquisitions -- something in line with management's overarching aims.

All told, both stocks are worth a look for cautious investors looking for a relatively safe place to hide in very turbulent markets.

2 Dividend Stocks You Can Safely Hold for Decades

3 Recession-Proof Stocks to Buy in January