One is a railroad operator and the other a beverage can manufacturer, but these very different companies have similarly attractive features for long-term investors.

Let's start with a disclaimer: These two stocks haven't been selected for their yields right now -- anyone can run a stock screener and find dividend-paying stocks with high yields. Instead, these companies were chosen for what they could be paying in the coming decades.

investors looking for stocks that look promising based on that standard will be searching for companies where they can have a high degree of confidence that earnings growth is sustainable for the long term and there's good potential for dividend increases. Here's why railroad Norfolk Southern (NSC 0.63%) and beverage can manufacturer Ball Corp. (BALL 2.92%) fit the bill. 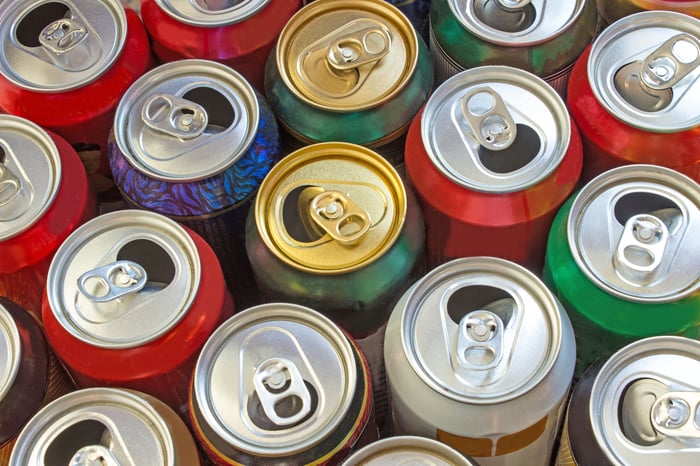 The four Class 1 railroads in the U.S. operate as effective duopolies, with Union Pacific and Warren Buffett's BNSF sharing the West, and CSX and Norfolk Southern in the East. Furthermore, they own their own infrastructure, meaning they have almost unassailable moats.

Moreover, in recent years all of those Class 1 railroads have adopted a set of management principles called Precision Scheduled Railroading, or PSR. In contrast to the former hub-and-spoke model, PSR is based on running trains from point to point within a network on a fixed timetable -- and pricing is adjusted to keep capacity utilization high.

The evidence is that PSR works, and it seems to be producing a step-change in profitability for the railroads. Indeed, Norfolk Southern has some aggressive plans to boost its profitability in the coming years. Management believes it can get its operating income margin up to 40% this year -- in line with its rival CSX. 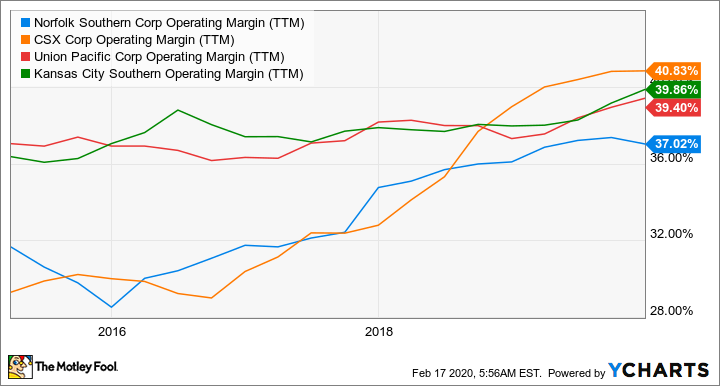 In addition, if PSR also produces operational improvements for customers, then it increases the ability of the railroads to grab market share in transportation from the trucking industry. Not least because, according to the Association of American Railroads,using rail rather than by trucks cuts the greenhouse gas emissions associated with freight transport by 75%." Moreover, shifting more transport to rail could reduce road maintenance costs for U.S. taxpayers.

All told, Norfolk Southern is highly likely to be around for decades to come, and has plenty of potential growth drivers that could allow it to push its dividend higher. As the chart below illustrates, its dividend payment is well covered by free cash flow. Combine the potential for margin expansion due to PSR, revenue growth in line with U.S.  economic growth, and the rail's potential to steal market share from trucking, and it's clear why Norfolk Southern should be an attractive option for long-term investors. 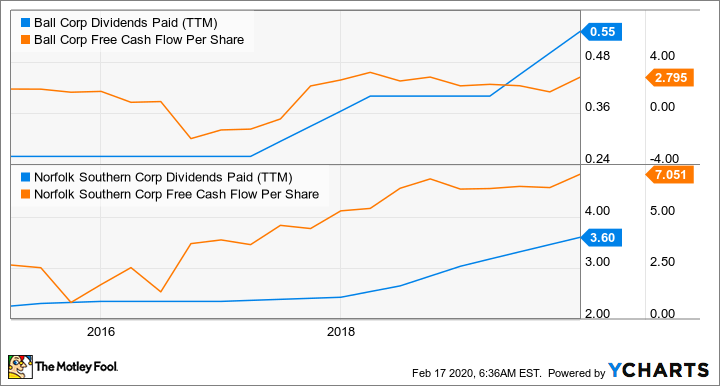 Beverage can manufacturing is far from being a sexy business. However, underlying demand for cans has proven stable even through recessions, and the industry has growth opportunities as consumers' rising concerns about the environment drive a shift away from plastic and toward aluminum. Throw in the growth in specialty-container use and the future looks bright for the industry. In fact, on an earnings call last year, Ball CEO John Hayes said management now believes that beverage can unit volumes will grow at a 4% annualized rate over the long term -- a significant upgrade from the company's previous guidance for 2%.

If that is an accurate forecast, then it will be great news for the company, because it operates in a relatively mature industry where there are significant competitive moats in place. According to Ball's SEC filings, only five companies manufacture nearly all the metal beverage containers in the U.S., Canada, and Mexico, and Ball produces about 44% of the recyclable aluminum beverage cans in those countries.

Contracts with customers are usually on a multiyear basis, and capacity is built out in response to customer demand. In other words, capital expenditures are made with the surety of projected future income. As the chart below illustrates, Ball is pretty good at generating return on shareholder equity. 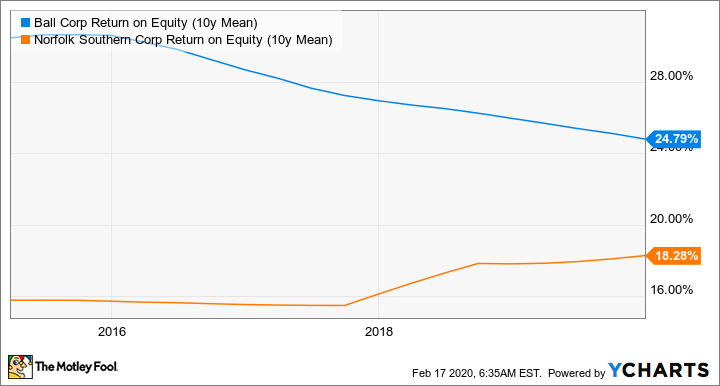 I think it's a pretty safe bet that consumers will still be drinking out of aluminum cans in the decades to come, and Ball is likely to be there filling the demand for them.

At today's share prices, Ball's dividend yields 0.8% and Norfolk Southern's yields 1.8%. Those numbers might not appear anything to write home about, but if you're buying stocks you plan to hold for decades, then you want to pick companies you can be sure will be around for decades, and growing their dividends to your benefit. Both of these stocks meet that standard.