It's been an unusual earnings season for the Class 1 railroads. Their revenue is usually tied to conditions in the industrial economy, and with the news being more negative than expected on that front, it would be understandable if the sector had underperformed.

However, the reality is that CSX, Kansas City Southern, and Norfolk Southern have all notably outperformed the S&P 500 index, and Union Pacific has tracked it. What's going on, and can it continue? 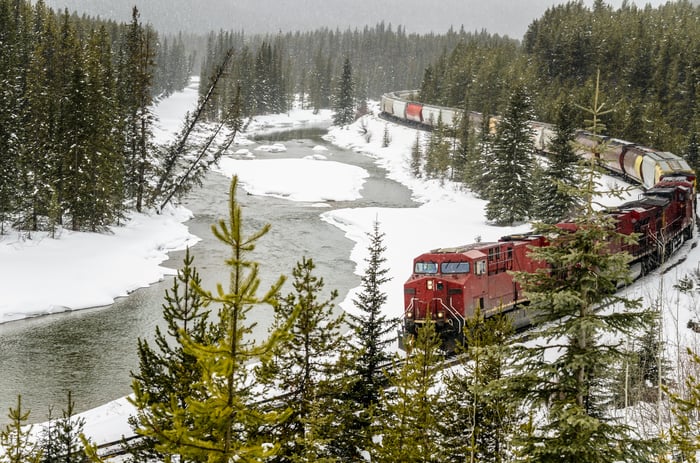 Precision scheduled railroading to the rescue

The answer lies in the profit improvement being generated by the wide-scale adoption of precision scheduled railroading (PSR) in the industry. Simply put, the results from the railroads provided evidence to suggest they could continue to generate improvements in profitability even with declining revenue, and the railroads have seen good stock performance as a consequence. 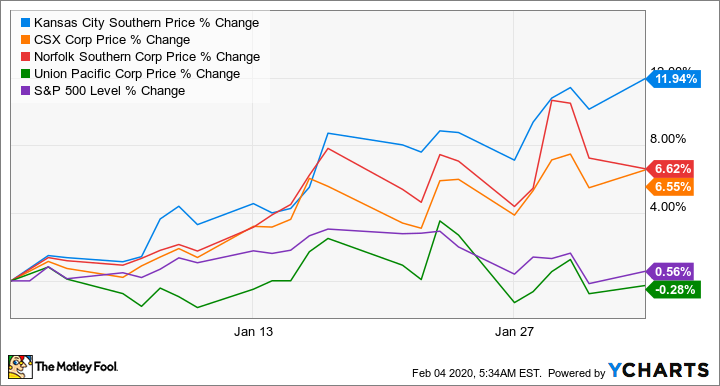 For the uninitiated, PSR is a set of management principles based on running freight on fixed scheduled trains on a point-to-point basis rather than the traditional hub-and-spoke model. As a result, railroads aim to improve metrics such as train velocity and terminal dwell (amount of time a car spends at a terminal location), and ultimately run freight using fewer assets.

The end result of this is intended to be a lower operating ratio (OR), a metric that refers to a railroad's operating expenses divided by its revenue; a lower number is better.

Naturally, there have been fears that the reductions in OR in recent years have largely come about as a consequence of an improving economic environment and a concomitant lowering of the OR as revenue increases drop down into increased profit. This is a common occurrence in businesses with high fixed costs, such as railroads, which own their own infrastructure.

As noted above, the results from all of the railroads demonstrated ongoing improvement as well as outlooks that suggest further improvement in 2020. Indeed, even a relatively early adopter such as CSX sees notable improvement ahead. Meanwhile, relatively late adopters such as CSX's east coast rival Norfolk Southern and Kansas City Southern look set for some dramatic improvements in OR in the coming years. Meanwhile, Union Pacific's relatively mundane -- but still improving -- OR outlook is probably behind its underperformance versus its peers.

It's worth noting that the railroads' volume and revenue outlook is mediocre in the near term, so the anticipated OR improvements in 2020-2021 are definitely not down to an improving backdrop. In fact, the midpoint of CSX's guidance calls for a revenue decline of 1% in 2020, while Norfolk Southern sees it as "flat" on 2019. Union Pacific management sees its volumes as being slightly positive in 2020, and Kansas City Southern management merely said revenue and volume would be "better."

Putting all of this together, investors have reason to believe that the operational improvements generated by PSR are here to stay, and the OR could receive a boost given a pickup in economic growth -- something the railroads are calling for in the second half of 2020.

Throw in the possibility of a thawing in the trade conflict leading to an improvement in trade, and the outlook for profit improvement in the railroad sector is looking a lot better than it did six months ago, even as railroads continue their battle to offset declines in coal volumes coming from the decreasing use of coal as an energy source.

All told, the fourth-quarter earnings reports and guidance on OR were a net positive, and the market has reason to feel good about the profitability outlook for railroads in the next few years.