Please ensure Javascript is enabled for purposes of website accessibility
Log In Help Join The Motley Fool
Free Article Join Over 1 Million Premium Members And Get More In-Depth Stock Guidance and Research
By Rhian Hunt - Mar 23, 2020 at 10:33AM

The beer company has decided to help fight COVID-19 by increasing the sanitizer supply.

Beer giant Anheuser-Busch InBev (BUD 2.37%) announced on Saturday it plans to begin producing and distributing hand sanitizer in the U.S., in addition to continued bottling of its famous beverage brands, such as Budweiser. The declaration took the form of a Tweet, which also featured an image of the hand sanitizer container. Anheuser-Busch's move comes as consumers' stockpiling of hand cleansing products sweeps America's supermarkets and pharmacies bare. 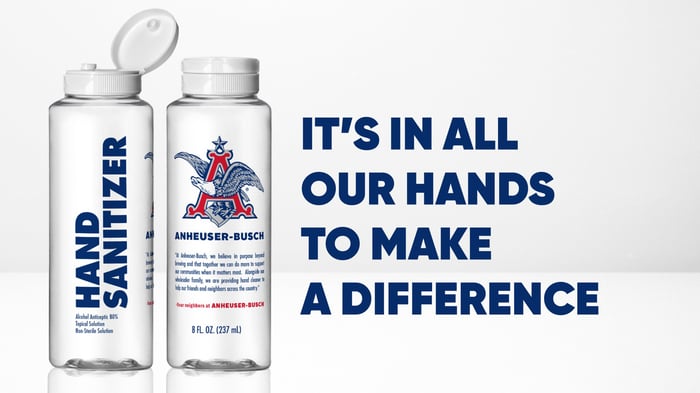 In a followup Tweet responding to a customer question, Anheuser-Busch added that it would consult with the American Red Cross and other nonprofit partners to figure out the best places to send the newly bottled sanitizer. The company said it's using its extensive supply and logistics network to get the sanitizer into production and into the hands of those who need it. The enterprise has already taken various measures to continue operating through a potentially long and rocky market disruption, including drawing down $9 billion worth of credit to maintain liquidity.

This isn't the first time this month the brewing titan made a splash with relief efforts. It produced 150,000 cans of fresh drinking water at its facility in Cartersville, Georgia, for Red Cross use, following the lethal Tennessee tornado outbreak of March 3 which killed 25 people.

Anheuser-Busch's hand sanitizer will come packaged in 8-ounce bottles. These containers bear logos and design motifs that echo bottle aesthetics used for several of its beer brands. According to the packaging shown, the sanitizer will consist of a non-sterile 80% alcohol antiseptic solution. The CDC recommends a minimum of 60% alcohol for an effective sanitizer.