Please ensure Javascript is enabled for purposes of website accessibility
Log In Help Join The Motley Fool
Free Article Join Over 1 Million Premium Members And Get More In-Depth Stock Guidance and Research
By Will Healy - Mar 25, 2020 at 9:51AM

Potential investors in this tech giant have to weigh deep uncertainty about the stock right now against a low multiple and a healthy dividend.

IBM (IBM -0.81%) faces a critical time in its history. Even before the negative financial effects of COVID-19 became a concern, IBM faced a major transition with Arvind Krishna preparing to take the CEO role. Now, with coronavirus putting deep pressure on IBM stock and the market in general, the stakes for investors have become that much more significant.

IBM seeks to again redefine itself

IBM technically still stands for "International Business Machines," and certainly, investors should not forget about its supercomputers. Researchers use these machines for multiple applications. Among other uses, they are running simulations to help in the fight against coronavirus. The demand for quantum computing is also such that the company announced it would build a second quantum computer in Germany, which should be operational by early 2021. 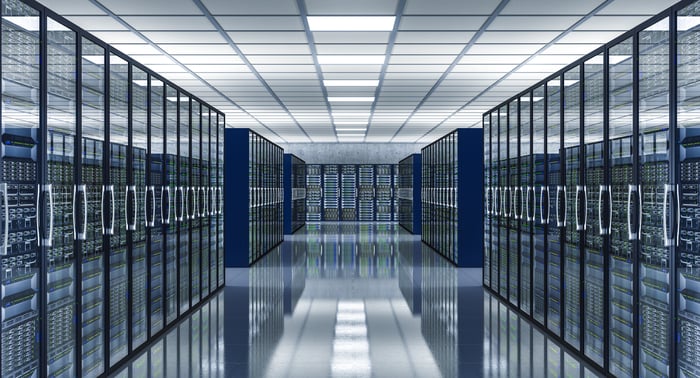 Still, despite these high-profile computers, the "machines" part of the company has received less emphasis in recent years. Today, the cloud has become a more prominent part of its business. The company spent $34 billion to acquire Red Hat last year to improve its cloud computing offerings. As a result, it holds $54.1 billion in long-term debt. With just under $21 billion left after subtracting liabilities from assets, this may have become an "all-in" bet on the cloud.

This transition to the cloud happened during the tenure of CEO Ginni Rometty. However, the 2010s were a decade most IBM stockholders would probably like to forget. When Rometty took the helm in January 2012, IBM stock opened at $186.73 per share. At today's levels, the stock has fallen approximately 49%.

In fairness, this would be a more modest decline if you compare it to the 2020 high of $158.75 per share on Feb. 6, before the wider market downturn started to accelerate a couple weeks later. Still, this highlights a lack of stock price growth during Rometty's time as CEO. 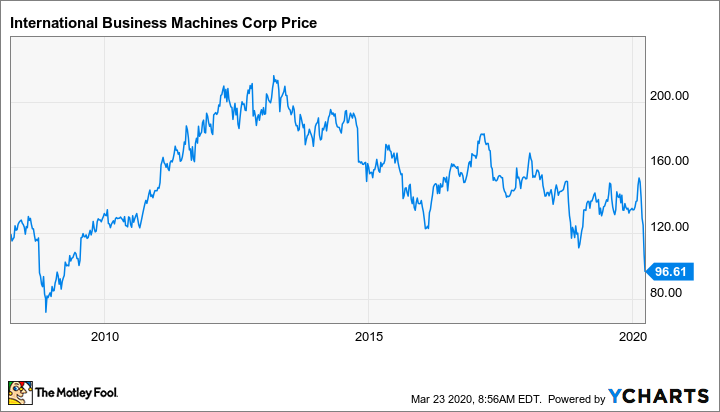 Is IBM the next Microsoft?

Now, prospective buyers will be taking a chance on an IBM in transition. Time will tell whether a company known for punch cards in the mid-20th century and home PCs in the 1970s and 1980s is going to remake itself yet again. However, many cannot help but notice the parallels between Arvind Krishna and Microsoft CEO Satya Nadella.

Nadella, like Krishna, headed the cloud computing division of his company before becoming CEO. Nadella turned a PC-era entity into one of the premier cloud companies. The remaking of Microsoft resulted in that company again attaining the world's largest market cap. While it now battles Apple on a day-to-day basis for that title, Nadella has succeeded in again making Microsoft one of the top tech stocks.

Moreover, given the current sell-off, a successful IBM turnaround could bring considerable gains for investors. For the first time since 2009, IBM stock trades below $100 per share.

This swoon has taken IBM's forward price-to-earnings (P/E) ratio to about 7.1. Even with earnings growth forecasted at just 3.9% this year and 6.1% in fiscal 2021, this valuation seems low. It also compares well to the S&P 500 average P/E ratio of around 17.3.

Additionally, even if a stock price recovery takes some time, IBM will pay investors well while they wait. Thanks in part to the drop in the stock price, the dividend yield has risen to an unusually high level of about 6.8%. This is about 2.7 times the 2.5% that S&P 500 stocks yield on average. Moreover, the payout has also increased for 20 consecutive years, taking IBM to within five years of achieving Dividend Aristocrat status.

Profits for IBM have declined by an average of 5% per year over the last five years. However, the payout ratio, or the percent of profits that go to the dividend, stands at about 48.7%. While not low, it shows that IBM's problems have not yet compromised the company's ability to cover the dividend.

This does not necessarily mean that IBM will have a trillion-dollar market cap anytime soon. It does not even guarantee that Krishna will successfully repeat Microsoft's cloud success at IBM. Certainly, the company's financials do not leave the company with a significant margin of error in this regard.

However, it does pave a well-worn path that IBM can follow that could return it to growth. With the stock trading at a low multiple, and the company offering a high dividend yield, it could pay for investors to take a chance on IBM at current levels.