Please ensure Javascript is enabled for purposes of website accessibility
Log In Help Join The Motley Fool
Free Article Join Over 1 Million Premium Members And Get More In-Depth Stock Guidance and Research
By Daniel B. Kline - Mar 26, 2020 at 10:20AM

Restaurant chains built around delivery are set up to succeed during this time of social distancing.

Not every business that has significant success during the coronavirus pandemic makes sense as a potential stock to add to your long-term portfolio. Some strong companies will get stronger during this crisis, while some others will look strong simply because they sell things that people need right now.

In some cases, the added attention will lead to a longer-term spike in business. In others, the company's weaknesses will once again be exposed once the COVID-19 pandemic has eased.

A tale of two pizza companies

Domino's (DPZ -0.40%) and Papa John's (PZZA 0.01%) have both seen sales spike due to the coronavirus. That makes sense because the two companies entered the pandemic with a delivery/pickup model (though some Papa John's locations do offer limited seating). 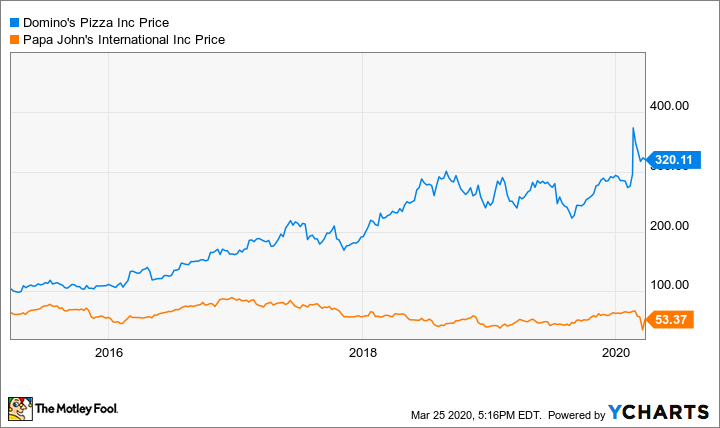 The difference between the two companies, however, are significant. Domino's has had 104 straight quarters of international same-store sales growth and 35 consecutive quarters of same-store sales growth in the United States. It has also been growing profits, with earnings per share growing by 19.1% to $3.12 in the fourth quarter and full-year EPS coming in at $9.37, up 13.7% year-over-year.

Domino's is also a technology innovator. It has been one of the restaurant industry leaders when it comes to pioneering its app and getting customers to use it. Domino's also -- and this is pretty important -- never had to manage a racially insensitive founder who would not stop talking. John Schnatter, or Papa John himself, no longer has an active role with the pizza chain. The taint he left, however, has dug a pretty big hole for the company.

The pizza chain has made progress, but it's also had to invest heavily in resetting its image with customers and bolstering struggling franchises. It has never been the innovator Domino's has when it comes to technology -- and I'd argue that its menu innovation has been fairly weak as well.

The coronavirus will drive sales for both companies, and it will bring some customers back to Papa John's. It's not, however, a sure thing they will stay once the current crisis ends. 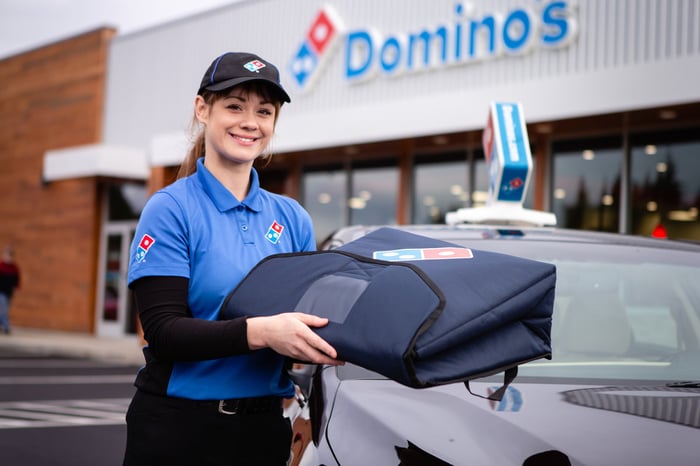 Domino's has been a pioneer in delivery technology. Image source: Domino's.

Domino's has built its business around making it really easy to get its mediocre-at-best pizza. Papa John's has built its business on the slogan "better ingredients, better pizza." That's true if you have only eaten bottom-tier frozen pizza, but anyone who has sampled pizza from most local places -- and pretty much any of the new fast-casual made-to-order chains -- knows that Papa John's most certainly does not have better pizza.

The coronavirus will force more customers to download the Domino's app and increase its business in the short-term, and it's likely to keep some of those customers, adding them to its already steadily growing business. Papa John's may have the same experience, or it might just be an available choice during a time of scarcity -- like buying off-brand toilet paper because it's all that is in stock right then. It's hard to know because when it comes to convenience and technology Domino's has its rival beaten.

Domino's will be a coronavirus winner that enhances its business long-term based on how it's serving people now. Papa John's could end up telling the same story for a while, but it's no guarantee -- making Domino's a better pick for your portfolio for the long-term.