Please ensure Javascript is enabled for purposes of website accessibility
Log In Help Join The Motley Fool
Free Article Join Over 1 Million Premium Members And Get More In-Depth Stock Guidance and Research
By Dan Caplinger - Mar 26, 2020 at 8:51AM

We've never seen so many people need unemployment benefits at the same time.

The coronavirus pandemic has disrupted the lives of nearly everyone across the globe. Employers have told millions of workers to stay home, in many cases in response to orders from state and local governments for nonessential businesses to close their doors temporarily. That's creating a flood of people being out of work and needing to take advantage of the programs available to the unemployed.

Every week, the Labor Department announces the number of people making claims for unemployment benefits for the first time since losing their jobs. Today's number of 3,283,000 initial unemployment claims was by far the largest ever for the program, and the sudden jump will inevitably put pressure on the unemployment benefits system to ensure that so many people get the money they need. Below, we'll look in more detail at exactly what today's jobless-claim numbers are and what they mean.

What jobless claims are 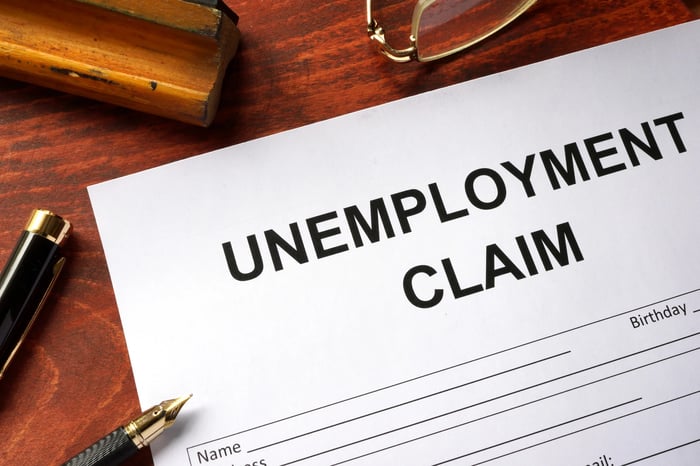 When workers are laid off or are otherwise eligible for benefits, they can file a claim within a short period of time. The benefits aren't enough to replace what the workers got from their job. But the amounts -- which vary from state to state -- are designed to help with essential living expenses and to bridge the gap until the employees can find other work.

Just how big a jump did we see?

Just about everyone watching the economic data expected the jobless claims to soar from previous levels, but estimates of the exact number varied greatly. Some believed that as few as 1 million would need to file for unemployment, while a few others had projected as many as 4 million. In general, the 3.28 million figure was higher than the consensus forecast among economists.

Which states saw the biggest changes?

Different areas of the country saw varying effects on employment from the coronavirus outbreak. Pennsylvania saw the biggest jump in claims, rising by more than 363,000 from the previous week. Ohio, New Jersey, Massachusetts, Texas, and California were the next five hardest-hit states, and joining them with increases above the 100,000 job mark were Michigan, Washington, Minnesota, and Illinois.

The big question looming is whether this week will prove to be the big one in terms of newly unemployed people claiming benefits. If it's a one-week phenomenon, then it could provide some confidence about the potential scope of the problem. If the number of new claims stays at heightened levels for a while, then it will show that the size of the economic impact of the coronavirus could be far larger than many have thought until now.