Please ensure Javascript is enabled for purposes of website accessibility
Log In Help Join The Motley Fool
Free Article Join Over 1 Million Premium Members And Get More In-Depth Stock Guidance and Research
By Bram Berkowitz - Updated Mar 27, 2020 at 8:06AM

Lenders that can handle the demand in volume, and other companies that play a part in the process, could see some tailwinds.

The effects of the coronavirus will likely force many companies to cut revenue projections, and in some cases even bring their businesses to a complete halt. This is not good for lenders because when business activity slows and people fear a recession, they stop investing in their businesses and therefore stop taking out loans. U.S. GDP projections have already been cut significantly.

Despite the bad news, there is perhaps one bright spot for lenders: The sharp decline in interest rates from around 2% going into March to zero now has prompted a surge of refinancing activity on home mortgages. When people refinance, they change the terms of their loan with their bank or lender so they are paying a lower monthly interest rate. While that means less in loan payments for lenders, homeowners must pay application and closing fees to get this deal, which is immediate revenue for those lenders. As a result of lower interest rates, the Mortgage Bankers Association on March 10 projected that total mortgage originations would grow more than 20% year over year from 2019, driven largely by refinancing activity. 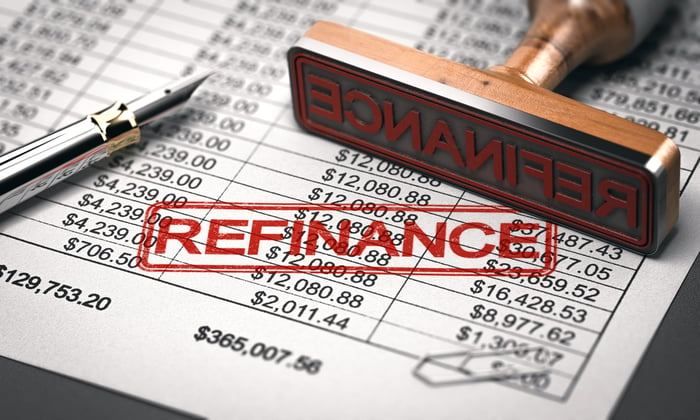 Contrary to what some might think, long-term mortgage rates do not move directly with the Federal Reserve's benchmark lending rate. They move directly with the 10-year Treasury bill, which, in normal times, is influenced by the benchmark lending rate. When the Fed dropped interest rates a half point at the beginning of March (which feels like ages ago now), the move sent the 10-year Treasury bill to an all-time low, briefly under 0.5%, causing mortgage rates to tumble to perhaps the lowest they have been in the last decade. The 30-year fixed mortgage product averaged 3.29% in the week ending March 5, according to Freddie Mac, with some banks saying they had briefly offered refinancing rates below 3%. That prompted a wave of refinancing activity. 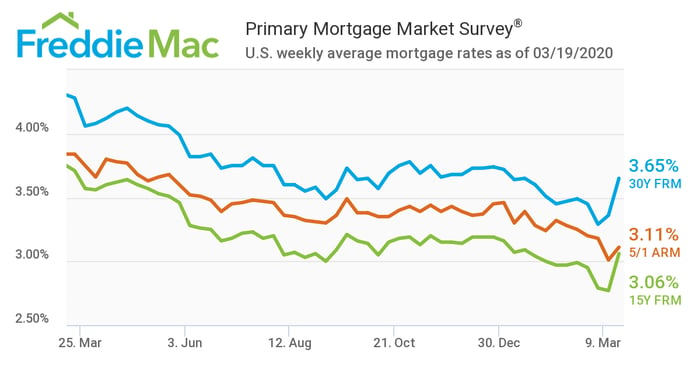 However, as the effects of coronavirus continued to cause chaos in the markets, the Fed intervened with other drastic monetary moves, and the federal government got involved as well, creating volatility in the bond market. The 10-year rate suddenly surged to almost 1.2% on March 18, bringing the average mortgage rate on the 30-year fixed product to 3.65%, the highest it has been since early January. But, either on news of the huge stimulus bill or perhaps the announcement by the Fed of even more quantitative easing, the 10-year Treasury began to come down again on March 23. Overall, it has been bouncing around, but keep an eye on it because it pulls mortgage rates with it.

The companies that could benefit from this are lenders that regularly do lots of purchase mortgages eligible for refinancing, and that have the expertise to carry out a huge incoming volume of refinancing activity. According to federal data from 2018, while many of the top mortgage companies are private, Wells Fargo (WFC 2.14%) did the second-most home purchase loans and the second-most refinance originations. In 2019, the bank had 15% of its total assets in residential mortgages. Other big banks like JPMorgan Chase and Bank of America are good candidates as well.

But you may also want to look at banks or companies that are less complex and have higher concentrations of mortgage lending. Take the Third Federal Savings and Loan Association of Cleveland, whose parent company is TFS Financial (TFSL 0.33%) -- with roughly $15 billion in assets, Third Federal originates almost all of its loans in residential mortgages, although hopefully it has the capacity to keep up with demand. Or consider a stock like Zillow Group (ZG 8.31%) (Z 8.33%).  While the company does not directly do refinancing, it serves as an advertising marketplace for lenders, which pay Zillow based on cost per click or cost per impression. The company is by far the most popular real estate website in the U.S., with roughly 36 million unique visitors each month.

Keep an eye on the 10-year treasury

Based on what happened in early March after the Fed did that initial half-point drop in interest rates, it is clear that consumers are watching mortgage rates closely. The 10-year bill should come down again when the dust settles, and considering that home purchases have been falling, lenders are going to make most of their income in their residential departments from refinancing activity. Look for companies that can handle the spike in demand or are involved in the process in some other way.