Apparel retailers continued to get hammered by the COVID-19 pandemic.

Shares of retailers including Macy's (M 0.96%), Gap (GPS -0.10%), and Under Armour (UA 1.20%) (UAA 0.32%) were all heading lower today due to a mix of downgrades and negative reports as the broader market pulled back after three straight days of gains. 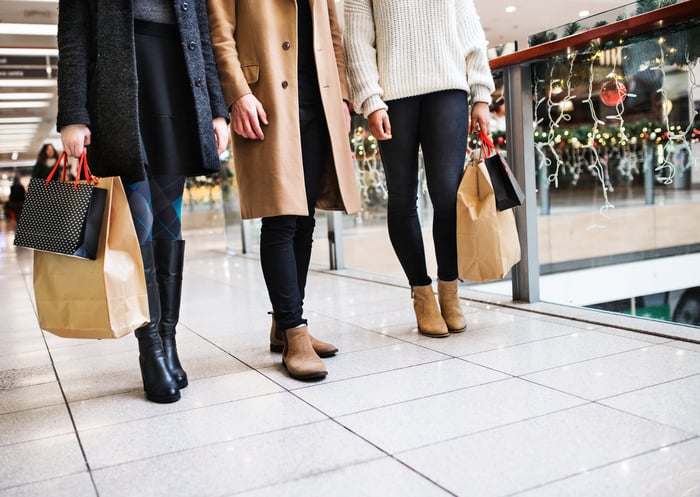 After a three-day gain on hopes that the rescue package coming out of Congress can keep the economy on its feet, stocks fell back again today. Last night, the U.S. topped Italy to become the country with the most COVID-19 cases in the world, and this morning, Boris Johnson, the U.K.'s prime minister, tested positive for the disease.

Retailers, especially discretionary ones like the trio above, have been particularly vulnerable to the crisis. They have had to close down stores, and they don't know when they'll reopen. Therefore, the negative sentiment in the market today helped push those stocks lower.

Macy's got hit by a downgrade from Cleveland Research from neutral to underperform. Analyst Rusty Wilson said that comparable-store sales began to fall in the second week of March and have significantly deteriorated since then. Wilson also said that e-commerce sales had not added a significant benefit, and that the company was pausing or canceling most of its orders through May, showing it doesn't expect business to recover for at least a month.

Macy's had said on March 17 that it would close all of its stores through the end of the month, and then said a few days later that it was suspending its quarterly dividend, accessing a $1.5 billion credit facility. It also said that CEO Jeff Gennette wouldn't receive any compensation during the crisis.

Like Macy's, Gap said on March 17 that it would close its stores, and followed that up with a business update last night. It will draw down the $500 million in its credit facility, suspend dividend payments, reduce capital expenditures by $300 million, review all operating expenses, and realign its inventory according to expected sales trends. The company also pulled its guidance, but noted that it remains open for business online and that it generated $4 billion in online sales last year. By sales and store count, Gap is one of the biggest apparel retailers in the country, and its update, along with Macy's, shows how challenging the current crisis is for apparel retailers.

Finally, Under Armour also got tripped up by an analyst downgrade as Stifel lowered its rating from buy to hold and dropped its price target from $16 to $11. Analyst Jim Duffy said the pandemic would hamper the company's turnaround efforts and weigh on its performance in North America, its most important region but one where sales growth was already expected to be negative this year.

The longer the pandemic lasts in the U.S., the worse it's going to be for these companies, and there are currently no signs of the outbreak letting up. Though a number of states have implemented "shelter in place" orders and told nonessential businesses to close, the number of active cases in the U.S. is growing rapidly, and the situation is getting more dire.

In other words, these stores will remain closed for at least the next few weeks. All of these stocks are now trading for just single-digit prices. In normal times, they would be bargains, but until there are signs that the disease is being contained, the stocks are likely to continue flailing.