Please ensure Javascript is enabled for purposes of website accessibility
Log In Help Join The Motley Fool
Free Article Join Over 1 Million Premium Members And Get More In-Depth Stock Guidance and Research
By David Jagielski - Mar 28, 2020 at 6:30AM

They're cheap today and could make for terrific long-term holds.

Warren Buffett is the most iconic and well-known value investor in the world. Many investors look to follow in his footsteps and make the same moves that he makes. His strategy centers on looking for value and investing for the very long term. And so when quality stocks are down and trading at low multiples to their earnings and book value, he'd likely agree that they're good deals investors should consider buying.

Below are three stocks that would be good buys today based on Buffett's investing style.

Quest Diagnostics (DGX 0.54%) would be a good Buffett buy for multiple reasons. The diagnostics company performs testing and information services that help patients and doctors make informed decisions. It's a stable and necessary business. That's no more evident than on Quest's financials -- over the past 10 years, the company's top line has been between $7.1 billion and $7.8 billion. There hasn't been a whole lot of volatility. Quest's bottom line has been more variable, but the company's profit margin has been over 8% of sales for five straight years.

Not only is Quest consistent, but it's a good value buy. The stock currently trades at a price-to-earnings (P/E) ratio of around 14 and two times its book value. Value investors like Buffett typically look for P/E to be 15 or below, while price-to-book multiples should normally be no more than 2. Quest ticks off those boxes as it has dipped 17% year to date, compared to the S&P 500 which has declined by 23%.

Although Buffett doesn't like to pay dividends, he likes investing in companies that do. And with a quarterly dividend of $0.56, investors can earn about 2.5% per year in dividend income by owning shares of Quest. This is more than investors can typically expect to earn from the average S&P 500 stock that yields 2%. Quest has also increased its dividend payments over the years, and they've increased by 47% from the $0.38 the company was paying investors five years ago.

JPMorgan Chase (JPM 2.76%) is one of Buffett's holdings today, so it wouldn't be a stretch to say that he would think the big bank stock being down around 30% since the start of the year is a good deal. Bank stocks are another predictable type of investment that Buffett values.

JPMorgan's revenue has been above $90 billion during each of the past 10 years, and in 2019 sales grew by 6% to $115.6 billion. The company's also enjoyed a profit margin of more than 20% for six straight years. 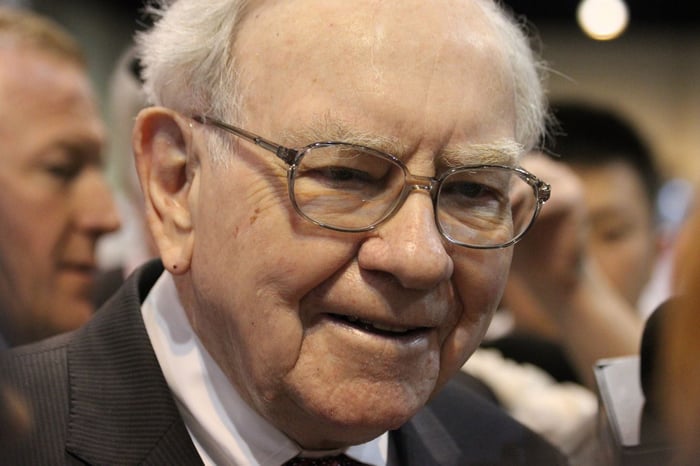 Although low interest rates aren't a good sign for bank stocks, Buffett doesn't shy away from stocks with short-term obstacles. While there's plenty of uncertainty today surrounding COVID-19 and the effect the pandemic is having on the economy, Buffett bases his decision on the long term. And over the long term, JPMorgan will likely continue to produce strong numbers, benefiting from a growing economy that's spending and lending. But today might be a good time to lock in a low price for this top bank stock.

Shares of JPMorgan trade at about nine times their earnings today and a price-to-book multiple of around 1.3.

Like Quest, JPMorgan pays a dividend. Shareholders currently earn $0.90 every quarter, which yields 3.7% annually. Since the end of the financial crisis, the bank stock's consistently been increasing its dividend payments. In five years, they've more than doubled from the $0.44 that the company paid its investors in 2015.

Delta Air Lines (DAL 3.31%) is another stock that's already in Buffett's portfolio. Despite concerns that COVID-19 is decimating the airline industry, Buffett told Yahoo Finance in mid-March that he's not planning to sell any of his airline stocks. He's confident that the economy will recover from this, and that's why he's not looking to unload his shares of airline companies.

While the coronavirus pandemic will hurt Delta and other airline stocks in the short term, it doesn't make the company a bad buy. Delta's revenue has not just been stable; it's been growing. From $41 billion in 2014 to $47 billion this past year, revenue is up more than 15% over a five-year span. The airline's also posted a stable profit margin of more than 8% in each of those years.

The stock currently trades at a minuscule P/E of four and 1.3 times its book value. Those are very low valuations, as the stock's fallen 45% during just the first three months of 2020.

The company announced in March that it would be suspending dividend payments and share buybacks as a result of COVID-19. It's disappointing for investors, but it's a necessary step amid such uncertain times. But once there's a recovery, investors will likely see a dividend return as the economy becomes more stable.

Which stock is the best one to own today?

If you're investing for the long term, then any one of these stocks can look great in your portfolio. But due to its massive decline and very low valuation, Delta may be the most appealing stock to buy today. The company will pull out all the stops it needs to weather the storm relating to the coronavirus, and once the pandemic is over, the airline stock will see travelers return and its share price will recover as well. It's not a popular time to be buying airline stocks, but Buffett-like investors know that buying now can yield great results years from now.