The COVID-19 crisis has hit restaurants hard because they are no longer allowed to serve dine-in customers. Only takeout and delivery are allowed for the foreseeable future. This has thrown a lot of people out of work and is causing many businesses to teeter financially.

Domino's Pizza, on the other hand, is swamped with so much delivery and takeout business that it is currently hiring 10,000 new workers nationwide. New hires could be anyone from delivery driver to pizza maker to customer service representative or manager. Domino's and its franchisees employ about 400,000 people worldwide. 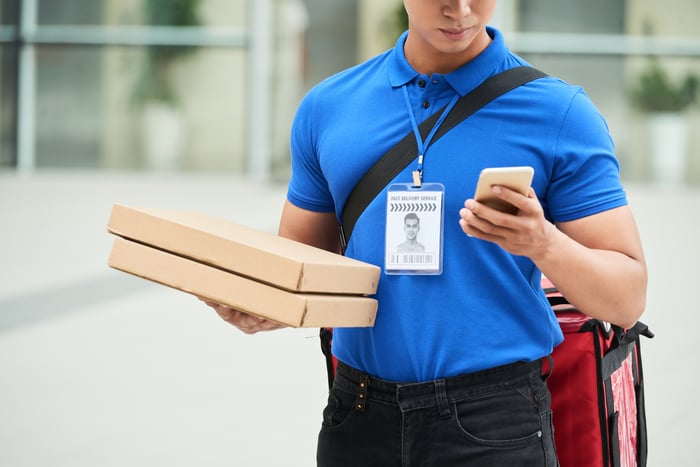 As everyone hunkers down at home, "Let's just order a pizza" has practically become a mantra. Domino's invested heavily in its mobile app a few years ago, and the convenience factor is making the restaurant chain into consumers' go-to choice.

Pickup orders placed via the app are often ready faster than phone orders, and the "check-in" feature could not have come at a better time. Customers just click a button on the phone when pulling into the parking lot, and the pizza is ready for a handoff when they walk in, minimizing contact.

Domino's is one of the world's top restaurant brands, with more than 17,000 stores in over 90 markets globally and total sales of over $14.3 billion in 2019. Delivery accounted for about 55% of sales before the health crisis, according to CEO Ritch Allison. He declined to provide current statistics.

About half of Domino's revenue comes from overseas, and India, Australia, and the United Kingdom are all major markets. The franchise store count outside the U.S. comes to 10,894. Domino's International is a model of successful international franchising, notching 104 consecutive quarters of positive same-store sales growth.

In the U.S., Domino's franchisees own 5,784 stores, and the company directly owns 342. Collectively, U.S. stores control 36% of market share and have turned in 35 consecutive quarters of comps growth.

Technology has made all the difference

Key to the company's success is the investment Domino's made a few years ago in technology. In the U.S., 65% of Domino's orders originate via digital channels including Alphabet's Google Home, Facebook Messenger, Apple Watch, Amazon Echo, and Twitter, as well as its proprietary ordering app. Internationally, more than 90% of Domino's markets offer online ordering.

The company has introduced contactless delivery in the U.S. in response to the COVID-19 epidemic. The hiring of 10,000 additional workers means quickly training new employees in new protocols for the restaurant industry. Domino's will use technology, such as virtual meetings, in that area as well.

"While many local, state, and federal governments [are issuing orders that close] dine-in restaurants, the opportunity to keep feeding our neighbors through delivery and carryout means that a small sense of normalcy is still available to everyone," Allison said. "Our corporate and franchise stores want to make sure they're not only feeding people but also providing an opportunity to those looking for work at this time, especially those in the heavily impacted restaurant industry."

Is this a delicious opportunity for investors?

Domino's Pizza had laid a solid foundation for growth prior to the coronavirus crisis. The company's focus on franchisee growth and financial success has resulted in loyalty and hard work, leading to Wall Street forecasts for three- to five-year EPS growth of 30%.

The company's 12-month forward price-to-earnings ratio stands at 31.9, compared with the restaurant industry's average ratio of 27.7. As an investor, I think Domino's Pizza deserves the premium partly because COVID-19 events have dramatically changed market dynamics in the company's favor.

But fate favors the prepared, and Domino's technology foundation is head and shoulders above any competitor's efforts, and I believe the extra attention it's getting from consumers right now will result in lasting loyalty after the crisis has passed.

A proven record of shareholder returns is a good indicator this company knows how to build an international business. Combine that with Domino's current growth, and I think the stock still has plenty of room to run. For long-term investors, Domino's Pizza is a good choice.

Domino's Pizza: A Lockdown Winner Any Way You Slice It @themotleyfool #stocks $DPZ Next Article
Current