Why Domino’s looks like a bullish pick even in the unpredictable food sector.

Here's a closer look at five important factors in the restaurant chain's success and how likely they are to keep producing profitability in 2020 and beyond.

It's using GPS to keep its competitive delivery edge

Domino's showed leadership from the start in integrating quick delivery service with the electronics age. Its CEO, Patrick Doyle, famously dubbed it a tech company that delivers pizzas, introducing digital ordering ahead of competitors in 2007. While it isn't the first restaurant to use GPS for deliveries, it's currently making a major move into utilization of this technology. 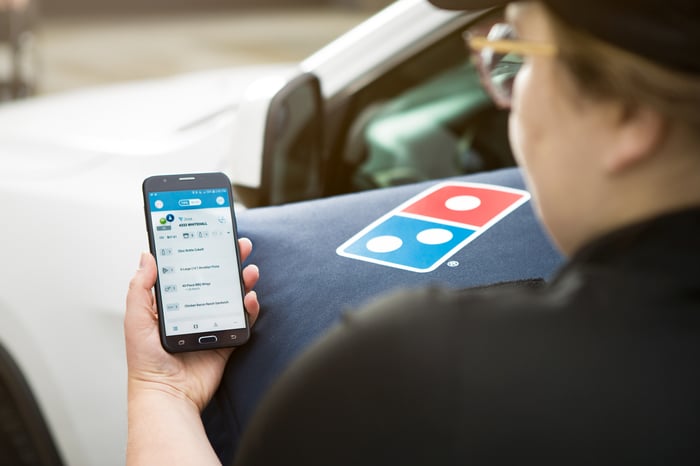 After extensive, apparently successful testing, Domino's delivery GPS tracking is getting rapidly integrated into its U.S. restaurant locations. Approximately 25% of its American stores were upgraded in this way by the end of 2019. The same system uses satellite data to send customers text message notifications when their pizza is two minutes away, and again on arrival, relieving them from waiting tediously at the door.

It's watching new tech for opportunities

5G might seem to offer little advantage over current connections for pizza ordering, but the key takeaway is that even if 5G doesn't end up adding anything to operations, Domino's actively explores every possible new avenue for improving its business. That's how it comes up with innovations like using analytical AI to measure multiple pizza parameters, boosting prediction accuracy of preparation and delivery times from 75% to 95% and thus improving customer satisfaction.

Its international expansion is vigorous

International markets are a key area for any company looking to continue growth and expansion in the modern economy, and Domino's puts strong effort into this crucial sector. Its Australian branch, Domino's Pizza Enterprises (DMP), is currently the biggest pizza chain in the land of koalas and kangaroos, while it's expanding rapidly in Germany, France, and elsewhere in Europe. It also entered new Eastern European markets with the opening of its first franchise in the historic city of Brno, Czechia, in November 2019.

According to its most recent financial report, Domino's opened a net 174 restaurants internationally during the third quarter of 2019, compared to 40 net openings in the U.S. This brings its total to 5,985 locations currently operational in America and 10,543 abroad. Its current two- to three-year guidance calls for 6% to 8% net growth in its global number of restaurants during that period.

It's delivering real, and growing, profits

All of Domino's innovation, expansion, and energy wouldn't matter if they didn't translate into actual gains for the bottom line. Fortunately for people investing in restaurant stocks who want to add the shares of a successful pizza chain to their portfolio, the company seems to have the skill to turn its strategic and technical good sense into plenty of dollars and cents.

Domino's ratio of cash flow to capital expenditures stood at 7.6:1 for the first three quarters of 2019. The company is well able to cover capex from revenue, without the necessity of external funding, while its free cash flow of approximately $282 million for the period gives it a robust foundation for future operations.

It pays attention to investors' interests

Domino's regularly carries out share repurchases to make its stock more valuable over time. In its Q3 2019 report, Domino's indicated it had repurchased 384,338 shares during the period, totaling over $93 million and helping to wrap up the $1 billion planned buyback authorized in 2015.

Immediately following the quarter's end, at the start of October 2019, CFO Jeff Lawrence and the board of directors authorized an additional $1 billion of share repurchases over the next several years. Lawrence also pointed out that the combination of dividends and share buybacks have provided approximately $1 million daily in increasing value to shareholders over a 12-month period from the end of Q3 2018 to the end of Q3 2019.

As Lawrence's statement highlights, Domino's orderly, consistent, long-term share buybacks aren't the only way the company provides value to investors. Diluted earnings per share (EPS) increased 5.1% year over year for the third quarter to $2.05. It also paid a $0.65 per-share quarterly dividend on Dec. 27.

The most important Domino's topping appears to be success

Domino's is company that has found a solid formula of accessibility, cutting-edge technological integration, and management acumen to create a reliably profitable business model over time. It has applied these interrelated strategies effectively over the past decade to achieve such milestones as dethroning Pizza Hut as the world's largest pizza seller in 2018.

The company's ongoing pursuit of fresh approaches and dedication to flexibility show it has what it takes to compete in the 21st-century restaurant market. Regular dividends, growing EPS, and a rational, continuous share repurchase program provide steadily increasing value to investors. It pays attention to both the domestic and international arenas, producing consistent gains in both. Despite the inevitable random hiccups along the way, Domino's appears to be a solid investment to add to any portfolio.