Please ensure Javascript is enabled for purposes of website accessibility
Log In Help Join The Motley Fool
Free Article Join Over 1 Million Premium Members And Get More In-Depth Stock Guidance and Research
By Billy Duberstein - Mar 29, 2020 at 11:00AM

Thinking of bottom-fishing in these three industries? Don’t.

The current market meltdown has definitely precipitated valuations we haven't seen in a long time in certain sectors. The COVID-19 breakout has caused the government to order a sudden stop to a wide swath of businesses across the country, especially those in anything related to travel or transportation.

On the other hand, Congress just passed a giant $2.2 trillion stimulus bill, and within that bill, there's $500 billion set aside for bailouts to distressed companies. However, f you're thinking about investing in any of the following beaten-down sectors just because bailout funds might be coming, you should think twice before doing so.

That's because when a company takes federal money, there will likely be strings attached. And those strings could mean a severe dilution of shareholder value. So avoid these industries that have seen their stocks perk up on the bailout news, as they may not bounce back like you think. 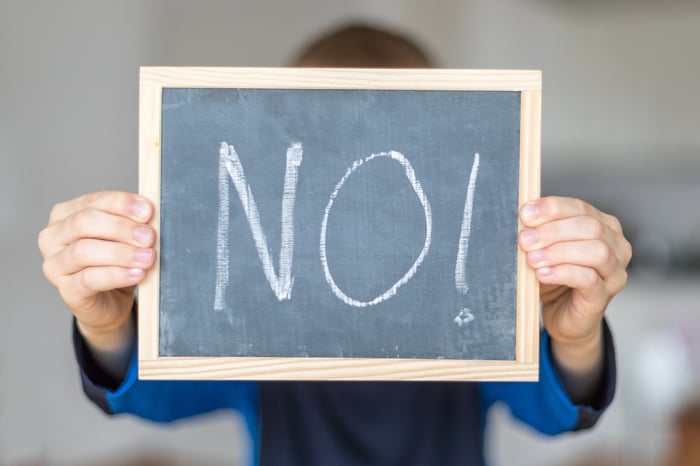 In the congressional bill, $50 billion of the $500 billion is specifically earmarked for domestic airlines, with half coming in "direct payments" to employee wages and half in the form of loans and loan guarantees. In return for bailout money, however, air carriers will have to both suspend buybacks and dividends at least through 2021. In addition, the rules state that as long as a company is "on" government assistance -- likely, until the loans are paid back -- any company is forbidden to buy back stock, and then for another year thereafter.

Finally, there is also some latitude as to how the direct payments will be administered. Quite possibly, direct payments may also come with warrants attached, potentially giving the government equity stakes in the carriers. That means that not only will the airlines come out of the crisis with additional debt to pay off, beyond the debt they've already racked up prior to the crisis, but their share counts may also go up, diluting shareholders even further.

It's also possible that the airlines may need even more help than already prescribed in the legislation. Despite the $25 billion earmarked to keep people employed through Sept. 30 and another $25 billion in loans, several airlines have recently come out and said it won't be enough, and that layoffs will continue to happen if demand stays depressed for a certain amount of time. United Airlines (UAL -0.59%) CEO Oscar Munoz recently said that it will likely have to lay off people beyond Sept. 30 as it expects demand to stay depressed for months and even into next year. Meanwhile, despite the aid, Delta Air Lines (DAL -0.21%) has asked employees to volunteer for unpaid leave.

The bottom line is that while the airlines will be getting help in terms of surviving the crisis and retaining employees, it's still a messy outlook for their shareholders.

Another avoid-at-all costs is the oil and gas industry, especially those companies engaged in upstream drilling in U.S. shale. As transportation activity has cratered worldwide in response to this coronavirus pandemic, oil demand has collapsed with it. Making things worse, OPEC and Russia failed to come to an agreement on production cuts, with Russia refusing to go along. That spurred a vicious price war, with Saudi Arabia lowering prices and pumping even more to punish both Russia and the U.S. shale drillers.

That has sent Brent crude prices cratering to $27.95 per barrel and West Texas Intermediate prices down to $21.51 as of this writing. That's disastrous for shale producers, who have much higher breakeven prices than Russia and Saudia Arabia. The Federal Reserve Bank of Dallas estimates that the breakeven price for U.S. shale producers is somewhere in the $48- to $54-per-barrel range, or over twice the price at which oil is now trading.

In addition, many shale producers have funded production capex with high levels of debt, meaning many could very well go bankrupt. In fact, U.S. and Canadian oil and gas companies already saw a 50% rise in bankruptcies last year, even before all of this happened.

That means there will likely be a huge surge in oil and gas bankruptcies. While the government could come to the rescue of certain critically important and otherwise healthy companies, it's unlikely to bail out the entire sector, especially uneconomic drillers with high debt loads. Why try to pick out the potential winners here? You shouldn't.

Finally, the current downturn may be the final straw that finishes off certain brick-and-mortar retailers. Already under siege from e-commerce offerings as well as low-cost discounters, traditional department store retailers such as J.C. Penney (JCPN.Q), Gap (GPS 0.79%), Macy's (M -5.19%) and others have been value traps for years now. Unfortunately, COVID-19 has the potential to finish some of them off for good.

Like the preceding industries, these companies have been buying back shares and paying out dividends for the past few years, all while holding relatively high debt loads in addition to their real estate operating leases. Now that revenues are set to plummet, bankruptcy may be in the cards for several of these names.

While these companies have been attempting to transition to the new reality of retail by upping their omnichannel game and launching off-price versions of themselves such as Macy's Backstage, it's still an uphill battle for many. Non-essential, full-priced clothing is a consumer discretionary purchase likely to suffer if a wide recession hits the U.S., or even if people just aren't going out in public very often. Even if people do need a new sweater or jacket, they may very well turn to e-commerce offerings from some of the larger general omnichannel retailers, not these mall-based brick-and-mortar relics.

Since just about every sector of the market is being punished now, why try to be a hero and pick the bottom on an incredibly risky industry, even if government bailouts are available? There are many high-quality names in industries with strong long-term prospects that have also been taken down in the recent market swoon. For the health of your portfolio and retirement account, stick to companies you know will make it out of this mess and won't need a dilutive government handout to get there.