Please ensure Javascript is enabled for purposes of website accessibility
Log In Help Join The Motley Fool
Free Article Join Over 1 Million Premium Members And Get More In-Depth Stock Guidance and Research
By Billy Duberstein - Mar 30, 2020 at 7:00AM

Tons of cash, favorable long-term prospects, and stay-at-home products means these stocks are buys on the coronavirus swoon.

If you have spare cash you're looking to invest in this extraordinary downturn, where should you look? While the near-term movements of the market are likely to be volatile and unpredictable, investors with a long-term focus can find many bargain-priced stocks almost certain to surge higher one, five, and 10 years down the line.

Of the stocks out there, technology stocks seem especially well positioned today, even though many have been punished by the recent sell-off. Looking for the very best risk-reward scenarios today, I'd encourage focusing on three characteristics.

With these criteria in mind, the following top tech stocks seem like screaming buys at today's discounted prices, at least when viewed for the long term. 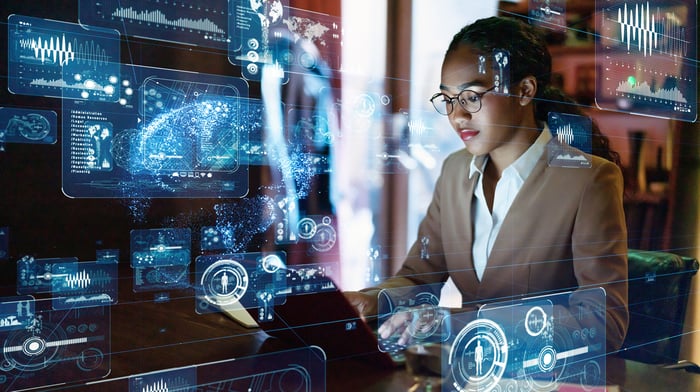 Software and cloud behemoth Microsoft (MSFT 1.70%) has proved to be one of the very best stocks to own over the past five years, and the current crisis isn't changing that narrative. Under new CEO Satya Nadella, Microsoft has transformed itself from a mere low-growth, high-profit Windows and Office software businesses into a high-growth cloud computing giant with several dominant growth platforms under its corporate umbrella. That includes not only Office and Dynamics enterprise software-as-a-service, but also its Azure cloud infrastructure-as-a-service offering, the dominant social network for business in LinkedIn, software development platform GitHub, and video game platform Xbox.

Looking at the first criteria, Microsoft's balance sheet is pristine, with $134.3 billion in cash against only about $69.5 billion in debt. Microsoft also has many high-margin, annuity-like businesses and should be able to make plenty of money even in a downturn, all while potentially buying back stock or making strategic acquisitions. In fact, the company just purchased Affirmed Networks for $1.35 billion last week amid all this chaos, giving Microsoft's Azure platform an entry into the virtualized 5G platforms of the future.

Microsoft also has favorable long-term prospects, as most of its businesses were growing quite healthily in the recent quarter. Its Azure infrastructure-as-a-service surged a whopping 64%, putting it in strong second place in the cloud infrastructure race. Microsoft also won the Defense Department's $10 billion JEDI cloud contract last year, though that contract win is currently being challenged. Microsoft also showed at least mid-teens growth across the rest of its main Office, Dynamics, LinkedIn, even Windows segments. The only laggard was Microsoft's hardware and video game business, but that segment is poised to begin a new growth stage later this year when the new Xbox consoles hit the market.

Finally, the current crisis is spurring a surge in the use of certain Microsoft products, such as Teams video conferencing software that's a rival to both Slack (WORK) and Zoom Media (ZM 1.35%). In the first week of the nationwide lockdown, Microsoft saw a 37% surge in Teams usage as users grew from 32 million to 44 million, including six new large business customers with 100,000 users each.

And with more consumers staying at home, Xbox Live saw such huge demand that it caused outages. While that's never good to have a product go down, too much demand is a much better problem to have these days than too little.

Investors may be afraid of investing in Micron Technology (MU 4.37%) in a downturn, as the memory and storage component producer has traditionally been very volatile in dire economic times. However, while it's always dangerous to say, "this time is different," this time really may be different for this semiconductor behemoth. First, the memory and storage industry is far more consolidated these days, which means the large players can more quickly adjust supply to changing demand. Micron is one of only three major DRAM producers, and this has allowed all three companies to make profits even in the recent 2019 downturn.

Importantly, Micron wisely used the riches from the 2017-2018 memory boom to shore up its balance sheet and get itself into a strong net cash position, a luxury the company had never been afforded in its previous 40 years in business.  As of the quarter ended in February, Micron had $8.1 billion of cash against only $5.4 billion in debt, and recently tapped its revolver to increase both figures by $2.5 billion, giving it $10.6 billion in liquidity.

Meanwhile, Micron was still profitable last quarter, which management had projected to be the trough of the current downcycle that started back in late 2018. For the current quarter, despite the COVID-19 pandemic, management forecasts adjusted EPS growing from $0.45 last quarter to $0.55, and that's in spite of a lot of conservatism resulting from the breakout of coronavirus.

That's because all of the DRAM producers have greatly scaled back production in response to the oversupply in 2018-2019. Meanwhile, demand appears strong in data centers, gaming, and even laptops during the quarantine period as people use teleconferencing tools and stream video and video games. This demand boost appears to be offsetting weakness in smartphone memory and automobiles, at least for now.

In fact, research site DRAMeXchange  recently forecast that even in its "bear case" scenario for 2020, it sees DRAM pricing rising 20%. That's down from the previous estimate of a 30% rise, but it still allows the major DRAM manufacturers like Micron to mint healthy profits.

Meanwhile Micron owns a strong portfolio of DRAM, Nand flash, and a new kind of memory technology called 3D Xpoint -- the only company to have all three technologies, all of which will play a vital role in a future of artificial intelligence, cloud computing, and 5G networks.

Despite a recent surge, Micron's stock is still down about 30% from its recent highs. While a prolonged recession wouldn't be good for many chip stocks, Micron's strong financial and strategic position makes it primed to weather the storm and thrive over the long run. If you can stomach some volatility, Micron seems like a solid long-term bet.

Finally, Google parent Alphabet (GOOG 2.36%) (GOOGL 2.39%) also looks like a smart long-term buy from these levels. First, Alphabet has tons of cash with about $119.7 billion in cash versus just $4.5 billion in debt as of Q4. I'd say that's a pretty safe balance sheet.

Nevertheless, investors appear to be focused on the very real advertising headwinds Alphabet will navigate for the current quarter and likely the next two quarters at least. Analysts at Cowen and Co. predict that Alphabet and digital ad rival Facebook (META 1.70%) could lose $44 billion this year in total ad dollars between them, versus prior expectations.

Nevertheless, both companies should still be hugely profitable. Last year, Alphabet made $134.8 billion in advertising revenue and $161.9 billion total revenue, while making operating income of $34.2 billion -- and those profits included $7.5 billion in losses from its venture-like "other bets" segment and other reconciling items. The same Cowen analyst still projects Alphabet to make $127.5 billion in ad revenue and still be massively profitable in 2020, even after its downward-revisions. Meanwhile, ad revenues should bounce back with political spending in the fall and return to growth in 2021 as the virus effect subsides.

Meanwhile, distributed workforces may spur the need for more cloud computing, where Google has been making big strides. Last year, Google cloud grew 52.8% to $8.9 billion, but with the core infrastructure-as-a-service platform growing much faster than that. The cloud opportunity may be underrated by investors right now, since it's likely that segment doesn't make much in the way of any profits -- in fact, it may be a negative to current profits as the company scales up.

But think about this: Many software-as-a-service companies growing in the 50%-plus range normally trade at a mid-teen price-to-sales ratio. Using a 15 multiple would mean Google Cloud could be worth $130 billion. Meanwhile, Alphabet's Waymo self-driving car unit was just valued at $30 billion in a recent funding round -- and that's just one of several of Google's venture-like other bets that are currently unprofitable but still likely worth something.

If you take all of Alphabet's other bets as being worth just $30 billion, plus Google Cloud at $130 billion, and its net cash of $115 billion, you get an enterprise value for the advertising business of roughly $490 billion. Last year, excluding losses from Google's "other bets" and reconciling items, Google's operating income was $41.7 billion.

That means the advertising business may only be valued at 12 times last year's operating income, excluding these other assets. That's far too cheap for a dominant business that grew 15.8% last year, and makes Alphabet sure seem like a bargain, despite the very well-known advertising headwinds in the coming quarters.