Please ensure Javascript is enabled for purposes of website accessibility
Log In Help Join The Motley Fool
Free Article Join Over 1 Million Premium Members And Get More In-Depth Stock Guidance and Research
By George Budwell - Mar 30, 2020 at 9:04AM

DexCom and Pfizer are both absurdly cheap right now.

The coronavirus has been bad news for U.S. stock prices. The Dow Jones Industrial Average has given back most of its gains during the Donald Trump presidency, and scores of blue-chip equities are now trading at multiyear lows as a result. Despite this historic marketwide drop in stock prices, however, most equities still aren't worth buying right now. The unfortunate truth is that the pandemic is probably several weeks away from hitting a peak in the United States, making it virtually impossible to open up the broader economy. So with little to no economic activity on the near-term horizon, stock prices are bound to print lower lows as this public health crisis deepens during the month of April.

But there are a few bright spots in this dour market. Companies that produce products essential to daily life, such as medical devices and pharmaceuticals, should eventually separate themselves from the pack. Keeping with this theme, the diabetes medical device specialist DexCom (DXCM 5.42%) and the pharmaceutical titan Pfizer (PFE 0.34%) are both trading at once-in-a-lifetime prices right now. Here's why investors may want to add these two top healthcare stocks to their portfolios soon. 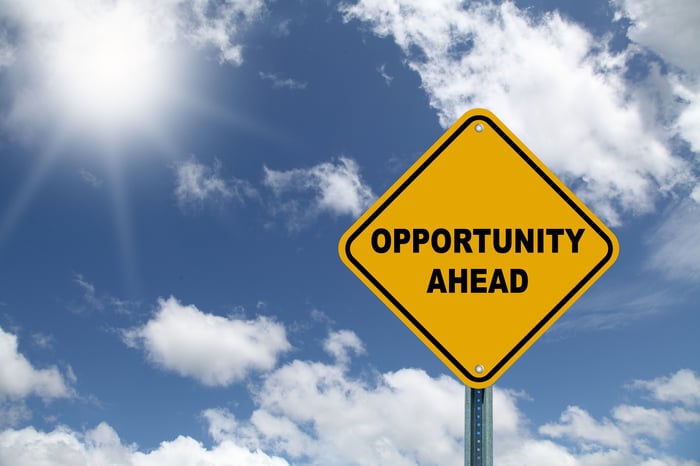 DexCom is a medical device specialist focused on battling another global pandemic: diabetes. There are an estimated 463 million adults living with diabetes at the moment. What's more, the adult diabetic population is forecast to grow at an alarming rate during the current decade, thanks to the global rise in obesity and sedentary lifestyles.

DexCom, for its part, is pitching in to help in the fight against diabetes with its game-changing G6 continuous glucose monitoring (CGM) system. By allowing patients to carefully monitor their glucose levels, this device should ultimately have a significant impact on the prevalence of diabetes-related complications such as nerve degeneration, cardiovascular disease, kidney failure, and blindness.

And so far, the G6 CGM is a smashing commercial success. Driving this point home, DexCom's annual revenue rose by an astonishing 43% year over year in 2019 to a whopping $1.47 billion, due in no small part to the enormous demand for the G6 CGM system. Moreover, the company expects this upward trend to continue in 2020, with annual sales forecast to increase to $1.72 billion to $1.74 billion for the full year.

With such a strong near-term outlook, it's no surprise that DexCom's shares have bucked the broader marketwide downturn in 2020 by gaining 20.2% so far this year. Still, the medical device giant's shares remain well off their 52-week highs.

Now, DexCom is facing some stiff competition in the CGM market, and its shares are trading in the area of 12 times next year's projected sales right now. These two issues are important risk factors that investors shouldn't simply brush aside. That said, DexCom is a proven innovator, its target market is massive and growing, and the company has a long way to go before its G6 CGM system hits a commercial peak. As such, it might be a smart idea to buy this medical device stock while its shares are still down by a healthy 13% from their 52-week high.

Big pharma titan Pfizer has had a dismal year. The company's shares have shed over 20% of their value and are now trading close to their five-year low as a result. Apart from the coronavirus-induced sell-off, Pfizer's shares have also suffered from a lack of confidence among investors and Wall Street analysts alike.

The main reason is Pfizer's plan to spin off its generic-drug business Upjohn and pair it with Mylan to form a new entity called Viatris. As this move will slash the company's annual revenues by a significant amount, investors appear to be concerned about the sustainability of Pfizer's top-notch dividend (current yield of 4.79%), along with its prospects as a growth-oriented branded drug company.

All of these concerns, however, are likely way overblown. First off, current Pfizer shareholders will own a piece of Viatris. That's important because the combined yield of Pfizer and Viatris should at least equal -- and quite possibly exceed -- the company's present annualized payout.

Secondly, Pfizer has laid out a strong case explaining why its five core growth products, consisting of Vyndaqel, Ibrance, Xeljanz, Eliquis, and Prevnar, should deliver no less than 6% top-line growth per year for the next five years. What's more, Pfizer also sports one of the deepest and most robust clinical pipelines in the industry. So this initial 6% top-line growth target will likely turn out to be a conservative estimate.

Bottom line: Pfizer's stock has gotten slammed for no good reason in 2020. So once this viral pandemic fades into the background, this top value and income play should come roaring back.