The stock should be up, not down, because of the coronavirus outbreak.

Netflix's (NFLX 5.92%) stock is going higher. It will not happen in a straight line, but in a year or two, the stock should be way higher than where it trades today. Here's why.

Netflix is a big company today, but should be an absolutely massive company over the long term. First of all, the company's strategy is truly global. Netflix is now in over 190 countries and counting. Second, there are so many more potential subscribers for Netflix to get over time. There are about 1.7 billion households around the world, excluding China where Netflix doesn't operate. With normal population growth rates, the number of global households should exceed 2 billion in twenty years. It's reasonable to think the vast majority of those will have high-speed internet connections by then. After all, twenty years is a long time, and there are global technology companies with deep pockets that are heavily incentivized to connect more of the world's people. 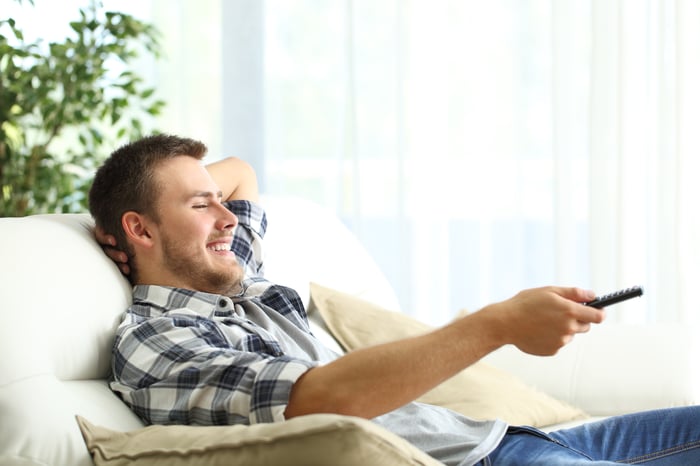 Netflix is outspending all of its global peers on content. Take India, for example. In December, Netflix founder and CEO Reed Hastings said the company is on track to spend 30 billion rupees producing and licensing content in 2019 and 2020. That's equivalent to approximately $400 million at the current exchange rate. That level of spending is blowing away the local competition. An executive at a top-five streaming video competitor in India told TechCrunch, "This is significantly higher than what we have invested in content over the past years." Another industry source said that no other streaming video is spending anywhere near that much money on content alone.

That's great for Netflix shareholders because India is a huge market. There are 1.4 billion people there and an estimated 281 million households. For context, that's twice the number of households as the U.S. has.

As Netflix grows into the over 2.0 billion potential global subscribers over time, it's going to get increasingly profitable. The company has been increasing its operating profit margins by about 3% every year and expects to do so again this year to achieve a 16% operating margin. Over the long term, it could easily have 40% or 50% operating profit margins as the company increasingly leverages its content spending across a larger and larger subscriber base.

There aren't many companies these days that are getting stronger during the current coronavirus pandemic. Many companies in the restaurant, hotel, travel, leisure, discretionary retail, and other sectors of the economy are seeing their stock prices down 30%, 40%, 50% or more as so many people are staying put in their homes and not spending money outside of the house.

Netflix, on the other hand, is a direct beneficiary of people staying at home more often. The service has an enormous library of content, much of which is original content that's been made in the last year or few years. Last week, an analyst at Credit Suisse reiterated his $440 per share price target and "Outperform" rating after seeing strong Netflix app download estimates from a third-party group. He wrote, "LatAm (Latin America) March downloads have surpassed seasonally strong 4Q levels; EMEA (Europe) March downloads are also approaching holiday peaks of the recent past; AsiaPac (Asia-Pacific) March downloads have exceeded all prior 4Q peaks, while in North America, March downloads are now higher than in each March of the past 4 years."

Since the market caught wind of the coronavirus pandemic in February, Netflix's shares are down about 8%. That's substantially outperformed the S&P 500, which is down 25%. But given that Netflix's business is getting stronger because of this, not weaker, the value of the company should be higher today, not lower. And its financial position is improving as well. As investors increasingly figure this out, Netflix shares are going higher.