The pizza chain is looking to hire 10,000 employees across the U.S.

Domino's Pizza (DPZ 1.79%) won't report its first-quarter earnings until April 23, but on Monday, the pizza chain had some goods for investors amid the concerns about the COVID-19 outbreak.

Preliminary first-quarter sales were up 4.9% in the U.S., while international stores were up 6.8% (excluding currency changes). Most stores in the U.S. have remained open, as have the supply chain centers, CEO Ritch Allison reported in a statement on March 30. 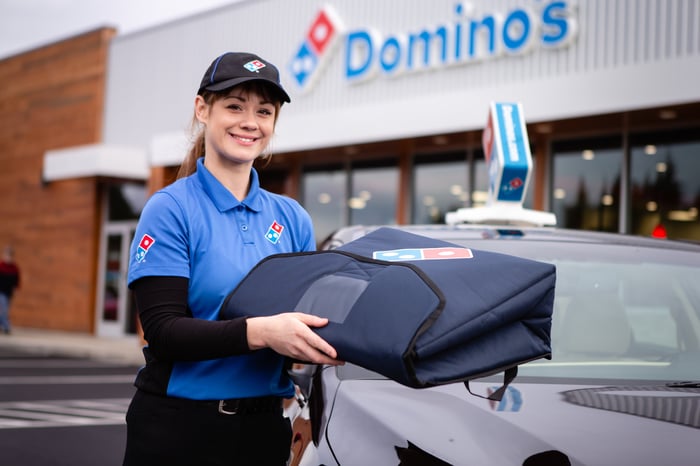 Overall, the results look positive given the circumstances. But it hasn't been smooth sailing for Domino's during this difficult time. While January U.S. sales were similar to the fourth quarter, there was a noticeable deceleration in same-store sales growth starting in February and continuing through March.

U.S. comp sales growth decelerated from 3.6% in January to 1% for the period from Feb. 24 through March 22. "U.S. sales were impacted by many factors, which have varied in magnitude across the cities and towns we serve," Allison said. He highlighted shelter-in-place orders, pantry loading, school closings, event cancellations, and the lack of live televised sports as negative factors impacting sales during this crisis.

International stores were hit the hardest, with comps decelerating from 2.3% in January to negative 0.2% in March. "China was our first market to be significantly impacted by COVID-19," Allison explained, adding, "We were pleased to see our sales there recover and accelerate in the last few weeks of the first quarter."

While the novel coronavirus dinged sales growth in the first quarter, Domino's is looking to hire 10,000 employees in the U.S., which signals there is still opportunity for growth as more people order takeout.