Please ensure Javascript is enabled for purposes of website accessibility
Log In Help Join The Motley Fool
Free Article Join Over 1 Million Premium Members And Get More In-Depth Stock Guidance and Research
By James Brumley - Mar 31, 2020 at 8:30AM

Familiar names such as Trinchero and Barefoot are tiptoeing into the market, which is a hint in itself.

Wine sales in the United States fell last year for the first time in 25 years.

The culprit behind the decline isn't easy to pin down. Tariffs haven't helped the industry, to be sure, but interest in this sliver of the booze market has been weakening for some time, perhaps reflecting societal changes in tastes. Ditto for beer -- even in the United States -- where sales of suds have declined for four years. The advent of so-called hard seltzers has been stunning with sales more than tripling in 2019. However, the young seltzer category only accounts for less than 3% of the alcohol industry's annual sales in the U.S., which surely can't upend wine's long-lived hold, right?

Actually, it can, and it probably did. Wine companies have an answer, though, and it seems they're ready to make the most of it.

Interest in sparkling wines ramps up

Sparkling wines have been around for eons. They've just not been at the forefront of the wine business. You may know them better as champagnes, even if champagnes technically only come from the Champagne region in France. Any bubbling wine produced elsewhere is gauche if labeled as anything other than sparkling wine. 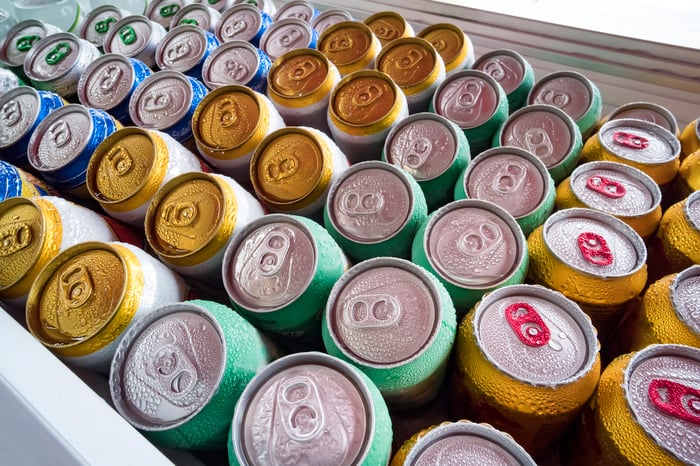 Regardless of naming traditions, this piece of the wine market is suddenly red hot. Market analysis firm GlobalData reported this month that "sparkling wine" was the most mentioned category among Twitter's wine experts during the second half of last year. And it wasn't even close. "Sparkling wines" accounted for 64% of category mentions, while wine -- in reference to traditional choices such as red and white wine -- only accounted for 31% of Twitter mentions.

It's only anecdotal evidence, to be fair, but it's not the only evidence pointing to a new craze. Google searches of the term have been steadily growing for years, soaring to record levels around Thanksgiving, Christmas, and the New Year's holiday last year before tapering off in the shadow of coronavirus concerns. That interest coincides with an increasing degree of positive media coverage of what used to be an uncovered topic.

That's not the interesting part of the development for investors, though. Most noteworthy for them is the fact that where sparkling wines are now looks a lot like where hard seltzers were around 2017 -- that is, fragmented, misunderstood, and underestimated. Since then, the rise of the hard seltzer business has drawn the attention of big names such as Boston Beer (SAM 0.04%), Molson Coors (TAP 1.76%), and even Anheuser-Busch InBev (BUD -1.07%). In fact, Boston Beer now commands about one-fourth of the entire seltzer market with its Truly brand, which launched in 2016.

If the sparkling wine craze is on the same growth track as hard seltzers -- and there's good reason to believe it is -- investors would be wise open their eyes now, even without yet being able to identify a clear leader.

Seltzers are a marketable alternative

Hard seltzers are carbonated, low-carb beverages sold in a ready-to-drink can ... an option that ticks a lot of boxes for many consumers, and for millennials in particular. Hard seltzers have also proven more marketable than beer to women as an alternative to wine, and yes, a recent survey performed by Wine Intelligence indicates that seltzers are chipping away at wine's popularity. Mark Anthony Brands, which owns market-leading seltzer brand White Claw, has seen it as well. Boston Beer chairman Jim Koch has said the same, repeatedly.

It's a modest migration in the aggregate, though. While hard seltzer sales exploded last year, they still only reached about $1 billion in the United States. That's a tiny fraction of the nation's total booze market, 11% of which still belongs to wine. Still, wine is losing ground and could continue to do so. As the millennials who love seltzer grow up and the generation after them regularly sees seltzers in stores, restaurants, and bars, the market share is seltzer's to win and wine's to lose.

The wine business may finally be starting to push back, though, with an option that's something between wine and the beer-branded seltzers that have taken off: sparkling wine in a can.

It's not a new product, to be clear. Canned, carbonated wines have been available for years. They've just not been aimed at the mainstream market by highly recognized brands middle America might recognize.

Wine producer Barefoot arguably changed that when it unveiled canned spritzers in 2017, but even then, consumers may have been unfamiliar or uncomfortable with the idea. That's changed thanks to work done by brands such as Truly and White Claw in the meantime. Barefoot now sees enough clear opportunity to step up its game, debuting Barefoot Hard Seltzer in January. Trinchero launched a wine-based seltzer under the Del Mar name just this month, also in a can.

It's this subtle option between hard seltzers -- mostly made by beer companies -- and ones made by popular wine names that may well mainstream the products that fall somewhere between wine and seltzer. The leap from wine to a hard seltzer is still a big one for wine drinkers, but the leap from wine to a wine-based bubbly beverage made by a well-known wine label isn't nearly as far.

The challenge for investors is capitalizing on the nascent trend. There aren't many publicly-traded companies that offer canned wine, and even fewer with sparkling wine. Barefoot and Trinchero are privately owned (Barefoot by E & J Gallo Winery). Other wine labels are likely to enter the market, but many of those are also privately owned.

Constellation Brands (STZ -0.95%) is one name to put on your radar, though, not because it's a powerhouse in the sparkling wine arena, but because it's well-positioned to do something with the idea. Not only does it own recognizable brands such as Woodbridge and Mondavi, it's also affiliated with Crafters Union and Arbor Mist labels, which already sell wine in a can.

A competitor could unexpectedly come from anywhere, though, as White Claw did when it took the hard seltzer lead from Truly last year. Investors simply need to put sparkling wine on their radar for now so they'll be able to spot an investment opportunity whenever one finally surfaces.