This chipmaker has beaten the broader market blues so far by winning business from its rivals.

The broader stock market has been clobbered in 2020 on account of the COVID-19 pandemic, but Advanced Micro Devices (AMD -0.80%) stock has managed to hold its ground so far. Shares of the chipmaker have shown remarkable resilience despite a rich valuation, indicating that investors continue to have faith in the company's long-term prospects.

After all, AMD is giving rivals such as Intel (INTC -0.41%) a run for their money. But if things get worse before they get better and the stock market sell-off continues, AMD may get sucked into the whirlpool of the novel coronavirus-driven downturn. In that case, the chipmaker could turn out to be a solid pick to ride a long-term recovery in light of recent developments and a potentially cheaper valuation. 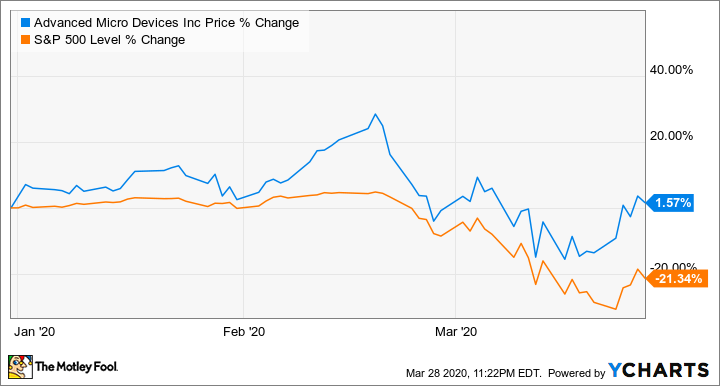 Another limitation with the Mindfactory data is that the sample size isn't very big, as evident from the numbers given above. So investors should take the report with a pinch of salt. But they should also note that the German retailer had indicated a similar outperformance last month when sales data for the eighth week of 2020 was leaked.

At that time, AMD had sold 4,185 units of CPUs as compared to just 675 Intel units. Additionally, there are other data points indicating that AMD is winning the battle against Intel in the CPU space so far this year. So, Mindfactory's data may be representative of the bigger shift toward AMD processors in the CPU market. 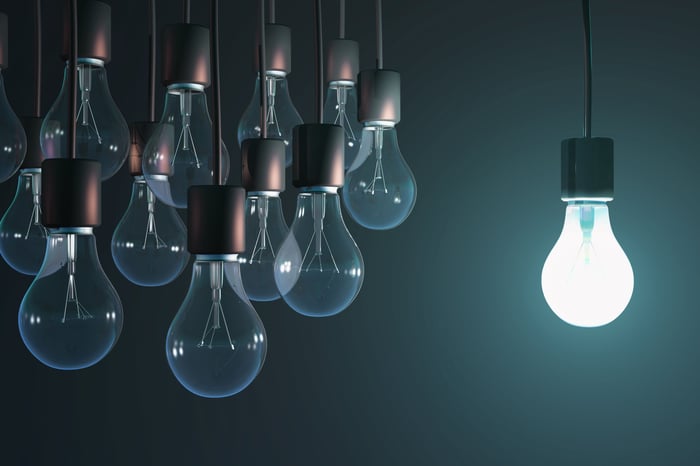 More importantly, AMD could keep eating Intel's lunch as it is ahead of the latter on the technology curve. Currently, AMD's Ryzen 3000 desktop CPUs and the Ryzen 4000 laptop chips are based on the 7-nanometer (nm) manufacturing process. Intel, meanwhile, is stuck on the 10nm process node and has conceded that it won't be as good as previous nodes in terms of yield performance.

Intel is now reportedly looking to move quickly to the 7nm process and then to the 5nm manufacturing process in a bid to cut AMD's process lead. That's because chips based on a smaller process node are more efficient and powerful as transistors on the same chip are closely packed together.

A smaller chip can carry out more calculations while generating less heat because of higher transistor density. They also cost less to manufacture as more processors can be packed into a silicon wafer because of the smaller node.

This is the reason why AMD has been able to match Intel on the performance front and also undercut the bigger chipmaker on pricing. As it turns out, AMD will continue to push the envelope as it will eventually move to a 5nm process.

Staying ahead on the technology curve

According to AMD's product roadmap, its Zen 3 CPUs will be released by the end of 2020, and they will be based on a refined 7nm process.

After that, AMD will be transitioning to the 5nm platform with Zen 4 by 2022. It is being reported that the 5nm-based chips could be a substantial improvement over the 7nm process thanks to an 84% to 87% improvement in transistor density.

Intel, on the other hand, expects to ship its 7nm CPUs in the fourth quarter of 2021. This means that AMD could move to the next step with its 5nm-based chips in 2022 and stay a step ahead of its rival. So AMD could keep eating Intel's lunch and corner a bigger share of the desktop processor market, where its share reportedly stood at 18.3% at the end of 2019 as per Mercury Research.

This means that AMD has a lot of room to grow in the PC processor market and could witness a nice bump in revenue if it keeps gaining share.