Please ensure Javascript is enabled for purposes of website accessibility
Log In Help Join The Motley Fool
Free Article Join Over 1 Million Premium Members And Get More In-Depth Stock Guidance and Research
By Adam Levine-Weinberg – Apr 1, 2020 at 8:25AM

If you can spare the $1,200 stimulus money you'll receive this month, consider investing it in high-quality companies that are trading at a discount because of the COVID-19 pandemic.

Later this month, most Americans are set to receive direct deposits of up to $1,200 per adult, plus $500 for each child age 16 and under, as the federal government tries to jump-start an economy that has been stricken by the COVID-19 pandemic.

Some people desperately need this cash to make up for lost income. However, for those whose jobs were not disrupted by stay-at-home orders and who have good financial cushions already, these $1,200 stimulus payments are coming at a great time to invest in beaten-down stocks.

If you can spare the cash, TJX Companies (TJX 1.27%), Starbucks (SBUX -2.67%), and Berkshire Hathaway (BRK.A -0.06%) (BRK.B -0.95%) are three high-quality companies trading at discounts. All three stocks have fallen by about 20%-25% since the market peaked in mid-February. However, all three are well positioned to bounce back in the years ahead. 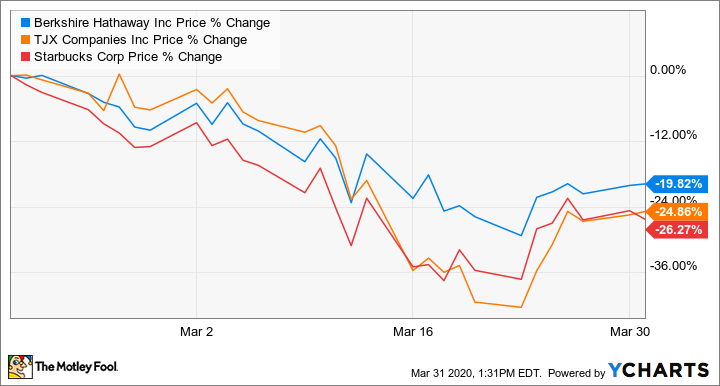 In the short-term, TJX Companies faces the same plight as other consumer discretionary companies. On March 19, the off-price retail giant announced that it would close all of its stores worldwide for two weeks to help slow the spread of COVID-19. It also went above and beyond government mandates by closing its offices and distribution centers and temporarily shuttering its e-commerce sites.

With the pandemic still in full swing, it appears inevitable that TJX's stores will remain closed for far longer than two weeks. That's not good news, but it's also not as bad as investors seem to fear. For one thing, TJX has a low-cost business model. Operating expenses totaled just $1.7 billion in last year's first quarter, including discretionary costs like advertising. Thus, even if TJX continues paying staff indefinitely, the cost would be very manageable relative to the nearly $20 billion that has been knocked off of TJX's market cap since the stock peaked.

Furthermore, TJX has ample liquidity to make it through the current crisis. As of early February, it had $3.2 billion of cash. It drew down $1 billion from its credit facility in March, suspended its share repurchase program, and recently issued $4 billion of new debt.

This reduces the pressure on TJX to quickly convert inventory to cash by implementing massive markdowns. Instead, it could follow the example of peers that routinely buy merchandise at the end of a season and pack it away in a warehouse until the following year. That would dull the gross margin erosion that a retailer would normally experience from exiting a season with too much inventory.

In the long run, T.J. Maxx, Marshalls, HomeGoods, and TJX's other brands could make big market share gains as the COVID-19 pandemic forces weaker rivals to close their doors. That long-term opportunity outweighs the near-term risk for investors, especially with TJX shares trading about 25% below the all-time high they reached in February.

Starbucks will perk up quickly

Like TJX, Starbucks is also feeling plenty of short-term pain from COVID-19. Indeed, the pandemic started hurting Starbucks before most other U.S. companies, because of the coffee titan's big presence in China. Comparable sales plunged 78% in China in February, as Starbucks was forced to close many of its stores there. Sales started to recover near the end of the month, but Starbucks still advised investors in early March that sales declines in China would reduce its quarterly earnings per share by $0.15 to $0.18. 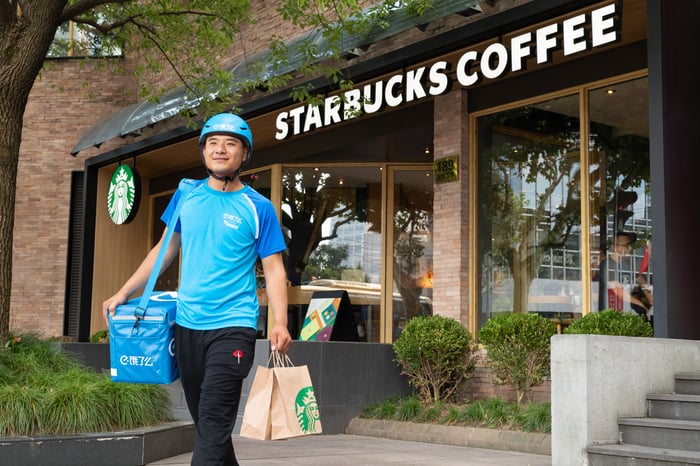 The impact of COVID-19 is likely to be far greater in the U.S., because it is Starbucks' largest market by far. Most Starbucks cafes remain open for drive-through and/or delivery service, even though the company has given employees the option to stay home through April 19 with full pay if they prefer. Still, drive-through and delivery operations won't fully offset lost in-cafe sales.

However, unlike TJX, Starbucks doesn't have to worry about an overhang of seasonal inventory that could crush gross margin. In addition, it has the financial resources to weather a temporary downturn. As of late December, it had more than $3 billion of cash and investments on its balance sheet, and it recently issued $1.75 billion of debt to further bolster its liquidity.

Most importantly, I don't expect COVID-19 to disrupt Starbucks' long-term growth trajectory. While some analysts appear to be concerned about the rise of a "stay-at-home culture," I believe there will be pent-up demand for away-from-home experiences once it is safe to mingle in public. In another demonstration of the resilient demand for its offerings, Starbucks had to end a brief experiment with offering take-out service in its cafes a couple of weeks ago because too many people were congregating in its stores. In short, Starbucks is likely to return to full strength over the next year or two, enabling a rebound in its share price.

A big opportunity for Berkshire Hathaway

To be sure, some of Berkshire Hathaway's wholly owned industrial and consumer goods subsidiaries will be hurt by the COVID-19 pandemic. Furthermore, its stock portfolio (nominally worth about $250 billion at the beginning of 2020) has suffered significant paper losses this year.

That said, the pandemic could actually lead to better results in some parts of Berkshire's business. For example, its GEICO insurance subsidiary could see lower auto insurance claims due to far fewer cars being on the road right now. Moreover, Berkshire entered 2020 with cash and short-term investments of $128 billion -- more than a quarter of its market cap -- most of which is available for investment.

In recent years, Warren Buffett has struggled to find good deals in the stock market to deploy Berkshire Hathaway's growing cash stockpile. However, the current stock market carnage represents a great opportunity for him to find bargains, just as he did during the 2008 financial crisis. Buying Berkshire Hathaway stock allows you to latch on to Buffett's investing acumen -- and his access to private-market deals.

Right now, I don't own shares of TJX, Starbucks, or Berkshire Hathaway. But all three are near the top of my watch list for April. If you can spare your $1,200 stimulus check -- as I can -- all three of these companies are likely to be great long-term investments.