Please ensure Javascript is enabled for purposes of website accessibility
Log In Help Join The Motley Fool
Free Article Join Over 1 Million Premium Members And Get More In-Depth Stock Guidance and Research
By Demitri Kalogeropoulos – Apr 1, 2020 at 11:00AM

The yoga apparel specialist recently wrapped up another successful year.

lululemon athletica (LULU 0.14%) didn't surprise many investors with its robust sales and profit growth in the fiscal fourth quarter. Sure, the retailing chain beat management's prior outlook on both the top and bottom lines. Yet it had beaten those targets in each of the last three earnings announcements, too.

There was plenty more for shareholders to like in the company's 10-K annual report that it filed on March 26, though. Let's look at a few of the standout metrics and trends from this record year for the yoga apparel business. 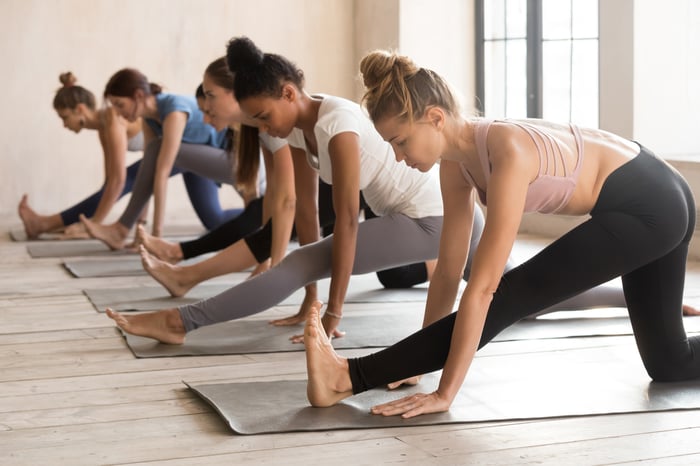 Sales rose 21% to $3.98 billion, surpassing management's annual target updated back in December. On a comparable-store basis, sales gains landed at 17%, compared with the mid-teen percentage range that executives had predicted three months ago and the low double-digit range the company initially targeted for the year. That outperformance allowed the chain to significantly outpace the $3.7 billion to $3.74 billion of revenue it had targeted in early 2019. "Our business momentum continued in fiscal 2019," management said in the 10-K.

Management has two major growth goals in addition to maximizing market share in its yoga-focused niche: Extending beyond its core demographic of athletic women, and moving outside of its geographic focus in Canada and the U.S. It made big strides on both scores.

The men's apparel business grew 34%, and Lululemon saw robust demand for its new outerwear and personal-care product lines. The international segment similarly outpaced the broader business, expanding 32% for the year.

Gross profit margin rose for the fourth consecutive year, and that metric now stands roughly 8 percentage points above where it was in 2015. Several factors supported that growth, and all of these implied a strengthening business. Lululemon cut costs despite rising Chinese tariffs, introduced popular new products, and reduced its reliance on markdowns. 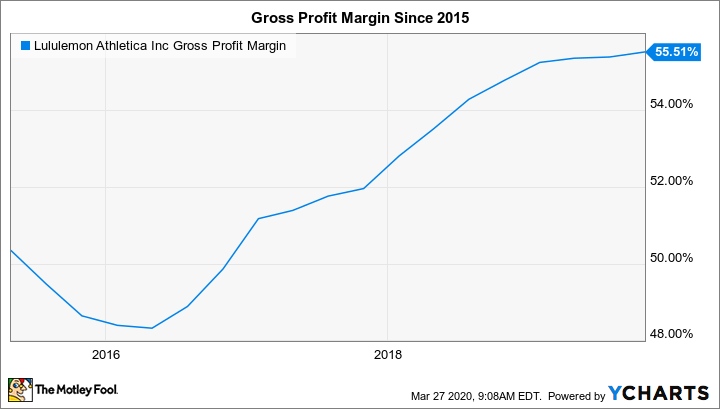 Lululemon has no shortage of attractive places to direct its cash as it looks for more growth avenues. These include innovative product releases, the online selling channel, and seasonal store launches.

Yet the consumer company still kept cost growth below the pace of revenue gains, allowing operating margin to rise to 22.3% of sales from 21.5% a year ago. Stepping back, this key earnings metric has more than doubled in three years.

The e-commerce segment was a standout performer, with gains supported by robust demand in established markets like the U.S. and the extension of the platform to places like Germany, France, and Japan. That success allowed the digital segment to surpass $1 billion in annual revenue for the first time and pushed it to 29% of sales, versus 26% a year earlier.

Lululemon's fiscal year closed just before the COVID-19 store closures in China, and then the U.S. began to affect its retailing business, and so there is every reason to expect its growth and profitability metrics to worsen, at least through the start of fiscal 2020.

Still, the company entered the crisis period with positive momentum and a robust online sales channel. Those factors might help protect Lululemon's business even as social distancing keeps shoppers away from retail stores in the U.S. and Europe through April.