Please ensure Javascript is enabled for purposes of website accessibility
Log In Help Join The Motley Fool
Free Article Join Over 1 Million Premium Members And Get More In-Depth Stock Guidance and Research
By Danny Vena – Apr 1, 2020 at 11:26AM

The iPhone maker is covering more of its hourly contractors after initially being non-committal.

After initially being told that they would sent home without pay during the extended COVID-19 lockdown, Apple (AAPL -3.00%) said that it will continue to pay hundreds of hourly contract workers, including janitors, shuttle bus drivers, and other operations employees at the company's massive campus. The move potentially could cover parking attendants, maintenance, and landscapers as well.

"We're working with all of our suppliers to ensure hourly workers such as janitorial staff are being paid during this difficult time," said Apple spokesperson Kristin Huguet in a statement. According to reports, that amounts to about 600 workers who were initially left in the dark about whether or not they would be paid during the downturn. Some had already begun filing for unemployment. 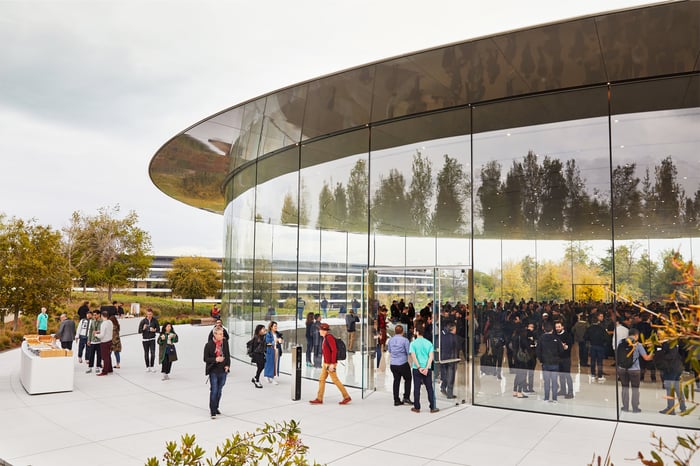 In mid-March, Apple announced that it was closing all its retail stores worldwide, with the exception of those that had just reopened in China. At the time, CEO Tim Cook said that hourly staff would continue to receive pay and company employees would become remote workers if their jobs permitted it, though the company was mum on many contract positions.

Apple has a massive cash pile on its balance sheet, with $207 billion in cash and marketable securities and just $108 billion in debt, giving the company sufficient reserves to pay its workers.

The iPhone maker isn't the only tech giant stepping up to the plate and paying its contract workers. In mid-March, social media titan Facebook (META -0.54%) said it even though it was sending all its contractors home, it would continue paying them, even those that that were unable to work remotely. All of the major tech companies have committed to paying their hourly employees, but some contract workers have been left in the cold.