Please ensure Javascript is enabled for purposes of website accessibility
Log In Help Join The Motley Fool
Free Article Join Over 1 Million Premium Members And Get More In-Depth Stock Guidance and Research
By Lee Samaha - Apr 1, 2020 at 8:04AM

The tumbling price of oil is putting oil services companies under threat, and will also affect many industrials.

The crash in the price of oil hasn't been the headline news that it might have been if the COVID-19 pandemic hadn't been front and center of attention. However, that shouldn't detract from how serious the impact is likely to be in one of the most important industry verticals in the industrial sector.

Oil and gas companies are significantly lowering their capital spending, and this is inevitably going to affect the beleaguered industrial sector, and in particular, stocks like Apergy (APY), Emerson Electric (EMR -0.40%)and industrial supply companies like MSC Industrial (MSM 0.30%). 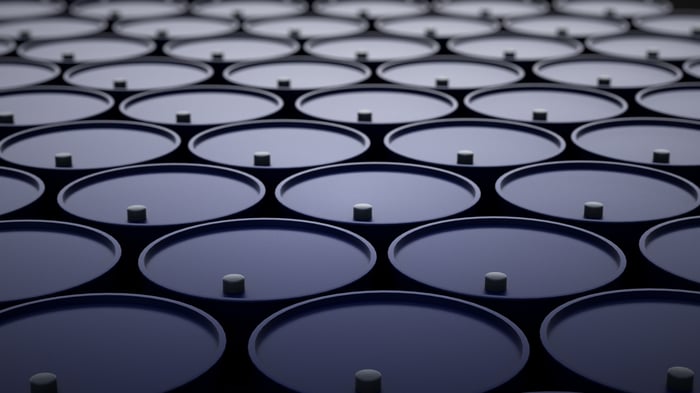 As the chart below shows, the slump in the price of oil in 2014 to 2016 caused significant cutbacks in capital spending, and it wasn't until 2017 that major oil companies started increasing spending again. 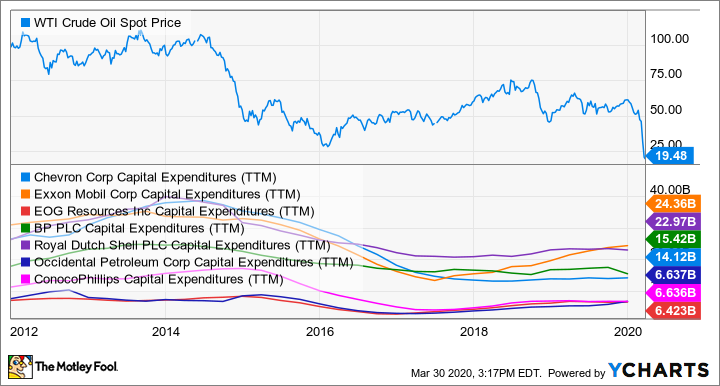 Leading into 2020, there was hope that a combination of the relative stability in the price of oil and a natural replacement demand would lead to ongoing growth. Unfortunately, just a few months into 2020 and with the price down to around $20 a barrel, the major oil and gas companies have taken the knife to the spending plans they made just a couple of months ago.

Here are the updated plans from the five largest oil stocks in the U.S., plus the two major British oil companies.

The cuts outlined above approximate to roughly a 25% cut in capital spending plans for 2020. That's obviously bad news for the oil services companies, and their stock prices have slumped accordingly. 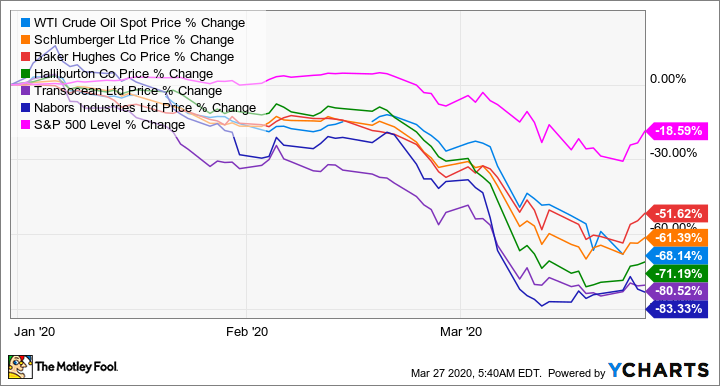 Industrial companies will also get hit

On top of the obvious candidates (oil services companies), there's also a secondary impact on the industrial companies that service and supply the oil industry and connected heavy industries. In fact, these industries were so badly hit in 2015 to 2016 that, for the first time ever, U.S. industrial production went into a recession without the overall economy being in recession. 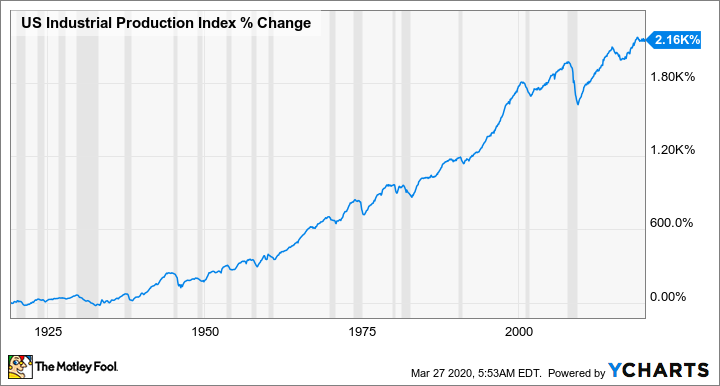 The consequences will be felt across the industrial sector, and it's likely that energy-related companies will delay or shelve major projects. Unfortunately, this is likely to hit process automation companies like Emerson Electric. The company has already seen delays in projects toward the end of 2019, but with the slump in energy prices, it's hard not to think that some of its major energy customers won't shelve some large projects altogether.

Drilling and production technology company Apergy is another obvious choice for a company that's likely to get hit hard in 2020.

Indeed, management recently announced it would reduce headcount, cut salaries, and cut its own capital spending plans by some $50 million. It's not the ideal environment to be engaging in a merger with another company tied to the upstream oil and gas industry -- in this case Ecolab's ChampionX business.

The impact doesn't stop at the heavy industries companies that service the energy industry, because if there's slowdown in their manufacturing activity, then it will be felt by their customers too.

In this context, MSC Industrial looks set to take a hit. Going back to the 2015 to 2016 period, the company's revenue growth and operating margin declined due to its exposure to heavy industries customers servicing the energy industry. It's fair to expect more of the same this year given the cut in capital spending plans from the oil and gas companies at the top of the pyramid. 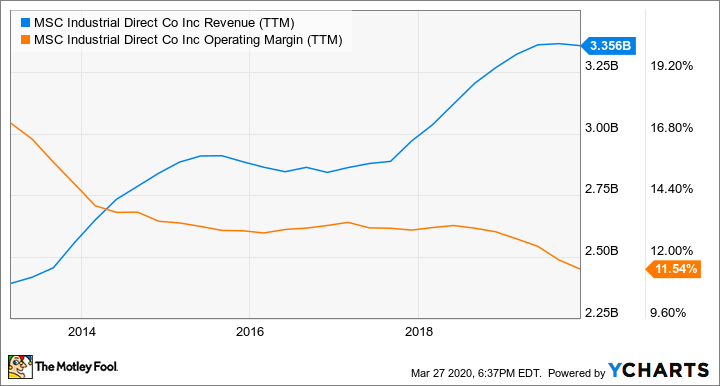 All told, it's likely to be a very difficult 2020 for all these companies, and until the demand environment (economic activity is dropping thanks to actions taken to deal with the COVID-19 pandemic) or the supply environment (Russia and Saudi Arabia are in disagreement over production cuts) improves, then the outlook is going to continue to be negative -- and Emerson Electric, Apergy, and MSC Industrial earnings continue to be under pressure.