Hopes for a quick rebound are fading.

Shares of FedEx (FDX 0.62%) traded down more than 6% on Wednesday afternoon on new projections that suggest the COVID-19 pandemic is going to be with us for some time. After losing nearly half their value in the early stages of the pandemic, FedEx shares had been trying to mount a comeback in recent weeks, but that optimism was derailed by comments by the White House coronavirus task force.

FedEx and other shipping stocks have been under pressure since the early stages of the pandemic, with investors worried that a slowdown in economic activity in Asia would lead to falling freight volumes globally. As the virus spread, the impact on the economy (and with it, shipping volumes) has grown more certain, causing dramatic declines in shipping stocks.

In recent weeks, however, the tone of the sell-off has softened in part thanks to a $2 trillion economic stimulus package that slowly made its way through Washington. 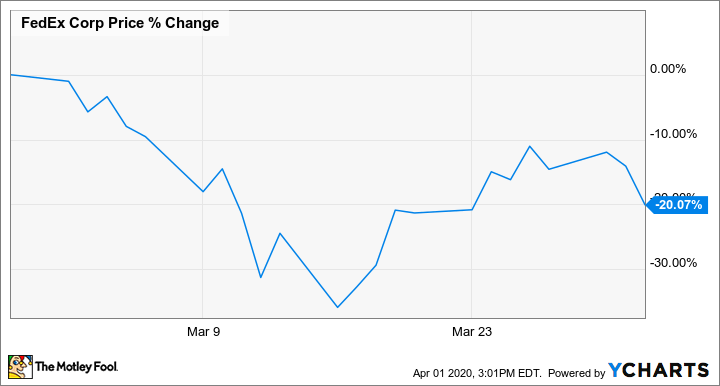 Unfortunately, any hope for a quick recovery vanished on Tuesday night. During a press briefing, Dr. Deborah Birx, one of the scientists on the White House coronavirus task force, said that more than 100,000 Americans could die from the virus even with the most-stringent mitigation measures in place.

Those comments sparked a new wave of selling on Wall Street on Wednesday, including shares of FedEx. A potential recession comes at a particularly inopportune time for FedEx, which struggled in 2019 due to trade wars and a slowdown in China. The company faced revenue headwinds at the same time it was investing billions to increase its U.S. capacity.

The plan was for FedEx to see some of that investment in U.S. capacity pay off via higher shipment volumes in 2020, but with every passing day, that payoff now seems unlikely to materialize as quickly as the company (and its investors) had hoped.

FedEx has a strong foundation and should be well positioned to rebound along with the economy. But it appears increasingly likely investors are going to need to wait for that eventual payoff.