Please ensure Javascript is enabled for purposes of website accessibility
Log In Help Join The Motley Fool
Free Article Join Over 1 Million Premium Members And Get More In-Depth Stock Guidance and Research
By Lee Samaha – Apr 1, 2020 at 9:15AM

A look at why the sector has performed so badly this year and what investors should be looking out for going forward.

Going into 2020, the industrial sector had some cause for optimism. While 2019 was definitely a difficult year that dealt with headwinds like the U.S-China trade war, cyclical slowdowns in key industries such as automotive and consumer electronics, and the grounding of the Boeing (BA -2.99%) 737 MAX, many industrial sector companies were hoping and predicting that the second half of 2020 would see a bounce back. Unfortunately, those bounce-back plans are likely to be put on the shelf.

Let's take a look at why that is and at what investors can hope for from the sector for the rest of the year. 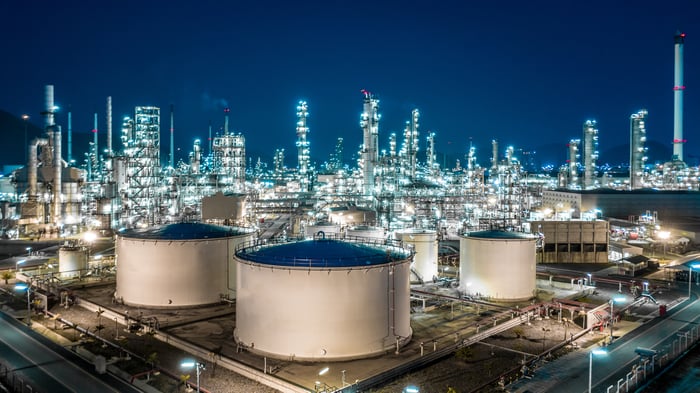 As you can see in a table of the organic revenue growth guidance for 2020, it wasn't shaping up to be a great year for the industrial sector.

However, it was expected to be a year of improvement in the second half, meaning many industrial stocks were hoping to end the year with good momentum going into 2021. Hopes were high that a natural cycle of replacement demand would kick off across the industrial sector coupled with ongoing strength in the commercial aerospace, construction, life sciences, and food and beverage sectors.

Meanwhile, semiconductors were showing signs of cyclical improvement, and the stabilization in commodity prices was supposed to induce oil and gas and mining companies to be less tentative in continuing to increase capital spending. In addition, the automotive sector looked likely to stabilize after a couple of difficult years.

Upside potential was there

There were also a few known unknowns that could serve as positive catalysts in 2020. First, an easing of the trade conflict would reduce tariff costs and ease some supply chain issues that manufacturers faced with sourcing products from China. Second, the return to service of the Boeing 737 MAX would boost aerospace growth and ripple through the industry. Third, the chart below shows how growth in the manufacturing sector -- measured here by the Institute for Supply Management purchasing managers index, where a reading above 50 indicates growth in the industrial economy -- doesn't tend to decouple from the overall economy for too long. 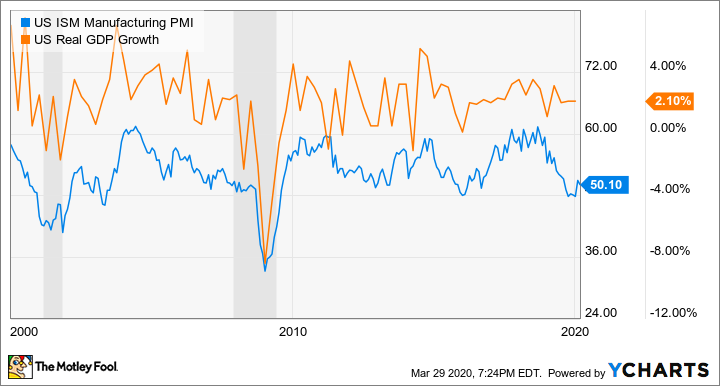 No prizes for guessing the answer. Just as it seemed the industrial sector was about to get a few breaks -- an easing in the trade conflict and less pressure on costs -- the COVID-19 pandemic came along and scuppered hopes. Most worryingly of all, the strongest area of growth in the industrial sector, commercial aviation, has been hit by travel bans as the outbreak spread internationally from its origin in China. Even if the Boeing 737 MAX is granted an early return to service, airlines can't order it if they're going bust.

Moreover, the price of oil has crashed as a consequence of a perfect storm of demand destruction and overproduction following a disagreement between Russia and OPEC on cutting production levels. As such, oil and gas companies are drastically cutting capital spending.

In addition, given the overall hit to economic growth as a result of the COVID-19 containment measures as well as enforced production shutdowns, it's not surprising to see the industrial sector under-performing the broader markets.

Aerospace and oil and gas are probably the two hardest-hit areas in the current malaise, and there's the real prospect of bankruptcies among airlines and oil producers. Clearly, oil services companies and technology providers such as Apergy will see their earnings under pressure in the current environment.

Meanwhile, Boeing and some of the largest industrial companies, such as GE, Honeywell, and United Technologies, have significant aerospace exposure, and it's far from clear how aviation demand will pan out even after the novel coronavirus is contained.

In addition, companies in cyclical industries such as mining are likely to curtail spending plans, too. All of this means companies with heavy industries exposure could be challenged across the board. That wouldn't be great news for Illinois Tool Works or industrial suppliers such as Fastenal or MSC Industrial.

The optimistic scenario is based on the idea that the market has priced in a severe and protracted economic contraction that isn't actually going to happen. It's a view supported by the fact that China already appears to have contained the outbreak and is in the process of normalizing its economy. If the same thing happens across the globe, and air travel returns as it did after the SARS outbreak in 2002-2003, then investors are likely to feel more confident.

It's a compelling argument, but it requires a number of things to go right as part of the process. Moreover, it's far from clear how governments will act in order to contain the pandemic or even prophylactically stop a resurgence -- industrial stocks are particularly hard-hit because of their global supply chains.

All told, it's going to be a year full of uncertainty for the industrial sector, and investors should be prepared for earnings downgrades even for stocks that are good long-term values. It could get worse before it gets better for the sector.