Stocks have turned down hard and fast today as the depth of the economic downturn becomes more apparent.

Shares of sportswear maker and retailer stocks are falling sharply in afternoon trading on April 1, as the economic impact of the coronavirus pandemic are becoming more apparent. At this writing, shares of these companies, which make and sell athletic footwear and apparel, are running downhill hard and fast:

Over the past week, the federal government has taken massive actions to help soften the blow to the economy, with our elected officials and the Federal Reserve enacting a massive $6 trillion in financial support for individuals and businesses. Starting on March 23, stocks rallied hard and quick, gaining almost 20% by March 30 on hopes that government action would stave off the worst of the coming recession. 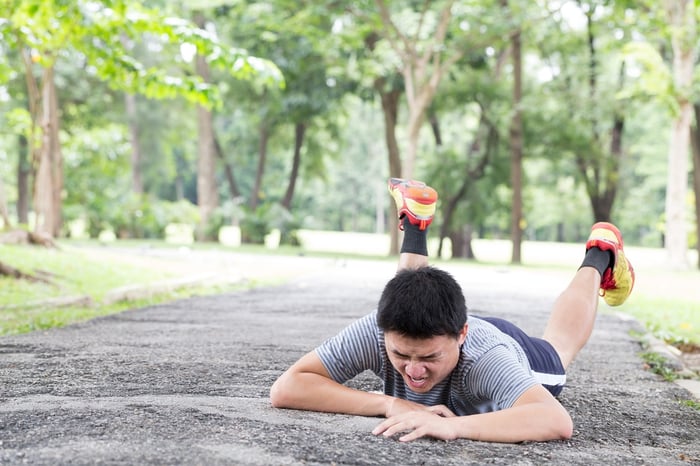 Today we are starting to see economic data showing that, indeed, the coming recession is likely already here. Several important surveys of manufacturing, payroll, and orders placed by businesses have started coming in, reporting on what businesses say they did in March. And it's not good.

The Institute for Supply Management manufacturing index fell to 49.1 in March, with any measure below 50 indicating that manufacturing is contracting. A survey by IHS Markit supported the findings of the IHS index. The IHS Market survey found that manufacturing output fell from February to March, with production and new orders shrinking at the fastest pace since the global financial crisis. The report also said prices are falling at the fastest rates in years as companies fight over every dollar they can get.

As a result, manufacturers are slashing their workforces at the fastest rate in more than a decade, and the outlook is for even more cutting and contraction to come in April.

Manufacturers and retailers that focus on discretionary goods like footwear and apparel are likely to be some of the worst affected by an economic downturn. Not only are they things consumers can do without or delay replacing, but many states and local governments have already ordered the closure of all non-essential retail stores.

All four of the companies above have shuttered their North American locations, and closed various numbers of stores in other parts of the world. Today's scary economic news indicates that, as more and more Americans hit the unemployment line, the worst could be yet to come.

But that's not the same as saying these four companies are doomed. To the contrary, as much as they could suffer in the short-term, particularly in the U.S. where COVID-19 cases are skyrocketing and much of the economy will be essentially turned off for many weeks to come, all four have strong balance sheets, with substantial cash and minimal near-term debt.

They also all feature strong global businesses, and as other countries work past COVID-19, international sales should generate enough cash flows to help keep things going. And when you look out a year or two or five, today's prices will almost certainly look like fantastic bargains.