Please ensure Javascript is enabled for purposes of website accessibility
Log In Help Join The Motley Fool
Free Article Join Over 1 Million Premium Members And Get More In-Depth Stock Guidance and Research
By George Budwell - Apr 2, 2020 at 9:14AM

Novavax's flu vaccine could be a game-changer for the company.

The clinical-stage vaccine company Novavax (NVAX 2.00%) has been one of the few bright spots in this dour market. The biotech's shares, in fact, have gained a stately 252.8% so far this year. Novavax's recent strength stems from the growing excitement over its COVID-19 vaccine program, as well as the strong showing of its flu vaccine, NanoFlu, in a late-stage trial for elderly patients. NanoFlu, in short, produced a favorable efficacy profile compared with Sanofi's Fluzone Quadrivalent in this treatment-resistant population, while sporting a fairly similar safety record compared with this Food and Drug Administration (FDA)-approved flu vaccine.

The particularly noteworthy aspect of Novavax's story is that the company's market cap still stands at a mere $722 million. The big deal is that a regulatory approval in either the flu or COVID-19 space should make the biotech's present valuation seem ridiculous in hindsight. Is this value story too good to be true, or is the market's cautious approach actually warranted? Let's dig deeper to find out. 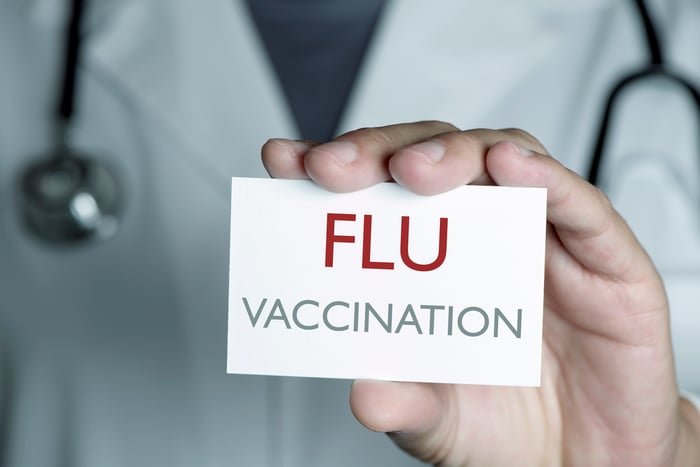 To be up front, Novavax also has another potential value driver -- an experimental vaccine for respiratory syncytial virus (RSV). As the vaccine has twice failed in late-stage trials, however, it's hard to assign any value to this RSV product candidate. The company is still pushing to gain a regulatory approval for it, but investors should probably view this effort as nothing more than a moonshot.

By contrast, Novavax's core value proposition essentially boils down to NanoFlu. Its COVID-19 program is interesting, but the fact of the matter is that Novavax is unlikely to ever benefit financially from that endeavor, beyond perhaps some modest grant funding.

There are scores of far better-financed companies, like Pfizer, Johnson & Johnson, Moderna, and Regeneron, all racing to develop effective vaccines or early-stage pharmaceutical interventions for COVID-19. Novavax, in turn, will surely have a hard time finding room at this crowded table for its vaccine candidate.

That brings us to NanoFlu. Wall Street's rather wide forecast calls for NanoFlu to generate $550 million to $1.7 billion in peak sales. Before getting to that point, though, the company still needs a green light from the FDA. The good news is that there is a well-documented need for a flu vaccine indicated specifically for senior citizens.

So the FDA might be willing to waive some of the more onerous regulatory requirements for NanoFlu in order to fill this critical gap in healthcare coverage. That being said, there is a non-negligible chance that the agency will want at least one more pivotal trial prior to approval.

Most vaccines on the market today, after all, have undergone multiple, large late-stage trials due to safety concerns. In short, investors shouldn't consider this flu vaccine a done deal. This regulatory risk is probably the main reason Novavax's market cap remains well below fair market value for a company with a promising flu vaccine in late-stage development.

The positive take here is that Novavax's stock would almost certainly triple in value from here if NanoFlu is approved. A market cap of $2.16 billion, after all, works out to only 3.9 times Wall Street's low-end peak sales estimate for NanoFlu. Numerous commercial-stage biotechs trade at well over five times the peak sales targets for their flagship products.

The negative take, though, is that the market clearly has its doubts about NanoFlu's regulatory pathway. Now, the judgment of this particular market shouldn't be taken as gospel. NanoFlu could definitely be approved during its first regulatory review and then go on to produce some healthy sales for the company in the not-so-distant future.

Nonetheless, investors shouldn't blow off the market's initial assessment, either. Regulatory reviews are never straightforward, and they always contain at least a few unexpected twists and turns.

The bottom line is that investors may want to take a cautious approach with this biotech stock, despite the very real possibility that a massive valuation gap may exist right now. Put another way, this isn't the time to build an outsized position in Novavax.