After a brutal first quarter, let's go over some of the names to consider adding to your portfolio in the month ahead.

February was rough. March was brutal. April is here, and spring could be just what your portfolio needs in more ways than one.

Dropbox (DBX 2.58%), NVIDIA (NVDA 5.92%), and Peloton Interactive (PTON 7.48%) are three stocks that I think can buck the market malaise given the new normal. The first two names are already proving resilient by moving higher in 2020, and the third investment is a company behind a product that will only gain momentum as the shutdown plays out. Let's go over why I feel that Dropbox, NVIDIA, and Peloton are hot stocks to buy in April. 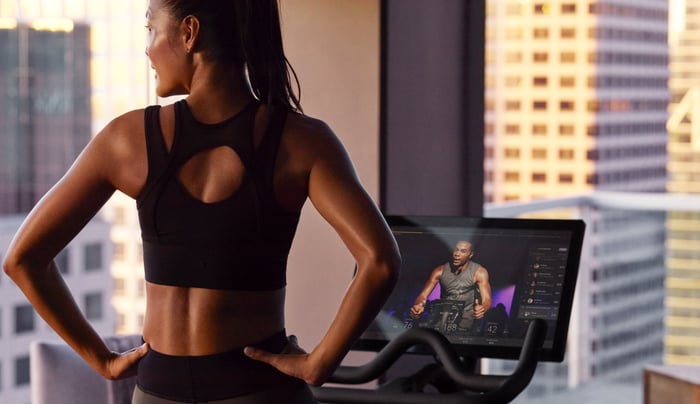 I'll begin with two 2020-relevant morsels about Dropbox that make it unique (in a good way) this year. The first is that the digital data-storage specialist is one of the few stocks that moved higher during the first quarter of 2020. Dropbox inched up a mere 1.1% through the first three months of the year, but that's enough to stand out, with most cloud-based platforms getting rocked with double-digit percentage slides so far this year.

Another thing that makes Dropbox a winner is that it's one of a handful of companies for which analysts have boosted their profit targets since the coronavirus crisis began. Wall Street was settling for a profit of $0.12 a share for the recently concluded first quarter just two months ago, and now the pros are perched at $0.14 a share. Things have gotten just as rosy for the near future, with the same analysts that saw Dropbox earning $0.59 a share this year and $0.68 a share come 2021 having boosted their bottom-line targets to $0.70 and $0.87, respectively.

The pandemic has made file portability more important. You need work files from home; you're bouncing files back and forth between family members or fellow employees. Dropbox has always found a way to grow despite facing tech giants in this niche, and it was rocking even before establishing itself as a bear-bucking winner in 2020.

Dropbox has beaten analyst earnings estimates in all seven of its quarters as a public company. After decelerating growth through its first year of trading, we've seen top-line gains hold steady, clocking in between 18.4% and 18.8% in year-over-year revenue growth through the final three quarters of 2019. Despite all the momentum heading into this year's maelstrom and its resilience throughout it, Dropbox can still be had for less than its $21 IPO price.

Another stock that meets the rare criteria of moving higher in 2020 with analysts jacking up their profit goals is NVIDIA. The leading maker of graphics processing units (GPUs) saw its stock soar 12% in the first quarter, and over the past three months we've seen Wall Street earnings forecasts move 5% to 11% higher for the current fiscal quarter, current fiscal year, and next fiscal year.

NVIDIA was a market darling, posting steady double-digit growth for years before rattling off four consecutive quarters of declines. It bounced back in its latest report, growing revenue 41% off the prior year's depressed showing. Reported and adjusted earnings posted even larger year-over-year growth spurts.

The company should fare well in this climate as gamers with more time at home invest in the graphic quality of their gaming experience. Down the road, NVIDIA remains attractive with essential semiconductor solutions for data centers and artificial intelligence.

It's becoming pretty clear that we're going to be tackling COVID-19 for more than just a couple of weeks. And it's not just investing in cloud-based data storage through Dropbox or gaming GPUs through Dropbox that should spike in popularity this month. Peloton's connected stationary bikes and treadmills were becoming a popular alternative to spinning classes and gym memberships when those outlets were still available, so one can only imagine how Peloton will grow now that folks are locked out of the group-gathering alternatives.

There were 712,000 connected fitness subscribers on Peloton's roster after the holiday-containing fiscal quarter, a 96% surge for the calendar year. The bikes and treadmills may be stationary, but its new owners are not: Engagement continues improving with workouts-per-subscriber on the rise.

Peloton's hardware and connected subscriptions aren't cheap, and that's something worth watching as the economy derails. But the stock is nearly back to where it was at the beginning of the year after surging 37% over the past three weeks. Even if the controversial holiday commercial made you cringe, it's hard to argue with momentum and results (and the same can be said about workout routines). It's risky to invest in IPOs (and Peloton is still trading just below last year's debut price), but sometimes it's worth the sweat.