Please ensure Javascript is enabled for purposes of website accessibility
Log In Help Join The Motley Fool
Free Article Join Over 1 Million Premium Members And Get More In-Depth Stock Guidance and Research
By John Rosevear – Apr 3, 2020 at 8:44AM

GM's dealers in China had to improvise to keep sales going.

General Motors (GM -1.24%) deliveries in China fell 43.3% in the first quarter, as consumers in many parts of China stayed home amid the coronavirus outbreak.

Like most global automakers, GM participates in the Chinese auto market via a series of joint ventures with domestic Chinese automakers. Those joint ventures build and sell vehicles under the familiar Buick, Cadillac, and Chevrolet brands, as well as two lower-cost brands unique to China, Baojun and Wuling. 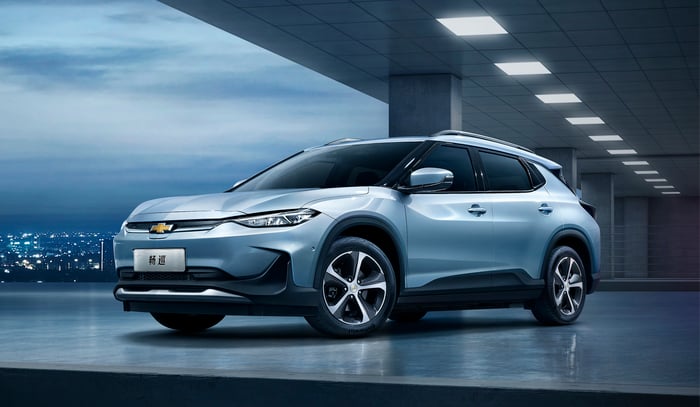 Despite strict rules imposed by the Chinese government as it battles the novel coronavirus, GM was able to launch its electric Chevrolet Menlo SUV in China in February. Image source: General Motors.

Sales of all of GM's brands fell by more than 30% in the first quarter.

While some automakers have yet to report March sales results for China, GM's decline was likely in line with the broader market's.

GM said that it adopted "new tactics" to keep some level of sales going through the pandemic, including live-streaming events and "touch-free" vehicle services that addressed customers' concerns about potential coronavirus contamination.

GM China's ambitious new-product schedule for 2020 remains mostly on track. Despite the constraints of the Chinese government's anti-coronavirus measures, GM was able to launch a new vehicle in China in February, a battery-electric Chevrolet SUV called the Menlo.

It plans to launch the Chinese-market versions of the Cadillac CT4 sedan and the Chevrolet Blazer SUV in the second quarter, with other new models following later this year.

General Motors will report its first-quarter earnings results on May 6.