Pixar's latest release hits Disney+ early, and most of its theme park cast members are facing an uncertain future.

It's been four weeks since Onward hit movie theaters, and on Friday, the Disney (DIS -1.28%) animated feature became the latest addition to its growing Disney+ catalog. In theme park news, Disney announced on Thursday afternoon that it would be furloughing nonessential executive, salaried, and nonunion hourly employees across its two domestic resorts come April 19.

With no clear visibility on when its theme parks will be able to entertain guests again, Disney is making the difficult decision of cutting some financial ties with its displaced workforce. It will continue to provide health coverage -- for now -- but once again, Disney is moving "onward" after facing another curveball pitch. 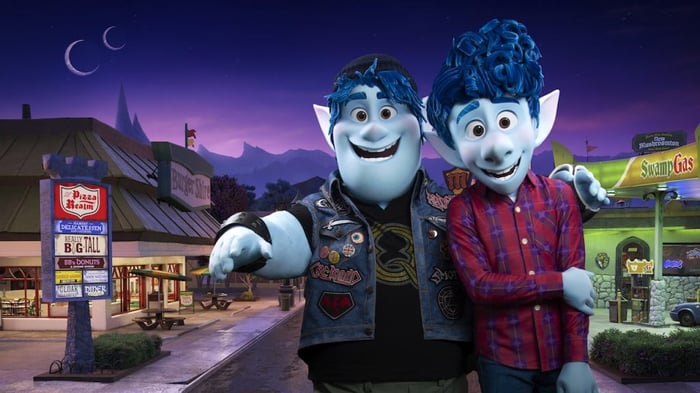 Onward never stood a chance at the local multiplex with its March 6 release date. Coronavirus concerns were starting to percolate, making families hesitant to chance a social outing. It was the top domestic draw through two weekends, but Onward rang up just $61.6 million in ticket sales. It will go down in history as Pixar's biggest theatrical flop, with a beefy one-time charge to follow.

The decision to move quickly into digital distribution makes sense. Disney chose to make the film available for digital purchase on March 20, cashing in on all of the money that it had invested in marketing the well-reviewed computer-animated feature. It could've sat on the film for a couple of months, waiting for theaters to reopen, but would moviegoers turn out in large numbers to see a film that had already hit the big screen earlier in the year?

The push to add the movie to Disney+ just two weeks after the digital release will be a little more debatable from the financial side. It could be the entertainment that home-tethered families need right now, but knowing that it would be available on the aggressively priced $6.99-a-month streaming platform likely ate into the digital sales over the past two weeks. If you're a big enough Disney fan to want to buy Onward as a digital release, you were probably already a Disney+ subscriber.

The furloughing news follows Disney extending paid leave for its employees for a second time since Disney World and Disneyland closed down in mid-March. Just as movie theaters aren't available as a revenue stream for Onward, theme parks are no longer available as revenue generators for Disney to indefinitely keep up with the paychecks. No one knows when the crisis will end, and continuing to shell out for health insurance and postsecondary education benefits is a good look in an otherwise gloomy portrait for the amusement and theme park industry.

With economists now generally unanimous in calling for a global recession, Disney's biggest concern isn't a movie that flopped for exhibitors or even how long its iconic theme parks will remain closed. The big unknown now is what the state of the economy will be when your local multiplex and Disney theme park begin popping popcorn again. Will folks still be able to pay for a Disney getaway? Will even the two-hour escapism that a theater outing provides be considered a frivolous budget consideration? Disney is moving Onward and onward -- and it better hope that the economy is willing to move onward, too.