Please ensure Javascript is enabled for purposes of website accessibility
Log In Help Join The Motley Fool
Free Article Join Over 1 Million Premium Members And Get More In-Depth Stock Guidance and Research
By Donna Fuscaldo – Apr 3, 2020 at 8:25AM

With a strong balance sheet, more recurring revenue, and a diversified business, Microsoft is well-positioned to return to growth.

Like many other companies have done in the past several weeks, Microsoft (MSFT -1.94%) last month issued an earnings warning related to the potential adverse effects of the coronavirus pandemic. But unlike some of them, the tech giant is poised to emerge in a stronger position once the economic downturn has run its course.

That wasn't the case for Microsoft after the Great Recession of 2008-09 when it struggled for several years to fully recover. But this is also a much different company. At least that's the message Microsoft CEO Satya Nadella is sending to investors. In a recent interview, Nadella expressed confidence that Microsoft will come out of the pandemic "pretty strong." The CEO pointed to the software giant's "great balance sheet" and what he called a diverse business that consists of a bigger mix of annuity and non-annuity revenue than it had when the financial crisis hit 12 years ago. "We will weather the storm," the executive said.

It's a sentiment shared by investors. Despite the steep sell-off in the broader market during March, Microsoft has been resilient. Shares tanked 13% from mid-February to mid-March, but have been able to recover some of the losses since then. Year to date Microsoft shares are only off 4%. The company still boasts a market capitalization of more than $1 trillion. It's also been making moves during the pandemic to position itself for the strength Nadella has been talking about. 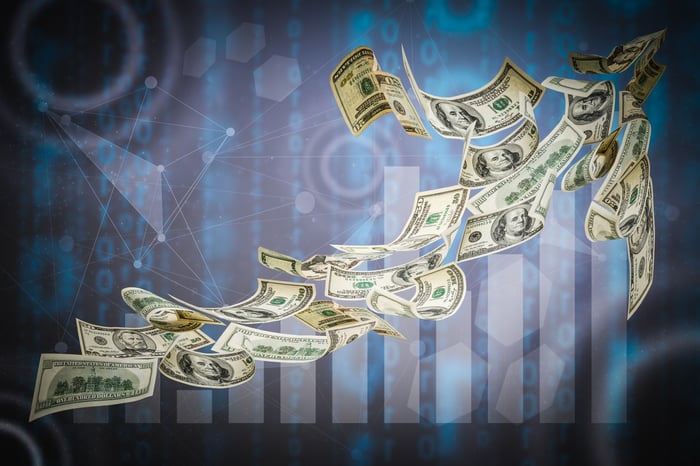 For instance, consider the annuity side of its operations. Earlier this week, Microsoft announced a rebranding of Office 365, its cloud-based service that boasts more than 38 million subscribers, to Microsoft 365. In addition to including more artificial intelligence-powered features, Microsoft is launching a subscription plan for individuals and families that costs $6.99 and $9.99 a month, respectively. It's part of Microsoft's efforts to get more consumers to use its cloud-based software and move away from having to get consumers to upgrade their OS every few years.

It also gives Microsoft more annuity-like revenue. The more recurring revenue Microsoft has, the more reliable its results will be. In its fiscal second quarter, Microsoft reported Office consumer products and cloud services revenue increased 19%, driven by the continued growth of Office 365 consumer subscribers. New features, such as the ability to track spending in Excel or get feedback when practicing a PowerPoint presentation, should drive more subscribers Microsoft's way. Paid users also get 60 Skype minutes and access to Teams, its digital collaboration tool.

It also helps Microsoft shift away from the PC software business, which has seen a decline in demand in recent months. It's the reason Microsoft issued its earnings warning for its fiscal second quarter in late February. It said at the time that it didn't expect to meet its revenue guidance for the More Personal Computing unit, which includes Windows OEM and its Surface products.

But since then, things have changed on the PC side of the world. With millions of people around the world sheltered in place to slow the spread of the coronavirus, demand is picking up for laptops, monitors, and other computer peripherals. According to NPD, in the first two weeks of March notebook PCs saw a 10% increase in sales, while business notebook sales increased 50%.

Demand for Microsoft's other products is also surging amid the COVID-19 outbreak, including Skype, the video conferencing service Microsoft acquired in 2011 for $8.5 billion.

Outside of Office, Microsoft has a profitable and growing cloud business that is seeing demand surge during the pandemic. Its average daily users increased to 40 million, marking a 70% increase month over month. There's also been a 220% increase in Skype calling minutes. Meanwhile, Teams recently surpassed 44 million daily active users, more than double the 20 million it had in November. Demand is also rising for Windows Virtual Desktop and Power BI, applications powered by Microsoft's Azure cloud. That's resulted in a 775% increase in cloud services in regions that are enforcing social distancing and/or shelter-in-place orders.

All of those new users and usage won't go away once the virus is contained. The pandemic has changed the way we work, and that could last well into the future, resulting in increased demand for Microsoft products. Fitch, the credit rating agency, said as much this week when it affirmed Microsoft's AA+ rating outlook on $70 billion of debt. Fitch pointed to Microsoft's cloud and server products as driving growth and mitigating the weakness from the PC business. The adaptation of Office software products in the cloud decouples Office from PCs, Fitch noted.

On top of all that, Microsoft entered the pandemic with a strong balance sheet of $134 billion in the coffers, and it generates more than $30 billion in sales each quarter. With Wall Street expecting Microsoft to report 11% revenue growth in fiscal 2021, there's a lot of reasons to suggest that the software giant should emerge from the COVID-19 pandemic stronger.