Please ensure Javascript is enabled for purposes of website accessibility
Log In Help Join The Motley Fool
Free Article Join Over 1 Million Premium Members And Get More In-Depth Stock Guidance and Research
By Daniel B. Kline – Apr 3, 2020 at 8:45AM

The Chinese coffee company has admitted that its sales numbers were not reported correctly.

When a company gets hit by a scandal and its stock plummets, your first instinct may be to sell and cut your losses. It's to come to that conclusion about Luckin (LKNC.Y -1.32%) a fast-growing coffee chain in China that has admitted that its COO fabricated sales by about $310 million.

It's disturbing news from a company that has spent heavily to battle Starbucks (SBUX 1.82%) in China. Despite that, it's important to take a step back and evaluate what has happened, how the company has handled it, and where it might go next. 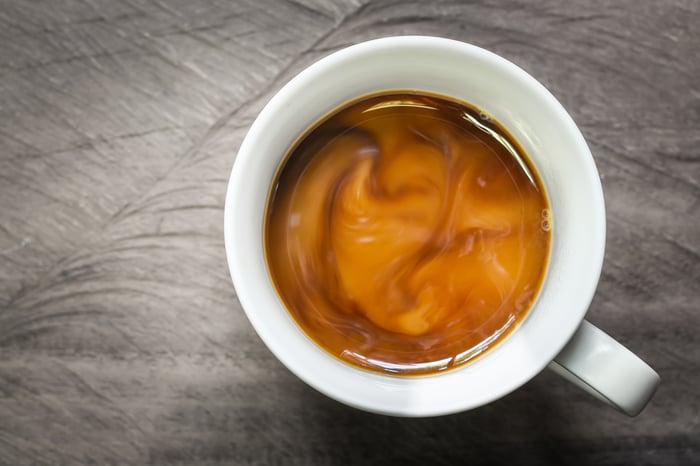 What has Luckin done?

The company released a media statement saying that it became aware of the discrepancy during an internal audit of its financial statements for 2019. It has admitted that "the information identified at this preliminary stage of the Internal Investigation indicates that the aggregate sales amount associated with the fabricated transactions from the second quarter of 2019 to the fourth quarter of 2019 amount to around RMB2.2 billion ($310 million)," according to a press release.

Luckin also acknowledged that "certain costs and expenses were also substantially inflated by fabricated transactions during this period."

The coffee company also said that the numbers it's now reporting have not been verified by its newly appointed special committee to investigate this issue, its advisors, or its independent auditor. It's worth noting that Luckin issued a vehement denial in February when a report was issued by what it called "a short seller who may benefit from this meritless report," that accused the company of many things it's now admitting happened.

At the time, the company reaffirmed its numbers. Now, Luckin has done the opposite:

Investors should no longer rely upon the company's previous financial statements and earning releases for the nine months ended September 30, 2019 and the two quarters starting April 1, 2019 and ended September 30, 2019, including the prior guidance on net revenues from products for the fourth quarter of 2019, and other communications relating to these consolidated financial statements. The investigation is ongoing and the Company will continue to assess its previously published financials and other potential adjustments.

That's clearly bad news, and it's possible the numbers or the deception will be worse but that does not mean you should sell your shares in the company. In reality, if you believed in the company's business model you should wait for all the data -- including the report by the special committee as well as any audits.

It's hard to hold

Selling any stock when it drops 80% or more hurts but if you no longer believe in the company it might be the right move. In this case, as an investor, you don't know if Luckin just faces a longer road to success or if this means it won't succeed.

This was always a long-term play. Taking on Starbucks, even when you're the home team, is not an easy feat. Luckin has been investing heavily in growth and losing money in an attempt to take market share from Starbucks (or win new customers before its big rival).

Please don't buy on the dip but be careful about selling. Wait until you see the real numbers and then decide whether the road just got longer or the company drive into a brick wall it won't recover from.